Gun News of the Week: Nuked Filibusters Aside, Gorsuch to Join Supreme Court This Month

What's new in gun rights, gun control, the states, and the courts 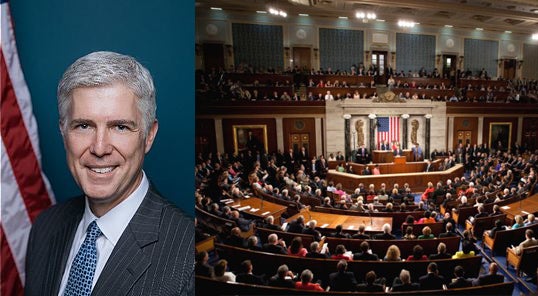 Nuked Filibusters Aside, Gorsuch to Join Supreme Court This Month

The Senate Judiciary Committee in an 11-to-9 partisan vote sent Judge Neil M. Gorsuch’s Supreme Court nomination on April 3 to the full Senate where Democrats appear to have the votes to filibuster and Republicans appear to have sway to bust that filibuster by imposing the “nuclear option” and endorsing the late Judge Antonin Scalia’s replacement in a simple majority vote.

That, in a nutshell, is what is expected to unfold beginning April 4. Also expected to spill out onto the Senate Floor is the contentious tenor that marked three days of blistering testimony and subsequent commentary and debate preceding the Judiciary Committee’s narrow vote.

According to the Associated Press, Republicans want to confirm Gorsuch by Friday, April 7, when their two-week Easter recess begins. If confirmed then, Gorsuch could join the high court in late April and participate in the final cases of this year’s term, which will end in June.

The drama will be in if the Democrats have the votes necessary to filibuster Gorsuch’s nomination. If fewer than eight Democrats join Republicans in supporting confirmation, the filibuster cannot be broken under current rules.

Unless Republicans change the rules. Which is what they’ve vowed to do by invoking “the nuclear option,” which would allow Gorsuch to be confirmed by a majority vote … just in time for Easter recess.

— A showdown vote on Gorsuch this week

— Are firearms with a silencer ‘quiet’?

— Why Doctors Should Not Ask Their Patients About Guns

— Congress takes on legislation to loosen access to guns

ARTIFICE OF THE DEAL

That’s one scenario outlined in Robert Draper’s March 26 New York Times’ story about “how Trump might handle his predicament in Congress, stuck between Democrats on the left who refuse to deal with him en masse and a Freedom Caucus on the right that’s willing to walk away from any legislation that’s short of true fiscal conservatism.”

According to Draper, Trump’s growing frustration with the ideological obstructionists of the Freedom Caucus, a refiner-grade spawn of the Tea Party, may induce him to seek “bipartisan packages with plenty of goodies for Democrats.”

The best example of how Trump is already doing that is his relationship with his “favorite Red-state Democrat,” Sen. Joe Manchin of West Virginia.

Manchin met face to face with the president-elect in Trump Tower in December where he allegedly received a pep talk from Steve Bannon that Trump “doesn’t care about the Republican Party and he doesn’t care about the Democratic Party. He just wants to put some wins on the board for the country.”

In the meeting, Trump promised to support Manchin’s Miners Protection Act, which would secure health benefits and pension funds for retired miners.

Later that same month, Manchin offered comments on the fourth anniversary of the Sandy Hook mass shooting on MSNBC’s ’Morning Joe’ show, which Trump apparently watches. Within an hour, according to what Minchin told Draper, Trump called his cellphone to say he envisioned “a complete opportunity” for new gun-safety legislation.

Manchin told Draper: “Unlike with Obama, ‘no one thinks President Trump would do anything that would take away your gun rights.’”

“Given his unpopularity, nationally and especially with the Democratic base, it would require a verrrry sexy bit of bait to get Democrats to come to the table and talk horse-trading with Trump,” writes AllahPundit on Hotair.com. “Gun control might do the trick.”

Allahpundit, is an anonymous blogger and the senior editor for political news and commentary in Libertarian-leaning Hot Air, said a Trump gun control peoposa cannot be associated with the over-the-top hysterics of gun control zealotry, but could be something with “compromise” in its name — such as the “Compromise” Background Checks bill Minchin co-sponsored with Sen. Pat Toomey, a Republican from Pennsylvania.

The bill proposed to expand background checks to all sales at gun shows and online, regardless if the seller was a licensed dealer or sold guns regularly, with an exception for transactions between family and friends.

Polls indicated the proposed bill was popular with 65 percent of Americans saying it should have passed and 83 percent saying they favor a law in principle that would require background checks on all gun purchases.

Gun control by reviving the Manchin-Toomey Background Checks bill could help Trump foster “a centrist coalition” of 120 Republicans and 100 Democrats in the House. “if he does,” Allah Pundit predicts, “it’ll send a message loud and clear to the Freedom Caucus that he doesn’t need them to govern.”

— Trump vs. Congress: Now What?

— Trump vs. Congress: Now What?

— ‘Democrats Are Good For Gun Sales’: Guess What Happened After Trump’s Election

— Rant of the Week: The Firearm Industry is Alive and Well

The Georgia House and Senate both approved after midnight on March 30 — the traditional end to the legislative session — a compromise measure that would permit licensed gun owners to carry concealed handguns on public college campuses.

Gov. Nathan Deal — who vetoed a similar measure last year — has until early May to sign or veto the bill.

Right now, Georgia is one of 17 states that ban weapons on college campuses.

Majority Republicans in the General Assembly argue people who’ve gone through the state’s licensing process should be able to carry a weapon if they choose.

Several lawmakers told the Associated Press they were “confident” that Deal will sign it. Deal has said little about this year’s measure, which address three things he objected to in last year’s bill by providing exemptions for on-campus preschools, disciplinary hearings and areas where high school students attend college classes.

— Carrying concealed gun without a permit? NC bill would allow it

— New Mexico: So What Was The Big Deal About HB50?

An “unusually high” number of gun control groups — including the Brady Campaign to Prevent Gun Violence and the Law Center to Prevent Gun Violence — in late March filed papers with Connecticut Supreme Court for permission to argue against a judge’s October decision to dismiss a wrongful-death lawsuit against Remington because it was the maker of the rifle Adam Lanza used in the 2012 Newtown school shooting.

Saying the ruling “would set a bad precedent,” the renewed filing seeks to hold Remington accountable for selling what they allege is a semi-automatic rifle that is too dangerous for the public because it was designed as a military killing machine.

In October, State Superior Court Judge Barbara Bellis ruled that the lawsuit filed by some of the Newtown victims’ families against Remington Arms wasn’t allowed because of a federal law — the 2005 Protection of Lawful Commerce in Arms Act (PLCAA) — shields gun makers from liability, in most cases, when their products are used in crimes.

A survivor of the attack and the families of nine killed are appealing Bellis’ October ruling to the state Supreme Court in a case that centers on “exceptions” to the PLCAA that gun control advocates want to see of they can exploit in a potentially friendly court.

The high court does not have to accept the proposal and can, in fact, deny permission to file new briefs in the case.