The Best Semi-Automatic and Pump Shotguns for Left-Handed Shooters

The market is more limited for left-handed shotgunners, but there are still some good options if you shoot southpaw 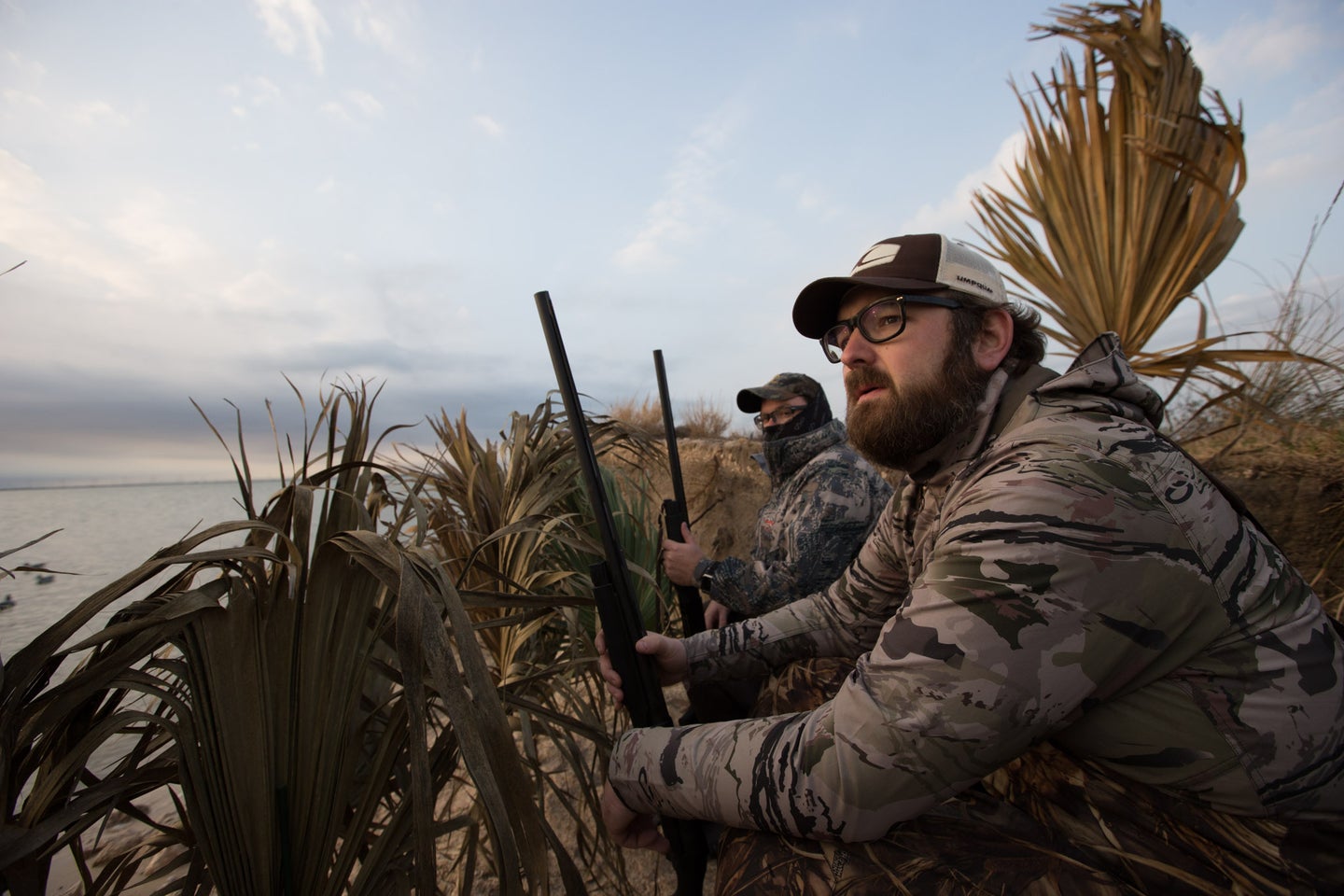 Like many traditional hunters, my father taught me how to shoot a shotgun. But as it turns out, he didn’t know what the hell he was doing. The most basic starting point for shotgun shooting is determining your eye dominance. If your right eye is dominant, you should shoot right-handed; left-eye dominance means you should be shooting lefty.

Many beginners and even seasoned hunters figure they should shoot with their dominant hand. If you write or throw a baseball right-handed, you’re a righty. I presume that’s what my old man thought. And so for years, I shot right-handed.

It wasn’t until I was in my late 20s that a shooting instructor noticed there was something way off with my point of aim. I wasn’t shooting poorly overall, but when I missed, they were extraordinarily bad whiffs—I was several feet behind the clay bird, particularly on left-to-right crossers. I found out that day that I was left-eye dominant. After years of shooting right-handed, I switched to southpaw.

It’s one of the best decisions I’ve made in terms of being more accurate with a shotgun, but it’s also now a pain in the ass to find guns that truly fit me. Most shotguns are built for the right-handed shooter because most folks shoot right-handed. I’ve spent the last 15 years reaching my shooting finger over or under the trigger guard to click off the safety of shotguns built for right-handers. Most modern shotguns are built with a reversible safety, but it’s still inconvenient for true left-handers to load a righty shotgun and watch shotshells fly by their face with each pull of the trigger.

If you shoot left-handed, there are some better options out there than simply switching the safety over on a right-handed shotgun. A true lefty gun will be a better fit, which means you will be more accurate on birds and clay targets. Here are some of the best shotguns for southpaws.

No other manufacturer is more interested in making shotguns for left-handed hunters than Benelli. The Super Black Eagle, M2, and Montefeltro are all available in lefty. Anytime Benelli debuts a new semi-auto shotgun it’s almost guaranteed to be available in a left-handed model the following year. I’ve shot the SBE2 in lefty for many seasons. It was the first true left-eject gun I ever owned. Benellis have always fit me well, but the left-handed model made a definitive upgrade in my shooting ability. The only drawback is that since I am not a left-hander, but left-eye dominant, my mount is a little bit weaker. That can lead to shotshells hanging up in the action of inertia-driven shotguns, because I don’t place the stock in my shoulder correctly with as much consistency as I’d like. And inertia guns need that backstop to reliably cycle shotshells. If you want a 3-inch gun for half the price of an SBE, Benelli’s sister company Franchi makes the Affinity in a left-handed model. It’s built on the same operating system as the Benelli guns.

Big Green has been making a variety of shotguns for left-handers for decades. Its most popular guns, the 870, 1100, 11-87, and VersaMax are all configured for lefties in a smattering of different gauges. The 1100 is by far my favorite Remington of all-time and I have had a few opportunities to shoot the left-handed model. I wasn’t disappointed. It had the same reliable functionality you would expect from the 1100 and swung slightly better for me than the right-handed version. It’s also available in a 20-gauge LH model. The 870 is the right way to go if you want a more affordable sub-gauge. I’ve been looking for a left-handed Express in 20-gauge for the last few years, but have yet to come across one. Gun shops and online stores are the best places to find these old Remingtons for now.

One of the softest-recoiling guns to ever come out of Italy, the gas-operated A400 Xtreme is one of the few autoloaders that costs over $1,800 and is fully worth it. I’ve never had an issue with the A400 except for a few times when it got extremely dirty after serval days of lying in the dry fields of Saskatchewan. Early models of the A400 had trouble cycling 3.5-inch high-velocity loads, but it’s not much of an issue anymore. You can’t ask for a more well-balanced gun than the A400. It’s a hefty shotgun, but that heft makes you a better shot because you’re not whipping it around like a lighter inertia-driven gun. And if I have to borrow a gun, I always hope it is a Beretta. The autoloaders seem to fit everyone well, and the safety is at the front of the trigger guard , which makes it easier for a lefty to shoot a right-hander’s gun. Benelli, Winchester, Remington, and others place the safety at the back of the trigger guard, and frankly, it sucks for lefties. It’s also less safe because you can’t really push the button over when the gun is at your shoulder. You have to do it before as you bring the gun up to a full mount.

If you have ever wanted to own a Beretta but couldn’t afford one, the Viper G2 is a good alternative. TriStar models its shotguns after the Beretta platform. They are reliable gas-operated semi-autos that won’t drain your bank account. The G2 black synthetic 12-gauge can be had for under $650. It’s a 3-inch gun with a 28-inch barrel and three Beretta-style chokes (IC, M, F). The Viper is made by Armsan, a respected Turkish manufacturer. I’ve never had a single functionality issue with a TriStar gun. The only gripe I can think of is when, during a round of skeet, a .410 loosened where the stock meets the receiver. But a twist of the screwdriver fixed that. They are workhorse guns at a fair price.

I grew up shooting this gun, so I’m admittedly partial to it. But it’s true that the BPS is a great choice for lefties: it has a tang-mounted safety and is a bottom-eject shotgun. There’s no reaching across the trigger guard or swapping the safety out with the Browning pump. It’s also a very easy gun to operate. The loading port is also where spent shells eject from. John Browning actually designed that system, which was utilized by the Remington Model 17, Model 31, and Ithaca’s Model 37. In order for the gun to cycle shells, the steel bolt locks into place inside the magazine, and the dual lifters bring a new shell into the chamber after the shooter ejects the spent shell and slides the fore-end forward. The BPS is a fast-cycling gun because of Browning’s unique invention. It’s also easy to unload. You don’t have to shuck each shell out; instead, just depress a button located in the receiver.

The Mossberg 930s, 500s, and 835 Ulti-Mag also have tang-mounted safeties, though none of them eject shotshells from the left side of the gun. I shot the 935 Pro Series on my first sea duck hunt years ago and it performed flawlessly. Shooting eiders, scoters, and long-tailed ducks is much like shooting 50- to 60-yard crossers in sporting clays. Except on sea ducks you are shooting in 10°F with a stout wind and cold ocean spray blasting you in the face every five seconds. So it’s nice to have a gun that swings easy and makes these challenging shots less difficult. Once I found the proper lead, the 935 did its job. I’ve never had so much fun shooting a shotgun as I did on long-tails—seemingly gassed up on rocket fuel—that ripped along the edge of the decoys. The 935 feels a little like cheap plastic in some spots and the fore-end isn’t exactly flush with the receiver, but Mossberg builds guns for the working class, and this one certainly fired every time I needed it to.