Whether you’re and entry-level shooter or a long-time enthusiast, there is a sporting clays shotgun fit for you 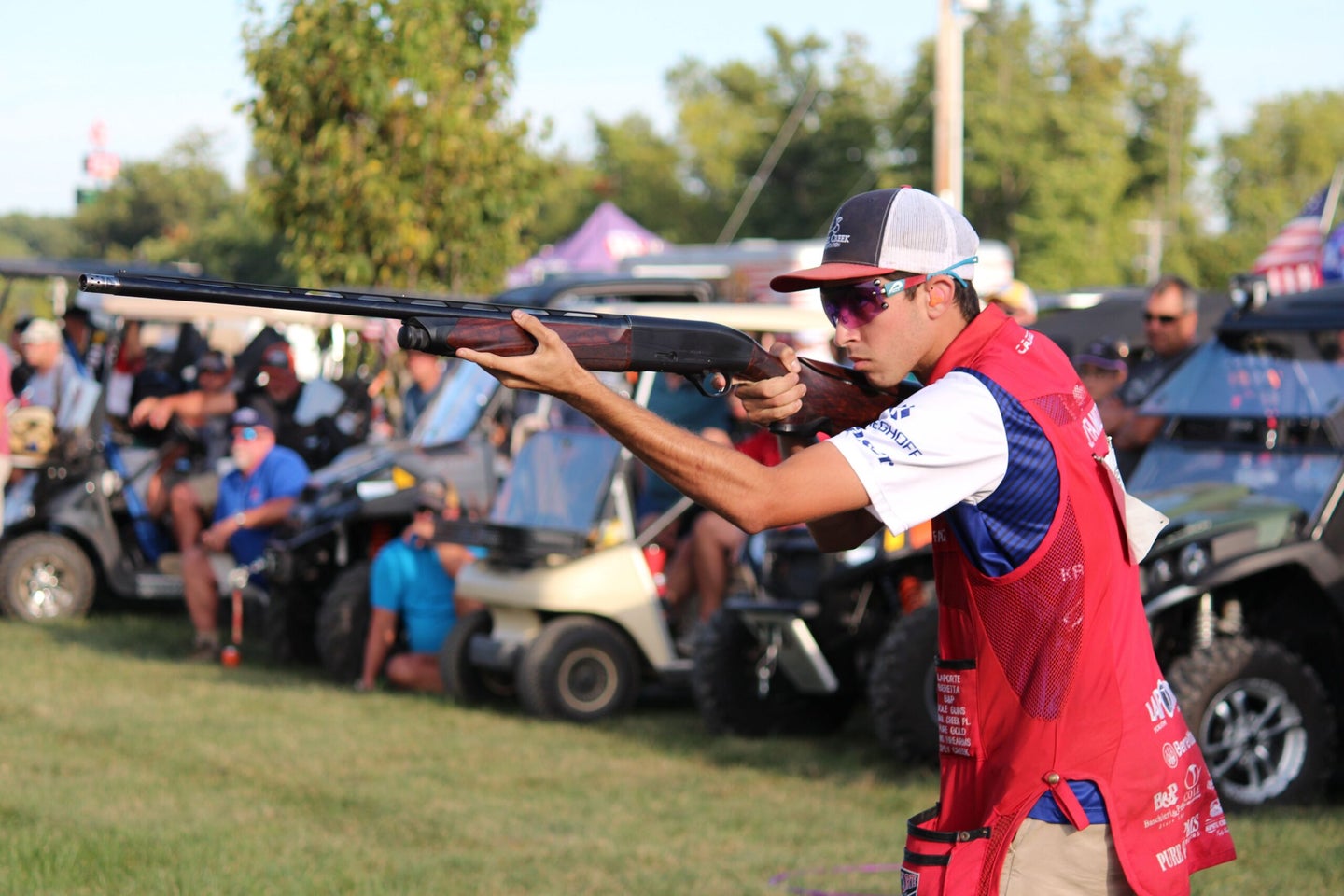 Sporting clays is the most challenging of the shotgun sports. It’s also become one of the most popular because, well, it’s fun. Also, every sporting clays course is unique, unlike American skeet and trap, which is the same at any range you shoot. Sporting clays gives you the opportunity to attempt a variety of difficult shots that require good form and shooting instincts as opposed to the muscle memory you need to excel at skeet or trap.

And although you will see many professionals shoot high-priced over/unders on sporting clays, the casual shooter doesn’t need to spend tens of thousands of dollars on a shotgun. For instance, if you are a wingshooter, your duck or pheasant gun (properly choked) is likely ideal for sporting clays.

If you are thinking about getting into sporting clays, or are a hunter who wants to sharpen his shooting skills, or an advanced target shooter, looking to upgrade to a shotgun that was built specifically for this pursuit, here are three great options for beginners, intermediate, and experienced shooters.

Which Shotgun Platforms Are Best for Sporting Clays?

Since you will need a gun that holds at least two shells to shoot sporting clays, single-shot guns are out. That leaves over/unders, side-by-sides, pumps, and auto-loaders as suitable sporting clays firearms.

Over/unders are the most popular style of sporting clays shotgun among those who want to purchase a shotgun specifically dedicated to this pursuit. Over/unders come in a wide range of price points. A serviceable double starts around $1,000 and the high-end break-actions will cost north of $30,000.

Over/unders are more reliable than semi-autos because they don’t have to cycle spent shells for the gun to function, and they generally break clays better if you buy one that has been built for clay shooting. The reason for this is stocks on over/unders are more likely to be cast dependent on what hand you shoot with. Right-handers will have more cast on the right side of the stock, and vice-versa for lefties. Most over/unders have longer barrels—from 28 inches up to 34 inches—which makes for a smoother, balanced swing on clays. Some doubles will also have ported barrels to tame recoil and make it easier to get on the second clay bird.

Auto-loaders remain a sporting clays favorite. Even some professionals shoot them as opposed to the more popular over/unders. Beretta’s gas-operated models are shooter favorites because they fit a variety of different body types and pattern evenly. Many women and youth shooters enjoy shooting the early 300 series Berettas, which is proof they have a remarkable fit as they were not designed for the shape of the female body, or for teenagers, but both generally shoot them well.

Gas-operated semi-autos have the added benefit of dampening recoil, making them extremely comfortable to shoot. They are not overly expensive, and if well maintained, will provide reliable service. The downside of gas-operated autoloaders is that they get dirty, particularly with cheap ammo. This means a regimented gun cleaning is necessary to avoid a shell hanging up in the action when you’re trying to break the second clay.

Side-by-sides are historic shotguns traditional grouse, quail, and duck hunters gravitate toward. Because many hunters use the clays course as an annual hunting season tune-up, you’ll sometimes see shooters with a side-by-side in hand. National Sporting Clays Association-sanctioned events often hold a separate side-by-side event. Pump-action enthusiasts can also shoot in their own division.

There aren’t many side-by-sides specifically designed for clay shooters, but there are double guns that shoot well enough to get the job done. Beretta, Fabarm, Rizzini, RFM, Fausti, F.A.I.R. and CZ-USA are just a few of the manufacturers that make fine double-barrel shotguns.

Pumps are reliable, but you also must work the action manually to load a second shell and then get the gun on a speeding clay. But in this shooting discipline, you often have the time to pump the gun and crush the second target. There will be some stations that are more demanding and require a quick second shot, but if you can break doubles on skeet with a pump gun, you can do the same on sporting clays.

I’m a serious clays shooter, but if I were just starting out and wanted a mechanically reliable, yet relatively inexpensive shotgun, I would select a CZ-USA 612 Field. The 612 runs superbly on the sporting clays field. I’ve shot one, and it’s a fine-pointing clays gun. I wouldn’t hesitate to carry it while tromping through pheasant fields or sitting in a duck boat blind. These guns look nice, shoot well, and are mechanically bulletproof. The simplicity of a pump-action gun means there’s very little that can go wrong. It can get dirty and wet and still operate to its potential.

The 612 Field features a 28-inch barrel with ventilated rib, which along with the added action length of the pump gun receiver, brings the overall length to 49 inches, which is about as short of a sporting clays gun as you want to use if you’re an adult male shooter. Available in 12-gauge, it features three removable choke tubes and a 3-inch chamber. This is a no-frills gun that should last several generations if properly cared for. It’s a versatile gun as well. You can shoot clays and hunt any bird species with it. And it costs under $400.

I’m a long-time Beretta loyalist. Their shotguns are reliable, and most shooters shoot them well. Some of the best sporting clays shooters in the world rely on them, like Scott Robertson or Joseph Fanizzi.

Beretta has a long lineage of auto-loaders, the most recent of which is the A400. The A400 replaced the ever-popular 391 platform, which in turn replaced the 390.

Ask any reputable sporting clays instructor and he or she will tell you an auto is a good way to go when starting to get serious about the clays game. They’re not too expensive, and customized parts are readily available, allowing you to balance and adjust the gun to your liking and shooting style.

The Beretta A400 comes in close to 20 model variations, but for the sake of this article we’ll stick with the A400 Xcel Sporting. This is the model most often seen on the clays course. You can’t miss it, with its blue receiver.

The gas-operated A400 is available with either a 28- or 30-inch barrel. The MSRP is $1,699 and for an extra $100 you can get the hydraulic KO (Kick-Off) recoil reduction system. Some shooters like the KO, others do not. In all honestly, the A400 is such a light-shooting gun, you won’t need it. If you’re a hunter, the A400 Xtreme Plus is the best option for you, though you will likely be the only person shooting a camo gun on the clays course.

You can spend what it costs to by a new car on a pricey over/under shotgun. But for most of us, there’s honestly no reason to throw down more than $10,000 even if you are a dedicated shooter. That’s why I love the Zoli Z-Sport, which starts at $7,500. Available in 12-gauge with barrel lengths of 28, 30, 32 and 34 inches, this Italian-made shotgun is an ideal choice for shooters looking for an affordable high-end sporting clays shotgun.

The Z-Sport is available in a flat, mid-height and adjustable height rib models. All Zoli over/unders feature actions, trigger plates, and monoblocs built on forged steel, plus removable trigger groups. An optional BHB system allows you to fine tune the balance of the gun using incremental weights placed under the fore-end and in the grip. This is a gun that truly stands with the best of the best in terms of mechanical integrity and aesthetic appeal.