How to Shoot Better Rifle Groups (and Why Good Groups Matter)

Shooting quality groups isn't as easy as it seems, but it's critically important 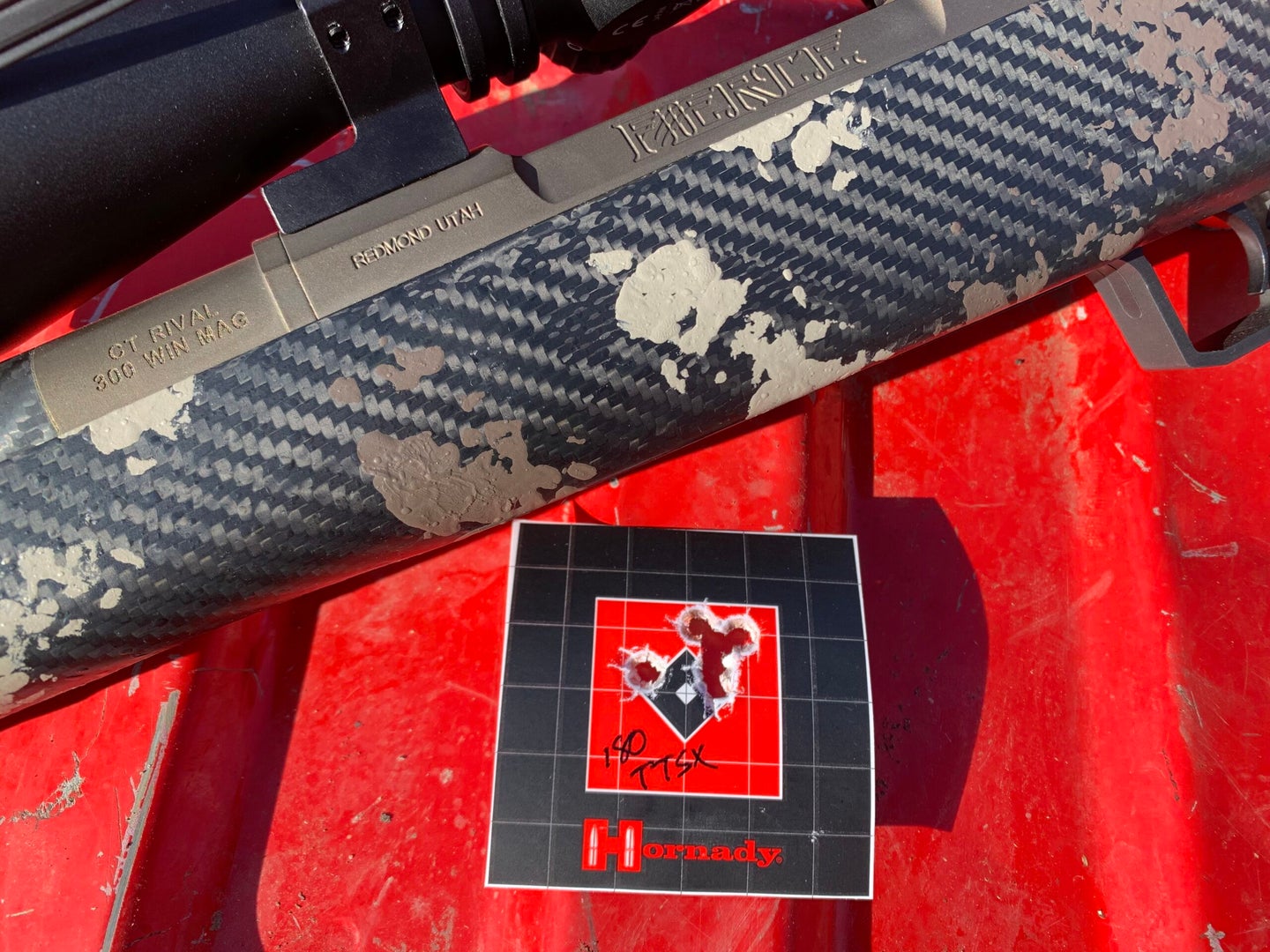 Shooting groups with your rifle is a fundamental process that is often underrated and done inadequately. Most hunters will shoot a few groups to get an idea of how accurate their rifle is and then call it good. Or maybe during their sight-in process they shoot a few extra groups just to make sure everything is dialed in. But shooting quality groups, and doing so consistently, is about much more than that. Shooting tight groups builds a foundation for knowing your rifle and shooting it confidently. Perfectly fired groups will also allow you to sight-in more precisely and that increased precision will be carried downrange to longer distances.

At the most basic level, shooting groups—ideally with zero human error—will tell us exactly how accurate a rifle is, and show us its average point of impact. Shooting a group is firing a succession of shots from the same position at the same target. Some shooters shoot 3-shot groups, however for most accuracy testing in Outdoor Life reviews, we mandate 5-shot groups.

At the recent Outdoor Life Gun test, our team fired nearly 400 measured groups from the field of new rifles, and I was reminded of just how challenging it can be to eliminate human error when shooting groups. It takes practice, repetition, and attention to detail. Reducing that error will help you in just about every aspect of shooting your rifle.

What Shooting Groups Can Tell You About Your Rifle

Shooting groups is the unequivocal standard when it comes to defining a rifle’s accuracy. How closely a rifle can print a string of shots together on paper is what we use to describe how accurate it is. You’ll hear rifles described as inch-guns or half-inch-guns, meaning they can consistently fire groups that measure that distance—or less—when measured across at the widest points and then subtracting the diameter of the bullet. Shooting groups can give you a realistic look at your rifle’s accuracy, help in selecting ammunition, and tell you how your rifle behaves when hot or fouled.

Perfectly fired groups with a given rifle and ammunition combination will vary somewhat, but over time they’ll even out. Just because a rifle has printed one or two half-inch groups doesn’t necessarily mean it’s a half-inch gun. You might have one or two screamer groups, and then eight or nine that are much more modest. An average of many groups will paint a better picture of what the true accuracy of that rifle is. For general purposes, an average of five or ten group sizes will give you a good idea.

Ammunition is a huge component of your rifle’s accuracy, and each barrel has its own tastes. Shooting groups over time with a variety of ammunition will help you select the most accurate loads. This is a critical component of load development if you want to get into handloading as well. Developing an accurate load is all but impossible if you can’t shoot quality groups. Confidence in your group-shooting will make you more efficient and you’ll know when flyers and errant shots are part of the rifle and ammunition’s accuracy, not your error.

Most hunters don’t need to dive deep when it comes to how their rifle holds point-of-impact when the barrel gets heated up, or whether it shoots better when left fouled, but it can be helpful. With a precision rifle, shooting extended strings of shots can tell you a great deal about how your rifle maintains accuracy, or if things start going haywire when it gets hot or excessively fouled.

Shooting groups with a fully supported rifle off a bench or prone ought to be easy, right? Not so much. Naturally, shooting from a relaxed, supported position is easier than field positions, but truly eliminating the human element of shooting groups—or even dramatically reducing it—isn’t nearly as simple as it sounds.

With most hunting rifles, breaking shots with enough consistency to maintain regular sub-inch, 5-shot groups is very challenging for the average shooter—even off sandbags. It becomes more difficult with lighter weight rifles, poor triggers, or less-than-ideal positions or optics. Any improper physical input to the gun or instability in the position will show up as inconsistency on paper over time.

Shooting groups with consistency takes practice and great attention to shooting fundamentals. Many hunters who can’t find a load that shoots well or are disappointed in their rifle’s accuracy simply have some flaws in their technique (this that’s certainly happened to me). The difference between scorching accuracy and lukewarm mediocrity is often overshadowed by the slop of human error. This can be incredibly frustrating and can lead to a lack of confidence in the rifle and wasted time chasing different loads around trying to find the best one.

Easy Ways to Get Better at Shooting Groups

We can’t ever truly eliminate human error and input completely, but we can reduce it. Most of us don’t need to be competition benchrest shooters either—we just need a few tools to help us improve. Here’s how to start shooting better groups.

All the fundamental factors for accurate shooting matter when shooting groups. Things like breathing, position, and trigger control are critical. Many of these factors can be slightly compromised if we aren’t careful, so do some dry firing before each group. This can tell you a lot about your position and trigger pull.

When you’re getting ready to shoot, build your position and get a solid natural point-of-aim. That means that when your position is built and your rifle is supported, it should be pointed right at the target, and you should be totally relaxed. If you’re having to put pressure on the gun to keep the crosshairs on target, you need to adjust your position. Once the position is rock-steady, then dry fire at the target.

Pay attention to your crosshairs. If your crosshairs make a “jump” when you pull the trigger, you are putting pressure on the gun in a way that makes it move when the trigger breaks. It could be as simple as some strain in your neck or too tight of a squeeze in your grip. Work on your shot and position until the crosshairs don’t move when you dry fire.

Load Your Bags or Bipod

Even with sandbags supporting the front and rear of your rifle on a bench, it can still be difficult to keep your rifle stable. When the rifle is just sitting atop sandbags or bipod, it is still very susceptible to input and movement. Try setting your rifle up on the bench with front and rear supports so that the crosshairs rest on the target. Look through the scope and watch the movement as you pull the trigger without touching any other part of the rifle.

You may have heard the term “loading the bipod,” which means to lean into the buttstock of the rifle to put pressure on the bipod and create a firm connection between you, the rifle, and the resting surface. That consistent pressure locks things into place and reduces other inputs on the rifle. You can also do it with sandbags.

Loading your bipod on a bench isn’t usually straightforward, and many shooters find sandbags to be a more stable rest on a bench because their weight allows you to apply more pressure than when using a bipod that might slide. If you can find a way to create a surface to load against, it will help tremendously. At my local range, I simply clamp a small board to the front of the bench and use that to load my bipod and sandbag rest into for maximum stability. On the ground, some bipods utilize large, spiked feet that dig into the ground.

Even slight changes in your position from shot-to-shot will introduce small errors that can really increase your average group size over time. Slight differences in position and pressure on the gun can easily cause perceived point-of-impact shifts of a quarter or half-inch, and if you introduce that error repeatedly, you might have a hard time shooting under an inch with a rifle that is perfectly capable of doing so.

Use the Right Sized Target

Although high-magnification optics certainly do aid in shooting the best rifle groups, you can still shoot great groups with lower-powered optics. Many hunters use scopes that top out at 6x or 9x magnification, and that’s totally fine. Your hold or the movement in your crosshairs doesn’t necessarily change between lower and higher magnification, but it can be more difficult to aim precisely at a tiny spot with a lower-power scope or thicker reticle.

Each shooter will develop a preference for the types of targets they like to shoot at, but if you are using a lower-power optic, pick a target that has a larger aiming point. You want something that you can easily see both the reticle and aiming point and maintain consistency. If you have a thick reticle, holding over a half or one-inch dot at 100 yards can result in more inconsistency than aiming at a larger target. For low-magnification scopes, I like targets that feature a black square with a white center—just large enough for me to perfectly center the reticle and see a touch of white on all sides.

Shooting groups is fun when everything is going well, but what if your rifle isn’t shooting as accurately as you want or expected? Sometimes you might have a rifle printing large, erratic groups that leave you dumbfounded—and can ultimately eat at your confidence. Poor groups might have you second-guessing your shooting.

It can help to bring a rifle to the range that you know shoots lights-out to check yourself when another rifle isn’t performing so hot. If your new rifle isn’t shooting well, check the normal stuff like scope rings and action screws, but put the rifle down for a bit and shoot a couple groups with your control rifle. If you’re immediately shooting smoker groups when you switch rifles, you know it’s something to do with that rifle or load, not you as the shooter. If you’re still shooting uncharacteristically bad groups, it’s time to revisit your position and fundamentals.

During our 2022 Gun test, I found a couple of rifles that just weren’t shooting like I thought they should—no matter what ammo I tried. Our accuracy testing was a grind, so it was natural to question if it was me or the gun. Jumping on a rifle like the Accuracy International AT-X or Seekins Havak HIT was the confidence boost I needed to show that it wasn’t just my shooting.