These war-time firearms and weapons were not well thought out. Some are downright ridiculous 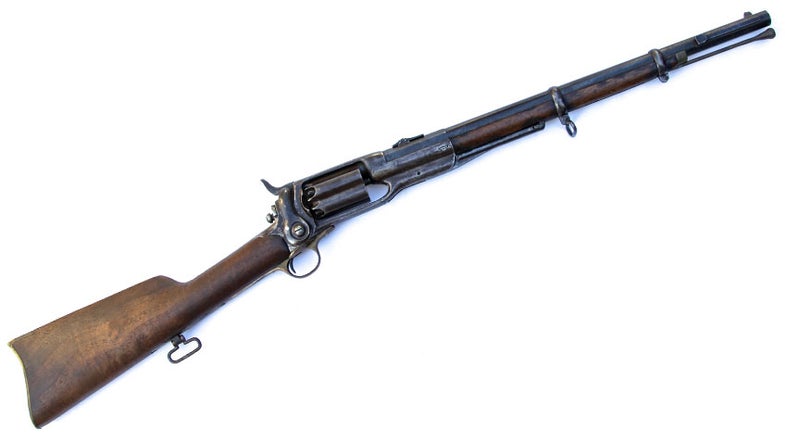 The Colt revolving rifles were some of the worst military rifles in history. NRA Museum
SHARE

If you Google the worst military guns in history, all the usual suspects will appear: the French Chauchat Machine Gun (WWI), the U.S. Liberator Pistol (WWII), the Japanese Nambu (WWII), the British Sten Gun (WWII), literally any turret gun (1800s), Colt’s Revolving Rifles (1800s), and the Ross Rifle (WWI). Each of these guns was a failure, but there were other weapons dating back as far as the 1500s that proved just as ill-conceived. Here is a closer look at the biggest war-time weapon blunders you’ve likely never heard of before.

For this example, I am going medieval. By construction alone, it’s obvious why the flail was a horrible idea for warfare. The general concept is a handle attached to a chain attached to a striking device. If you think about it, however, you probably have more of a chance of knocking yourself out than accomplishing anything productive on the battlefield with this weapon. Due to the questionable provenance and dating on artifacts, people have argued that these weapons either were never made or simply not common due to their obvious issues. Regardless, next time you’re LARPing (Live Action Role Playing), make sure you wear a helmet with some protective padding if you’re wielding a flail.

The concept behind the bayonet was revolutionary in terms of military tactics. When firearms initially appeared on the battlefield, infantrymen were accompanied by pikemen, soldiers wielding long sticks with an edged weapon on the end. Since firearms were slow to load, it provided backup when infantry lines closed in. The bayonet, which was invented in the 1600s, ultimately replaced the role of pikemen with musketeers who now had a two-in-one weapon. But the earliest iterations were known as plug bayonets, in which the edged weapons were placed in the muzzles of guns. This was not the greatest idea, since it didn’t allow the shooter to fire the rifle. It literally became the handle of a pike. This early bayonet was quickly phased out by a socket-style bayonet that fit around the muzzle of the gun, allowing for dual use in a time of need.

Combination weapons were extremely popular, especially in the early stages of firearms technology. But the idea that combining two weapons creates a better one is not always true. Axe pistols were developed and used by the Polish and in the Swedish cavalry in the 1700s. They saw a much greater adoption than other combination blade guns, but the balance of this gun could not have been very good. I’ve handled several of these, and have noticed that where the axe head sits (at the rear of the breech or off the muzzle) can impact the shooter’s ability to aim and fire with any amount of accuracy. The result of any sword-gun or axe pistol is a heavier-than-necessary gun with a stock shape that’s awkward for traditional sword or battle axe wielding.

The Colt Walker (1847) is iconic in American history due to its wide use in Texas. But the revolver was not without its flaws. The revolver’s sheer size alone made it clunky to operate, and the gun suffered from some of the same problems as other early Colts, including chain firing and cylinder issues. Also, if you have ever fired one—and it was likely a reproduction—the lack of a loading lever latch causes the lever to fall into an empty chamber after firing, forcing you to move it out of the way to continue firing, throwing a near-literal monkey wrench into the whole repeating firearm concept.

This Italian submachine gun, chambered in 9mm Glisenti, is such an odd design. It has two barrels operating as machine guns with a butterfly grip and two thumb triggers. Initially intended for shooting down aircraft, the gun’s chambering did not have enough stopping power to be effective in that capacity. Furthermore, the firearm was equipped with only 25-round magazines, rendering the firing rate—about 1,500 rounds per minute—moot. The military tried finding better applications for the gun, including adding a shield and using it for infantry fighting. (There is also a photo of one mounted to a bicycle.) But by the end of World War I, the Italians cut their losses by cutting the gun in half, adding stocks, and turning it into a more standard firearm.

Like the bayonet plug, this firearm also suffered from an attachment issue. The STG-44, often cited as the first true “assault rifle,” was a fantastic piece of technology, so great that it inspired a whole new category of firearms development around the world. The Krummlauf—a curved barrel attachment—was not as revolutionary. The concept here was simple: Create a bent barrel with accompanying scope in order to be able to shoot from a safe position around a corner. Except that’s not how physics works. The curved pathway of the bullet as it rotates through the barrel caused a series of unexpected issues, including short life spans for the barrels. Bullets would also fragment before leaving the muzzle of the gun.

Read Next: 13 of the Biggest Gun Fails in Recent Firearm History

The English are no strangers to bullpup rifles. It is interesting to note, though, that “bullpup” is not a term used by the British. The Brits typically refer to them as stockless rifles, in which the action is behind the trigger and functions essentially as the stock. Immediately following World War II, development began on what is known as the EM-1 and EM-2 rifles. Those designs although not used widely—in fact, they were adopted and quickly unadopted in their own dramatic story—were far superior to the L85A1, which was adopted in 1985. England should have quit while they were ahead or at least used some of the features form the EM-1 and EM-2 when making the L85A1. After Desert Storm and the firearm’s abysmal performance, a report was issued by the Ministry of Defense (and leaked to the public) essentially calling the gun terrible. After denying the issues for a while, the MOD did have H&K make changes—literally the entire design of the gun—to the tune of £92 million.

Some of these weapons did ultimately become successful, such as the bayonet. And while others—like H&K’s version of the L85—became far superior, it may have been too late to change public opinion. It’s the trial and error of these technologies that help inform our militaries today, and keep them on the cutting-edge of weaponry. Some lead by example; others are a cautionary tale.