Here are ten rounds you can trust when it really counts 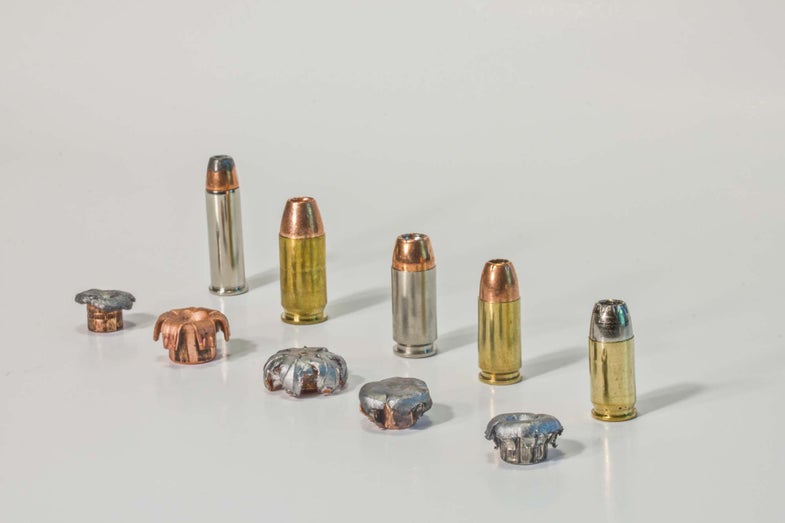 After years of testing hundreds of defensive handgun loads, it became clear the only reliable way to classify their performance was to divide them into two categories; below average and better than average.

This was first reported in my 2013 book, Handgun Training for Personal Protection, where average performance was established at 13.7 inches of penetration with expansion of at least 0.58 inch. Loads exceeding that benchmark are by definition, better than average. Here are ten you can trust.

This load will exit the barrel of a four-inch revolver at more than 1,400 fps. That means it generates more than 500 foot-pounds of energy. That’s enough to drive this excellent Gold Dot bullet to 16.5 inches, while allowing it to expand to 0.65-inch in diameter. That’s magnum performance without magnum recoil. This load recoils 14 percent less than the .357 Magnum load listed at number 4 and the fireball is just as impressive.

Of all the .380 Auto loads tested only one has achieved better than average performance. This load just barely exceeded the standard when fired from the sub-compact handguns the .380 is so commonly found in. Keep in mind, velocity variances in itty-bitty guns can alter terminal performance. While it might be a best option for the .380, by all other yardsticks, this load is borderline.

The .38 Special cartridge is an antique by any measurement. Just the same, much of the ammunition for it as just as old-fashioned in how it performs. However, Speer’s 135-grain Gold Dot has brought the .38 Special into the new millennium. Even out of snub nose revolvers you can expect around 14.5 inches of penetration with the bullet opening up with a frontal diameter measuring about 0.59-inch across.

Though not as popular for personal protection as it was before the auto-pistol craze in the 1980s, the .357 Magnum is still one of the most effective defensive handgun cartridges ever devised. Recoil is stiff with heavy bullet loads but this 125-grain offering from Sig Sauer won’t break your wrist. In 10-percent ordnance gelatin the bullet will penetrate to around 16 inches and it just exceeds the minimum expansion threshold of 0.58-inch.

Bullet engineers have learned how to extract the highest level of terminal performance from the high muzzle and rotational velocities the 9mm Luger can deliver. Once considered less than ideal for personal protection, technology has helped the 9mm become one of the most popular defensive handgun cartridges of all time. This standard velocity Sig Sauer load exceeds the better than average standard of 13.7 inches of penetration with the expanding bullet measuring 0.59 inches across its front.

At +P velocities the 9mm Luger becomes a different animal. Modern bullet technology has adapted to this speed and this load from Remington is in a class by itself. With only a modest increase in recoil over standard pressure loads, the better-than-average benchmark is exceeded by almost 10 percent in both categories. The Golden Saber’s unique construction also makes this load almost barrier blind, meaning it will perform very well even after passing through things like wallboard or heavy clothing.

The Hydra-Shok bullet from Federal is legendary. For years it was the favorite of law enforcement agencies and is still in service with many departments. It performs very well in the 9mm luger and .45 Auto. And, with the 15.0 inches of penetration and 0.58-inch expansion you can expect from the 165-grain .40 S&W Hydra-Shock, it is emblematic of this bullet’s terminal performance, in the 9mm Luger and 45 Auto.

The TAC-XP bullets from Barnes are offered in defensive handgun cartridges from a wide array of manufacturers. This 165-grain load from Doubletap Ammunition is unique in that it is a moderately recoiling, non +P offering, capable of penetrating more than 16 inches in 10-percent ordnance gelatin, while still expanding with a frontal diameter of 0.63-inch or more. It is called the “Mann” load because Mike McNett at Doubletap created it at my request.

The 230-grain load for the .45 Auto might be the most iconic but it cannot compare to the faster 200-grain offerings. This HST load is ideally adapted to personal protection because it delivers consistent better than average penetration, and expands to a fantastically wide 0.83-inch. Due to the construction of the HST bullet, this performance can be relied upon even after the bullet has passed through most common barriers.