How to Get In on the False Albacore Run This Fall 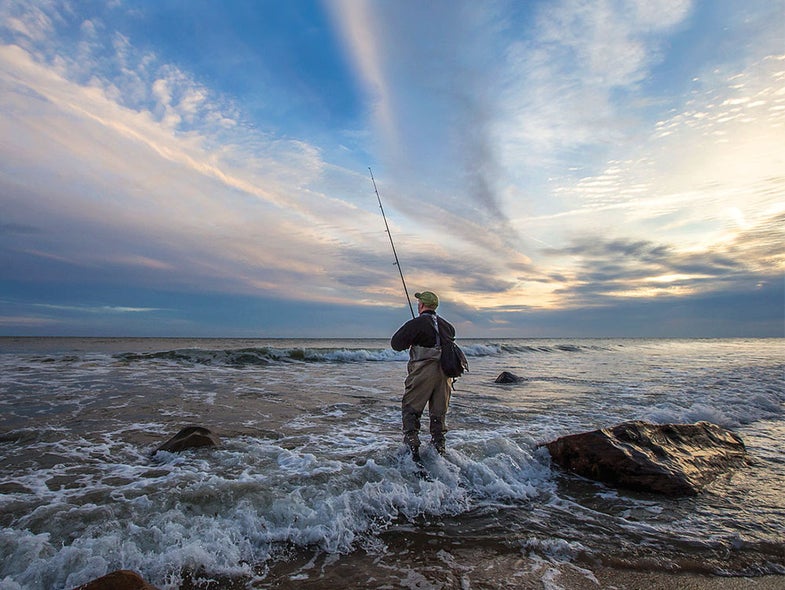 Anglers from Cape Lookout to Cape Cod are about to lose their collective mind. That’s because the mercurial false albacore—the scale-model tuna that’s bonefish-fast—is set to hit the surf. From September through November, albies will be blasting shoals of silversides and sand eels within casting distance of the shoreline, and otherwise stoic surfmen will resemble a mob in Times Square chasing 100-dollar bills.

The false albacore’s stratospheric rise from obscure bycatch to target species has spawned a litany of do’s and don’ts espoused by albie sharpies. Some are obviously true—such as don’t try to slow one down on its blistering first run. But there are enough false albacore untruths out there that some myth-busting is in order.

I’ve heard it all: “Worst fish I’ve ever tasted.” “Even my cat wouldn’t eat it.” “Stunk up the whole house.” But the truth is, these fish are downright tasty when they’re grilled—if, and only if, you bleed, gut, and ice them almost immediately after beaching them. At home, fillet the fish, slice it into chunks, and marinate it for 1 to 2 hours in a mixture of olive oil, soy sauce, white wine, garlic, mustard seed, and ginger. Char it, but leave the middle pink.

Myth 2: You Need to Burn Baits

While you might think that a fish capable of swimming at 40 knots would like its food to move equally fast, it’s simply not true. Watch albacore tear through bait and you’ll frequently see them whirl around and pick off the stunned or wounded fish that are left behind. Slow down your retrieve. Twitch your metal, bucktail, or soft-plastic like it’s an easy meal, and you will be rewarded.

Myth 3: You Need a Flourocarbon Leader

Yeah, yeah, yeah, fluorocarbon is invisible in water and all that, and little tunny do have great eyesight. But I’ve seen so many albies caught on heavy mono shock leaders that I just don’t think it really matters.

Deadliest Cast: 3 Most Dangerous Places to Fish in the U.S.

Myth 4: You Need to Use Flies

Why should the fly guys have all the fun? Spin fishermen should try using a hookless popper with a 3- to 4-foot dropper rigged with a popular albacore fly like a Surf Candy or Albie Whore. Pop it in slowly (see Myth 2 ). False albacore will wallop it like a giant tuna hitting a daisy chain of mackerel.

Myth 5: You Must Wait for the Fish to Show

Some albacore anglers stand in the surf for hours and never make a cast. They stare steely-eyed at the ocean, waiting and hoping for it to erupt with a frenzied blitz that may never come. But that’s certainly not the only way to tie into fish. Try blind-­casting and fishing the water—rips, drop-offs, or points—rather than waiting for the easy money. And who knows? Maybe you’ll luck into a bluefish, striper, or bonito along the way.