How to Rig a Paiute Deadfall Trap, Step by Step 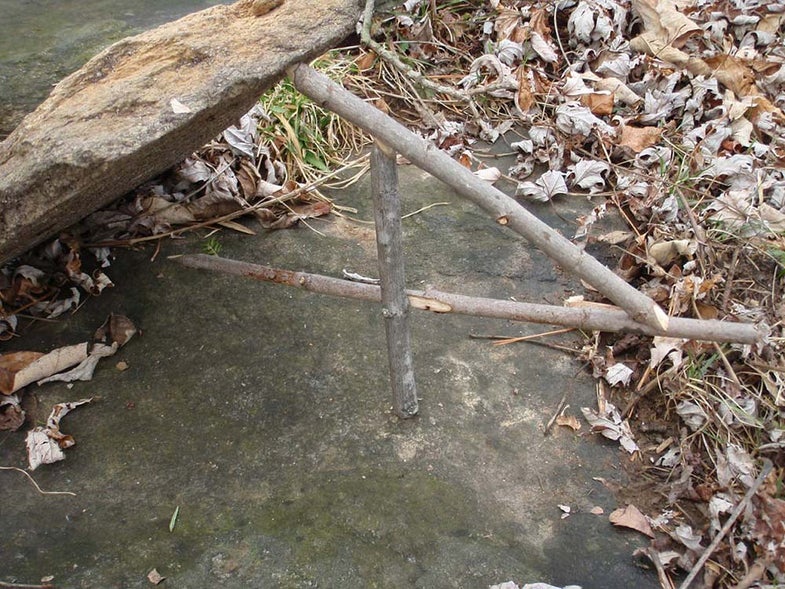 The more traps you build, the more you put the odds of success in your favor. Tim MacWelch
SHARE

The best way to explain the concept of an animal trap is that each one is a little mechanical hunter. These automatons sit out on the landscape, rain or shine, day and night, poised to acquire calories for you. And while there are plenty of traps to choose from, few of them show up in my bag of tricks as often as the Paiute deadfall. This clever trap dates back hundreds (if not thousands) of years to the early Paiute Indian nations. Today, the government recognizes three closely related Paiute groups: the Northern Paiute, the Owens Valley Paiute, and the Southern Paiute. The ancestors of all three groups inhabited the land that’s now present-day Nevada. Anyone familiar with the rugged terrain of the Paiute homeland knows there’s an abundance of rocks, and often, a scarcity of other resources. In this dry land where the hungry can’t afford to be picky, we find the necessity and the materials for the world’s greatest rodent trap. What follows are some of the details you can use to pull this trap off the page and put it to work for you in a survival situation. 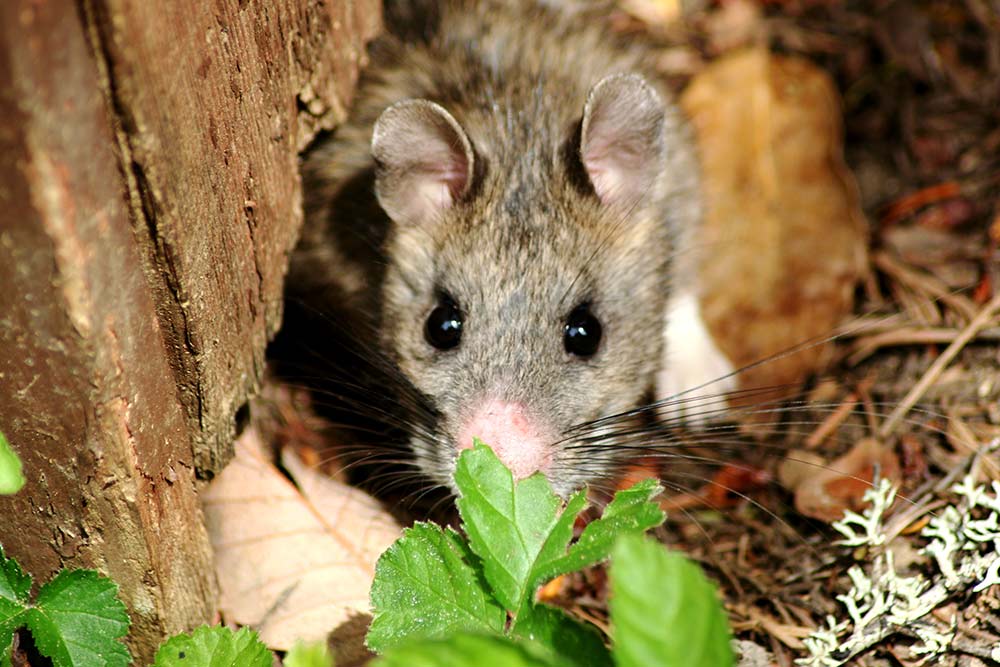 Trapping isn’t like throwing out a net and seeing what you can catch. To be successful, you have to know the habits of your prey, and be willing to put in a lot of time and work.

Hunting and trapping have a lot in common. They both consist of broad skill sets that allow you to collect animals for food or fur. And in both cases, you’ll have the best luck when you focus on a single species. You can increase your odds with trapping once you decide which animal you’re after. How will you know which trap or bait to use if you don’t pick a target species? How will you know the right place to trap if you don’t learn about the behavior of your quarry? Pick one locally abundant species and learn about its habits. This will give you a great start for your trap line.

It’s also important to note that some animals are legal to trap in any fashion (within their season), while others may have a limited range of harvesting methods in certain areas. And sometimes, those rules go out the window when you truly need food in a survival situation and you’d use any means necessary to get it. 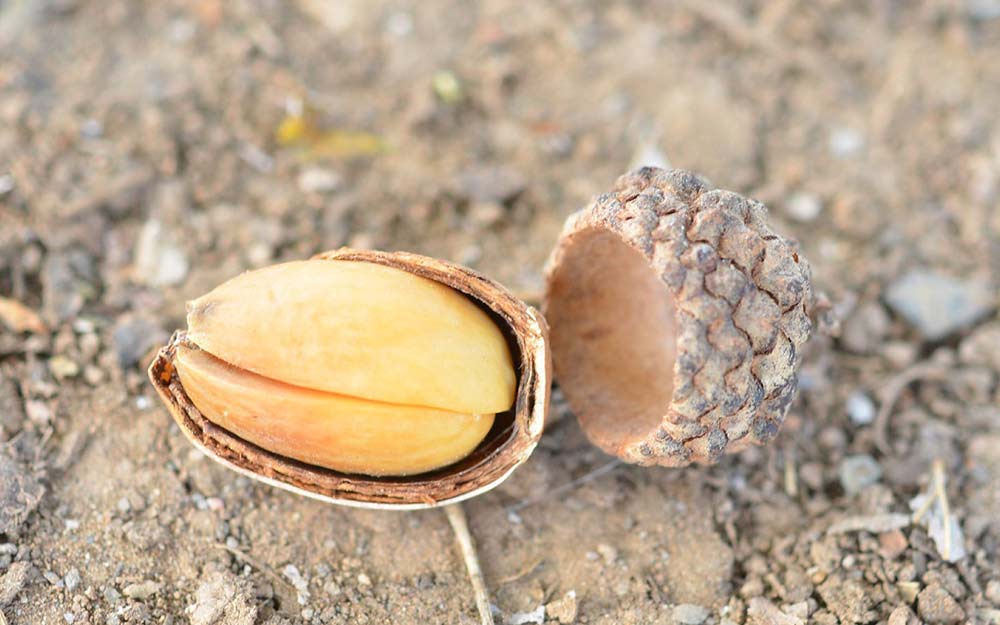 Try to bait your sites with food items that aren’t readily available where you’re trying to trap.

Once you have decided on a target species, you’ll need to make another key decision: choosing the right bait to catch that critter. And even though peanut butter will work fine on a mouse trap at home, you’re probably not after house mice in a survival situation. You often need very specific baits to lure specific animals for food, fur, or predator reduction. That’s why the art of baiting traps is such an important part of the overall art of trapping, and that’s why you can’t expect much more than an empty belly from randomly throwing out traps with generic bait.

Baits For Herbivores
There are some great baits for plant-eating animals that can be harvested in the wild, or picked up at the local market. When I’m after groundhogs, I have the best results when bating with very sweet apples. I cut them into pieces to release their fragrance. You can skewer an apple slice on a trigger component, or smash slices into a paste to dribble on the ground underneath the trigger stick. In the field, nut eaters have a hard time resisting sweet pecans and hickories (unless they are locally abundant). I’ll crush the hickories into a paste to wipe on the trap’s trigger mechanism or underneath a deadfall rock.

Bait For Omnivores
Omnivores will eat anything, which can make trapping easier if they like your offering, or harder since they have plenty of other forage to consume if they don’t. For raccoons, I use canned tuna. The fouler and cheaper the tuna is, the better it seems to work. I’ll often trap for coons alongside creeks and streams, and pour the tuna juice into the creek in hopes that they’ll follow the creek up to get their fishy treat. In a survival situation, pieces of offal or tiny baitfish might be helpful instead

Bait For Carnivores
Meat eaters do have their preferences, and the bait also has to be something enticing to the animal. Coyotes love beaver meat. Foxes love rotten, hardboiled eggs. Mink, ermine, and fishers love fish. Bobcats love fresh organ meat like liver, lung, and other guts. 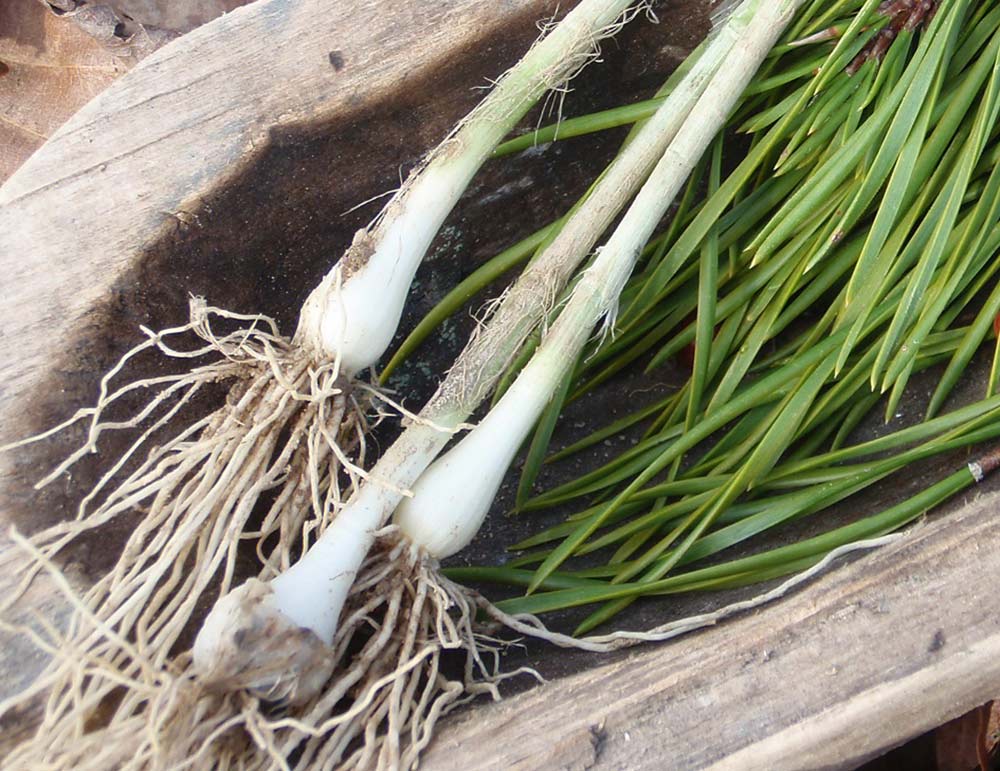 Small prey is no different than big game, and if you hope to trap even the smallest critter, scent control is a must.

Your scent may not be noticeable to you, but it’s likely to scare off your prey. Thankfully, there are ways that you can minimize your human scent, using materials you’ll find in nature. For the first step, scrub your hands in a local water source, using sand or mud instead of soap. This removes some of the dead skin flakes and skin oils, and provides the smell of the waterway. Next, scrub wild onion or pine needles (or some other pungent, non-toxic local plant) all over your hands. Finally, wipe on a layer of dirt to mask your scent one more time. Be sure to de-scent your hands this way before you start building trap components, before handling traps or trap parts, and do it again before setting any traps. 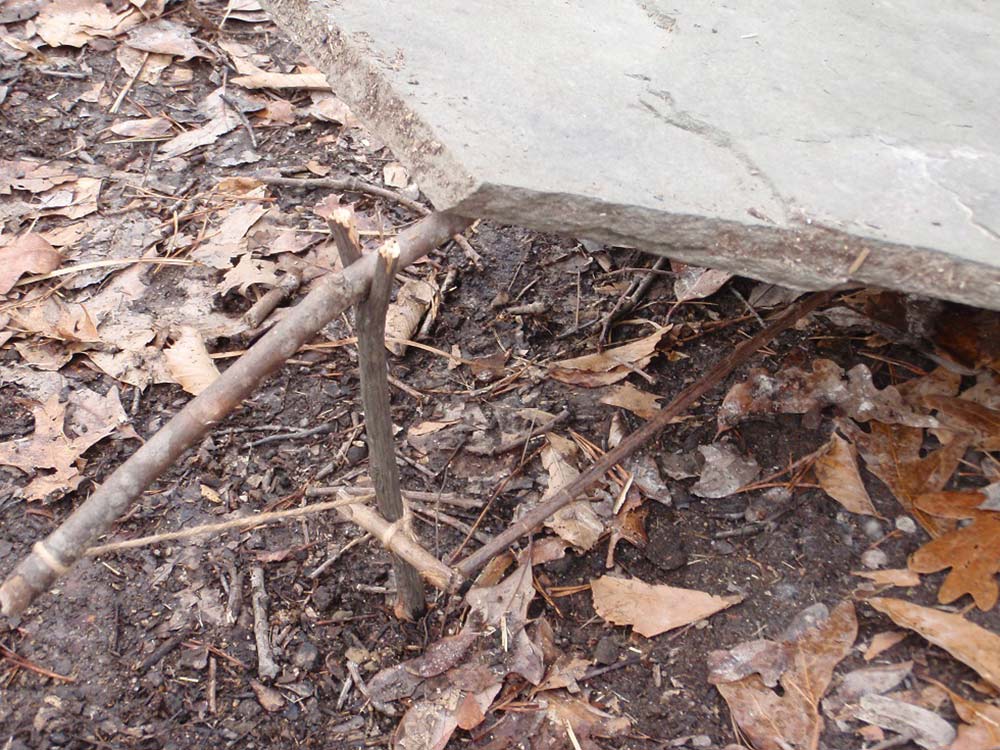 Rigged correctly, a deadfall trap can dispatch any sort of small animal in a survival situation.

Flipping through survival books, we often see sketches of deadfall traps employing a log as the crushing implement. This will work, but is a log the best approach? Not really. The actual “kill” surface underneath a log is only a narrow strip. If the animal is situated to the right or the left by even a short distance, they’ll receive a glancing blow or no blow at all. Taking a tip from the Paiute deadfall, I favor flat rocks for all of my deadfall weights. These should be an estimated five times the body weight of your intended quarry, and set up on a flat hard surface. Another flat rock would be the ideal base, but hard packed ground will work too. Avoid setting this trap (or any deadfall) over a soft substrate. Loose sand or muddy ground will cushion the impact of the weight, negating the effectiveness of this trap. And if your flat rocks are thin yet abundant, you can stack them to get the desired weight.

Use your largest flat rock first to actually set up the trigger. Then gently stack additional flat rocks on top until you have reached your target weight. Don’t bother collecting big flat rocks and carrying them around to set these traps. Just make your triggers in camp, then set up your deadfalls as you find flat rocks along your “trap line” (a route that connects multiple traps for daily monitoring). For most of us, this exact trap should be for survival purposes only, as deadfalls of any kind are not legal in most states. But if you are crafty, you can substitute a box for the flat rock and turn this into a live catch box trap. 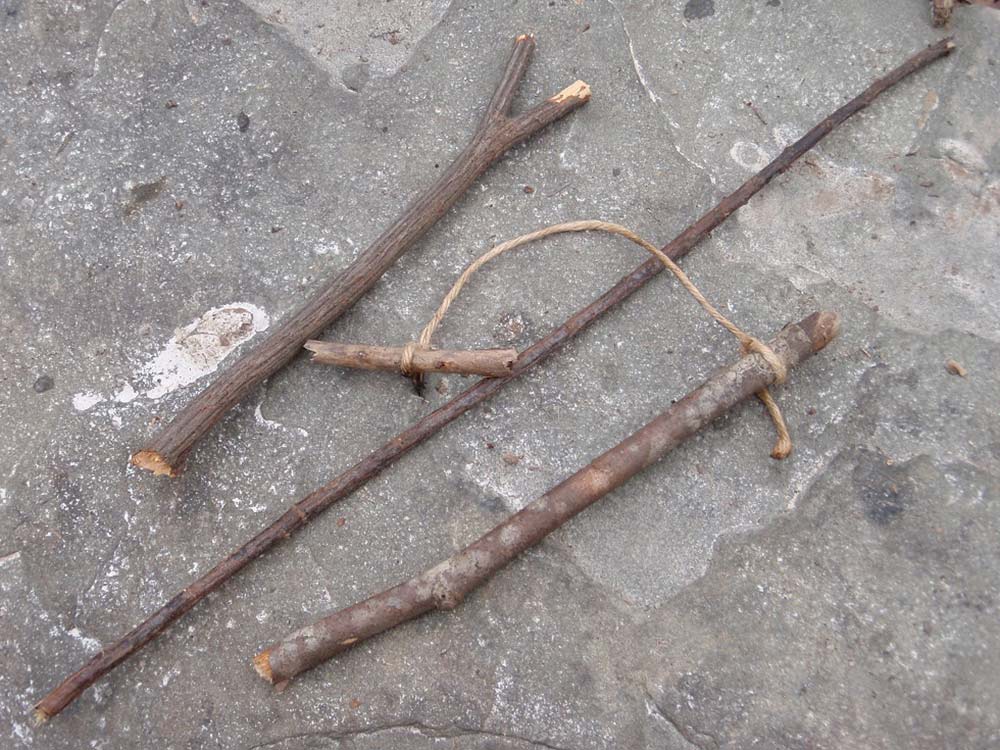 To build the trap, you’ll need string, bait, and four sticks of various lengths that are strong enough to hold up a 5- to 10-pound rock with a flat underside.

Once you figure out your local trapping target and strategies, you can neutralize the human scent on your hands, break the trigger sticks into shape, and gather the other needed supplies. The Paiute deadfall is a stronger and more sensitive trigger than many others types, and it can be fashioned without a knife. To make this trap, just break a few sticks into the right size and shape with your bare hands, and scrounge up a few inches of string. That’s all you need, plus the aforementioned rock(s). For an average sized rat, prairie dog, or rodent you’ll need: 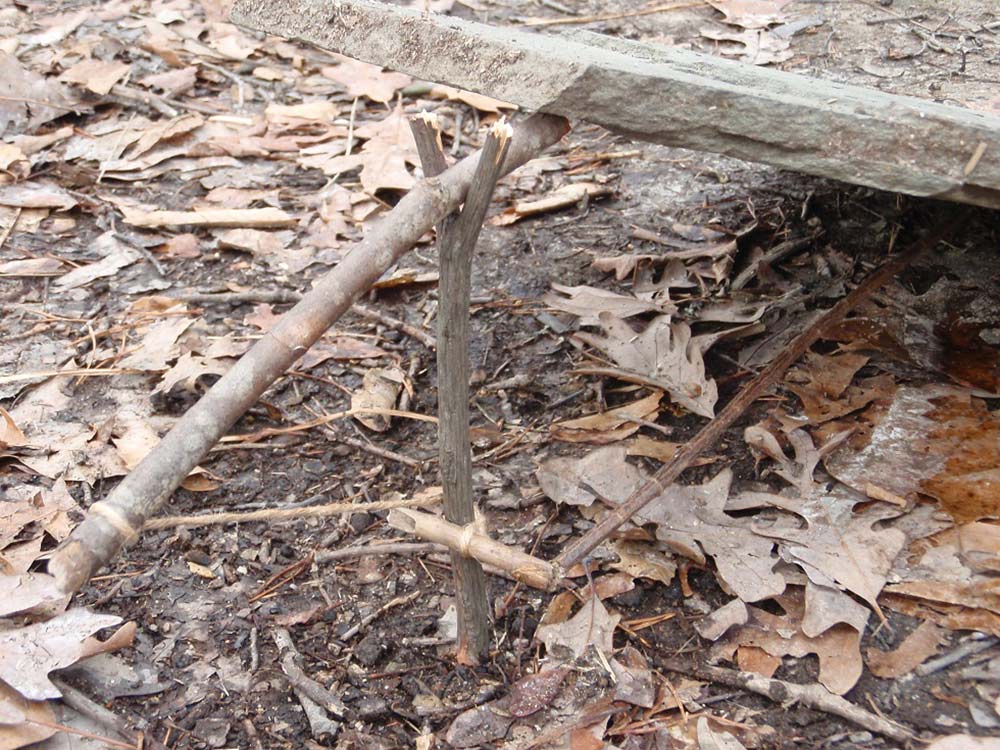 If you build the trap correctly, the rock will remain supported by the sticks after you let them go.

Next, you’ll wrap the toggle halfway around the post. It’s basically a 180-degree turn. Now you should be able to hold up the rock by just holding the toggle. The final step is to place the baited end of the bait stick between a rough spot under the stone and the tip of the toggle. It’s good to scope out this crack or crevice before setting up the trap. When you can let go of the trigger stick, and the rock stays up in the air, you did it right. 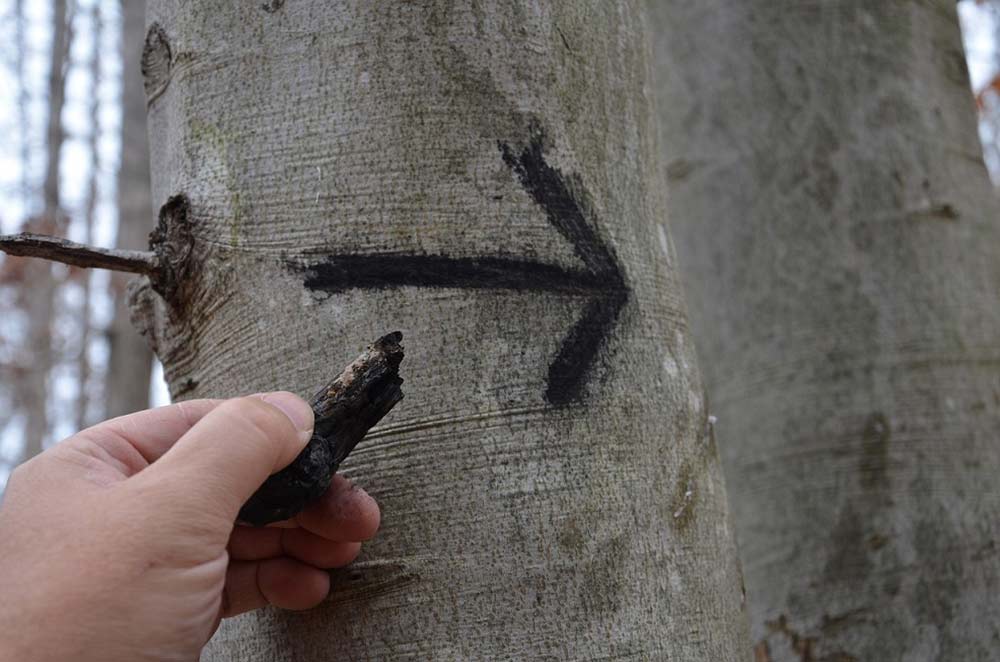 Set up a series of traps in line where an animal might be traveling, but be sure to leave a mark or sign nearby to warn others, and so you know where to find your traps later.

Once you are ready to set out your traps, it’s time to create a trap line. This is typically arranged as a circuit that you can walk to visit traps and to collect game. In a forested area, you could mark trees to establish your path. In swampy or grassy areas, you could set up little flags on stakes. Depending on the animals you are trapping, this line may run down a creek, up a ravine, along a cliff, or beside some other natural feature which funnels the animals into a smaller or constricted area. You could also set up along a swamp, deep in the brush, in the middle of a field, or anywhere else that has plenty of animal sign. For practice, this could be on private land, or on public lands that allow trapping. Of course you want your traps to be successful, but you should also be worried about the safety of your traps. Set them up in a place (or mark them in such a way) that people and pets do not become injured by them. 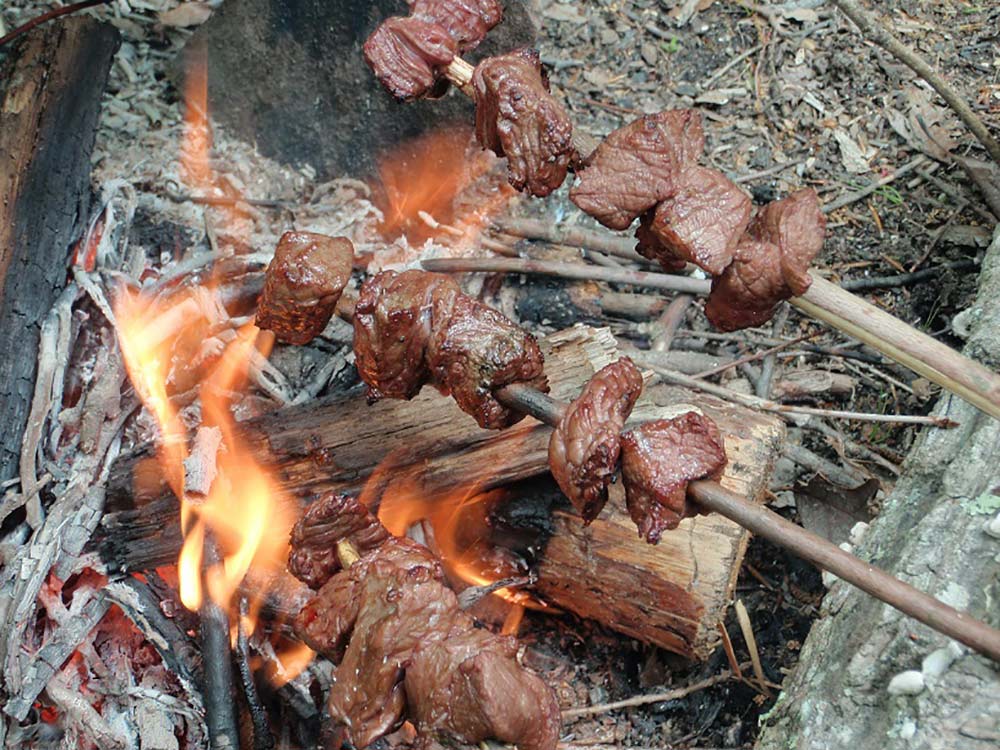 Wake Up To Reality

The are no guarantees with traps. Some days you’ll be successful, and others you won’t fool a single animals. The key is to be realistic.

Just because you’re hungry, animals aren’t going to impale themselves on pointy sticks and prop themselves by the fire to slow roast. The act of getting meat during a survival scenario isn’t that easy. No animal wants to be your dinner. And they are going to use every trick they possess to avoid dying, just as you would. But it’s not impossible either. Just set your sights lower than that haunch of red meat you imagine hanging over your campfire. In a real survival event, you’re more likely to be dining on rodents and less desirable fare. Of course, you may get lucky, and then you will truly understand the feast and famine cycle that our ancestors once lived by. Some days, there is excess food, but most days, there isn’t enough. This is the reality of the hunter/gatherer lifestyle and it’s helpful to maintain expectations that match your skills, supplies, and situation. 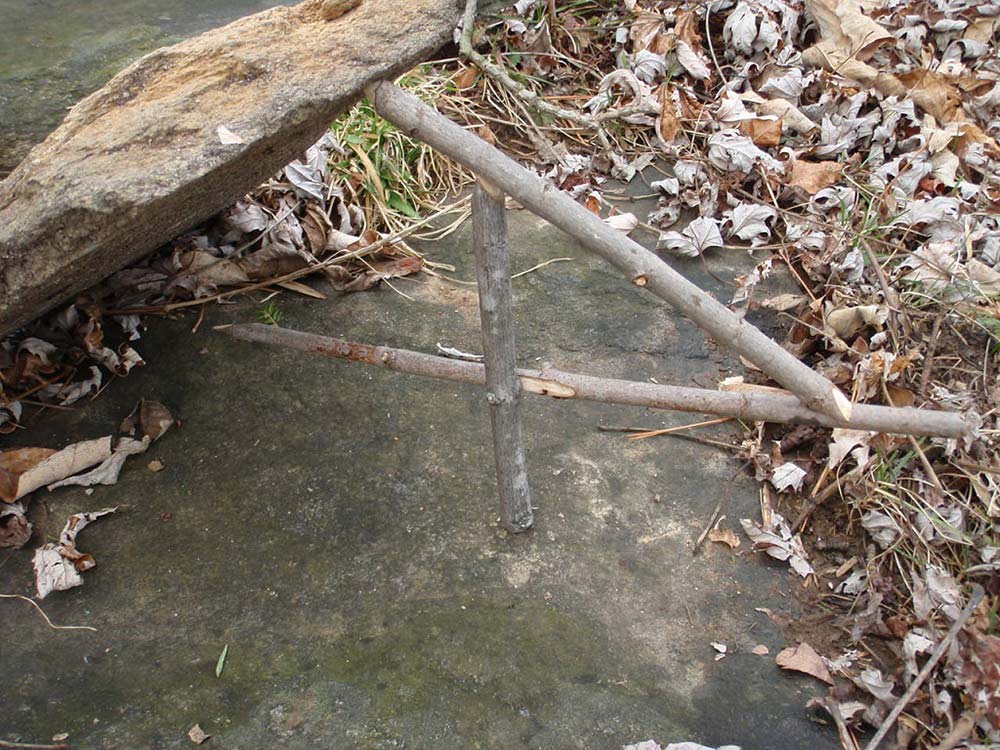 The more traps you build, the more you put the odds of success in your favor.

The best way to have success in trapping is to set out a multitude of traps. It’s said that most professional trappers have less than a 10 percent success rate…on a good day. That means they have to set out ten traps to capture just one critter, or scores to trap several. Never forget that. 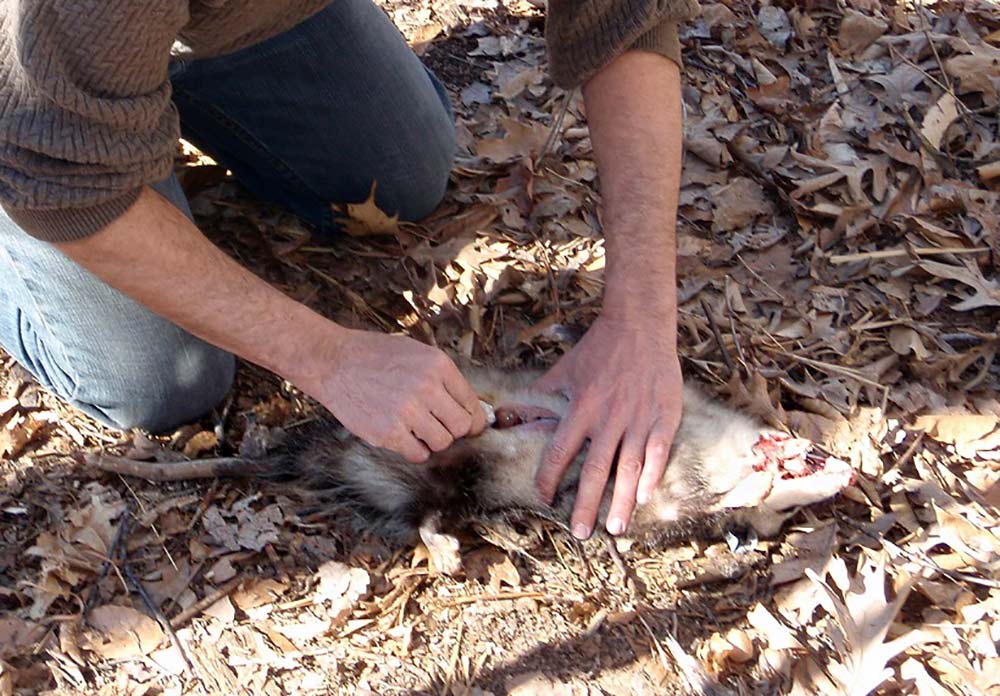 Unless you’re in a true survival situation, check the regulations and seasons in your area before setting a trap.

If you’ve never trapped before, or haven’t had much luck, here are some main takeaways to consider.