10 Primitive Survival Skills that Will Keep You Alive 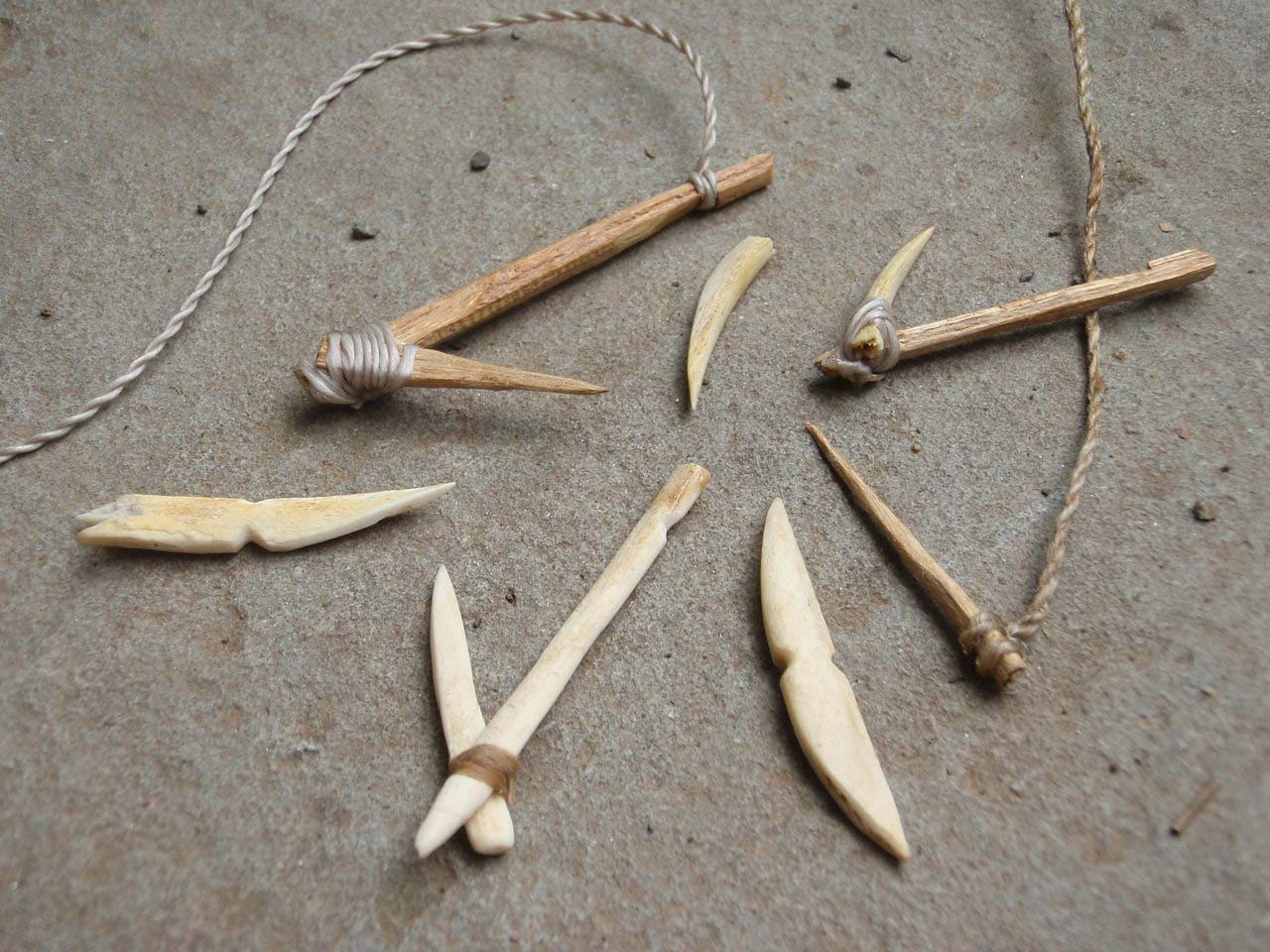 There are ways to lure fish from their watery home without a nightcrawler. Tim MacWelch
SHARE

Modern survival gear can make any emergency easier to navigate, but what happens when you get caught in a perilous situation without it? Just because primitive survival skills are ancient, doesn’t mean they aren’t still effective. These 10 stone-age survival skills are well worth knowing, especially in a time when we rely on electronics (and battery power) to keep us alive.

Fire by friction is one of our most ancient techniques for creating a fire from the natural environment. Most methods involve a drill being spun back-and-forth on a board (reciprocation is the key to most friction methods). It can also be done with a sawing motion (again, going back-and-forth). Whichever technique you choose, there are several constants to keep in mind. Material selection is key. You’ll want softer wood species for the friction components of most friction fire sets. This wood should be dead and dry (if you plan to use the kit today), but it shouldn’t be rotten. Bark falling off and fungi sprouting from the wood are both typical signs that the wood is too far gone for friction fire components like drills and boards. You’ll also want to focus on species with low ignition temperatures and low levels of pitch (this is an oil-based sap that acts as a lubricant once heated, ruining the friction). Finally, you’ll have to construct the kit correctly and learn the skill of using it. There are a lot of things that can go wrong in this complex art form—but when everything goes right, you get fire.

You’ve spent hours working on your knot tying skills, but all that practice will go to waste without the string, cord and rope to tie those knots. This is where cordage production comes into the game as an unsung hero. The simplest cordage doesn’t need to be braided, twisted, or sliced. It’s ready to use “as-is” from the plants that provide it. Flexible vine runners like wisteria, long rubbery roots like spruce roots, and ribbon-like strips of bark can all be used as a cordage alternative. They’re usually too stiff to fasten complex knots, but a simple sheet bend will usually do the trick. And for the more plant-knowledgeable survivor, inner bark fiber from certain trees can be twisted into two ply cordage of any length and thickness. All you need is the time, raw materials and a little practice.

Different stone working techniques can be used to create razor sharp blades from common rocks all around the world. For example, by striking a thin edge on a piece of flint or quartz with a small stone cobble, you can drive off a sharp stone flake that can be used for many camp tasks. From slicing rope to cutting up food, these blades can be as tough as the stones they hail from. And here’s the trait that actually gives them a leg up on your expensive survival knife: These stone flakes are disposable. You wouldn’t want to butcher an animal with your one and only knife, if you had something else to use. I’ve not only skinned, but also butchered, entire deer with sharp quartz flakes. When you’re done, you don’t have to put a dirty knife back into the sheath. Just chuck the stone back into the woods and keep going.

If you’ve never considered trapping as part of your survival skill set, there are many reasons to think about it. Trapping can be used for predator control. Traps can also give you the opportunity to harvest game animals that aren’t practical to hunt (such as nocturnal species). Trapping can even help you to collect calories when it’s too cold or wet to be outside. This skill is a smart and practical way to increase your odds of bringing home meat—when you follow the rules. In order to harvest game, even when you’re not there, you’ll have to fool their nose and play the numbers. Human scent must be minimized when handling and setting traps in wilderness survival settings and other situations. And you’ll have to set dozens of traps to have a chance to catch game. Whether you’re setting deadfalls, snares, or some other type of device, trapping is a broad and complex skill set that is full of things that can fail. Even so, when survival trapping goes right, it almost feels like free food.

Dehydration can kill us in a matter of days, so we have to drink enough to sustain our bodies. However, we can’t just drink any water for hydration. We humans have a vulnerability to many different organisms that are found in raw water all over the globe. From viruses and bacteria, to amoeba and parasitic worms that cannot be seen with the naked eye, surface water can be both lifesaving and deadly. One of the oldest and most reliable methods for disinfecting raw water is boiling, and there’s an ancient way to do it without a pot or kettle. It’s called rock boiling. By heating small stones (collected from a dry area) for 30 to 45 minutes in a fire, you can drop these rocks one by one into a vessel to boil the water. This vessel could be a large wooden bowl or trough (something you could never place over a fire) or it could be a cavity in a rock (something too big to move or heat up). I’ve even rock boiled in pumpkin shells and holes in the ground. I recommend making a pair of tongs from a thick green stick to move your hot rocks and finding the cleanest and largest vessel you can.

Remember the little stick forts you built as a kid? Now it’s time to build another one, and this time, it’s going to save your life. There are many different survival shelters that we can build from the resources in nature. Lean-tos can block the wind and provide some warmth, if we are able to keep a fire going through the night. Debris huts are even better for nighttime warmth, though they are cramped and take longer to build. Whichever architectural style you choose, keep these tips in mind.

On the one hand, foraging is as simple as picking some weeds and eating them. On the other hand, there are a lot of subtleties in the art of weed eating and more than a few things that can go wrong. From simple acts like picking berries to more complex ones like cracking and soaking acorns, foraging can be both basic and complicated. However deeply you delve into the subject, make sure you have made a positive identification of the plant species and make certain you know how to use the plant parts correctly. Mistakes in foraging can be as minor as a stomach ache or as serious as organ failure and death. Collect wisely.

Without today’s modern navigation equipment and detailed topographical maps, you might imagine that finding your way in the wild would be impossible. That’s not true. Our species has been “finding its way” for countless millennia. So when your compass turns up missing and GPS batteries die, you can still find your way by traditional means. The sun and moon can give you a general sense of direction, as both celestial bodies rise in the east and set in the west. Weather fronts can also follow predictable patterns, with most storms and prevailing winds blowing out of the west in North America. Even at night, friendly stars and constellations can guide your way. The North Star and its surrounding constellations (the Big Dipper, Little Dipper, and Cassiopeia) can show us which way is north. If that’s not enough, stab a stick into the ground in a sunny spot during midday. If it’s exactly the midpoint between dawn and dusk, the shadow will point due north. If you’re not certain of the time, mark where the tip of the shadow falls on the ground (place a stone there or stab a smaller stick in the dirt there) and mark it again in a few hours. This will give you and east/west line, with the first marker being in the west and the second marker in the east.

Read Next: A Guide to the 15 Best Survival Traps of All Time

Fishing is more than just a great pastime. It’s an important food gathering strategy—especially in the spring and summer. Ancient fishing tackle looked nothing like the jigs and topwater lures we buy today, but that doesn’t make them less effective if used properly. Heritage fishing techniques like nets, traps, spears, hooks, and even hand fishing can still land a whopper when luck and skill collide. In a survival setting, fish can provide us with critical calories from protein and fat (two macronutrients that are hard to find in spring and summer plant foraging).

Our ancestors were skilled in tracking game animals and predators. While this art form isn’t used by most people today, tracking can still be a lifesaver in certain situations. Staying alert and “reading the signs” can warn you a of the dangerous creatures in your area (like bears and mountain lions). It can also help you locate wild game animals for food. When you find clear footprints, you can follow a trail of their tracks, and might find the animal itself.