A great survival knot to add to your arsenal 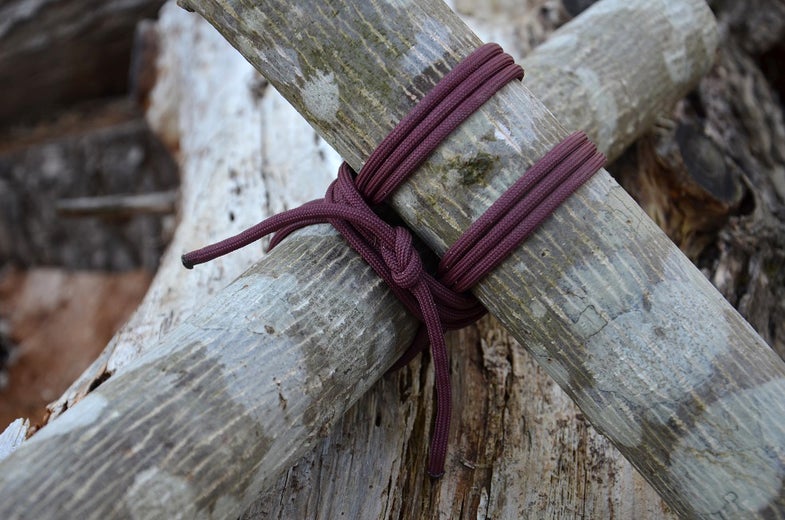 A square lashing is great for securing poles or logs together. Tim MacWelch
SHARE

Using a rope to tie things together is as old as the hills, and it’s a necessary skill for every outdoor adventurer. But oddly enough, knots and lashings are also a subject full of personal opinion, spirited debate, and flat out fighting. It seems that despite the general way most knots and lashings are tied, there is still room for subtle differences and individual tweeks that some people just can’t seem to agree upon. That being said, I’d like to share my version of a square lashing and five survival tasks that it can help you accomplish. And if you start or stop your square lashing a different way, then God bless you anyway and may your lashing stay tied forever.

How to Tie A Square Lashing (Tim’s Way)

The square lashing is a great way to secure poles together when they happen to be at right angles to each other or pretty close to a right angle (you’ll need a diagonal lashing when the crossing poles are far away from a right angle). Here’s how I tie it.

To begin, I’ll tie a square knot to one of the poles, near the place where the two poles cross. I’ll leave about six inches of rope free on the tag end of the line (as I plan to tie back to this at the end). Then I’ll wrap my line around the junction of the two poles, going under the lower pole and over the top pole. Spiral outward with these wraps three or four times. This part of the lashing is called the “wrapping” and I like to get it as tight as possible. Next, I’ll wrap between the poles, biting onto the previous rope wrappings to tighten them. This part is called the “frapping”. Once I’ve gone around about three or four times, I’ll use a square knot to tie the free end of the rope to the tag end from the square knot that started this whole lashing. Easy, right? Now a lot of folks were shown how to do a square lashing by their dad, grandpa or Scout leader, starting with a timber hitch or clove hitch, and ending the same way. I’m not saying those beloved figures were wrong, again – I’m merely offering my version. And by the way, good on them for sharing outdoor skills with you! But here’s my case for an alternative. I like the square knot because it offers some extra security when dealing with cold stiff rope and other challenging conditions. I’ve seen a lot of clove hitches come loose over the years, especially with stiff rope that’s below freezing and after being jostled. So tie it however you like, but I hope you’ll consider that there is more than one way to skin a cat (or tie a lashing, in this case)

Use The Square Lashing To Survive

This lashing has been used to build everything from camp chairs to pole bridges – but here are five easy ways you can use it in a survival scenario.

Your injured buddy has had enough bad luck for one day. Use four square lashings and four stout poles to make a stretcher that won’t fall apart. You don’t want to drop him and make things worse, do you?

Lash a pole between two trees and set up a tarp or poncho over it to create a lean-to or A-frame shelter.

To get off the ground in wet or buggy conditions, square lashings allow you to make a raised bed for a safer and more comfortable night’s sleep.

Need to get to something out of reach? Whether you are trying to get fruit up in a tree, or get yourself up in a tree – two long poles and many short ones (with a big hank of rope) can build a simple yet effective ladder.

In flooded country, or next to a raised platform shelter, a fire platform can be a valuable asset. Lash together sticks and poles until they resemble a table. Plop a thick layer of mud on top, and smooth it out. Light your fire on top of the mud. The gooey mess will harden as the fire burns, and wet or dry – it provided a barrier between your fire and the flammable frame.

So how do you tie your square lashings, and what have you used them for?