Talk about a survival story: A full century has passed since the invention of the lighter, yet matches remain a... 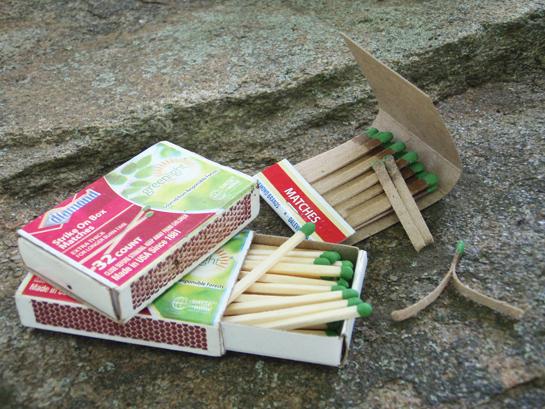 Talk about a survival story: A full century has passed since the invention of the lighter, yet matches remain a staple in survival kits. Lighters last longer and can resist water better, but there’s something about matches that keeps them in circulation.

Maybe it’s the fact that they’re plentiful and often can be obtained for no charge from bars, restaurants, and some stores. Or maybe people like matches for nostalgia reasons. Whatever your fixation, here are three match tricks that will give you a boost when you’re down to your last box or book.

Split Matches: Wouldn’t it be nice to have the ability to double your store of matches, especially when you can’t resupply? You could try splitting your individual matches in half. The paper book match is the easiest to split. Tear one free from the book, and gently peel the paper in half, starting at the torn end of the match. Try to make sure the split gives you equal paper on each side. Keep in mind, though, that these halved matches only have half the burn time of a regular paper match. They are also more susceptible to the wind. But if you strike them carefully, each one will be capable of starting dry, fluffy tinder ablaze. Split wooden match sticks, especially the large kitchen matches, with a razor blade or sharp knife. Pierce the wooden stick just below the chemical head on the match. Rock the blade a little and shear the match stick in half. The chemical head should pop in two as the stick does. There are stories of desperate folks splitting large stick matches into six useable pieces. I don’t doubt these stories, but settle for cutting them in half before you try sixths.

Matchstick Candle Wick: You have plenty of candle left, but the wick is gone? No worries. Just poke a hole down into the wax with a sharp instrument. Insert a match stick into the hole with the chemical head up. Light the match, and as it burns down, it will start to melt the wax. This liquid wax will soon wick up the burned stick just like a fiber candle wick. It’s that easy.

Waterproof Your Matches: Since we’ve got a candle going and some melted wax available now, we can perform one last match trick. A quick dip in that melted candle wax, followed immediately by blowing to cool the wax, will create a waterproof shell on the outside of the match’s head and part of the stick. This can give you a match that is more resistant to dampness and longer burning. The wax will melt and burn as the match does. Just make sure you dip and cool the wax quickly, or it will soak into the chemical head and ruin it. Also, be sure to scrape the wax off before you try to strike the match, or it will gum up the striker strip on your match book or box.

Do you prefer matches over lighters? Know any other match tricks? Let us hear them in the comments.