The Best Over/Under Shotguns for Less than $1,000

It is possible to get a great gun for a good price. 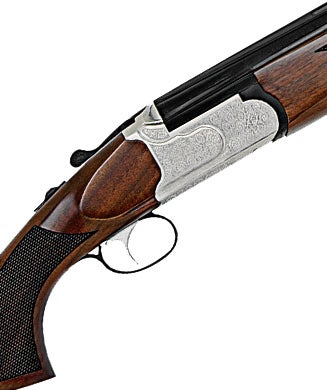 Mossberg has a reputation for building reliable firearms for folks who prefer affordable performance over aesthetic frills. That function-before-form strategy applies to the company’s recently released Silver Reserve II Series of double-barrel shotguns, upgrades over the original Silver Reserve series released in 2005.

Nearly all 18 models of over-unders and side-by-sides in the series carry suggested retail prices of less than $1,000. So I took the 12-gauge field model of the SRII for a test drive to see how much a grand can get you these days. Turns out, I got more than I expected. Check out my review of this gun and five other great over/unders that retail for less than $1,000.

My Mossberg Silver Reserve II test model featured 28-inch split ventilated-rib barrels with a single bead. It has a classic deep blued finish. Overall, the metalwork was decent, although there were some rough edges and what appeared to be material between the two barrels that was missed in the milling process.

The tang-mounted safety/barrel selector operated with a positive “click” when changing from safe to fire and between top and bottom barrels. Barrel selection can only be made when the gun is on safe. One thing I appreciated, although others might criticize as a safety issue, is that the safety does not reengage when the gun is opened. For occasional clay target shooting or hot dove shooting, I like this feature.

My test gun came with extractors, but an ejector model is also available for a few bucks more. The extractors operated flawlessly and raised the shells high enough to easily remove them in a hurry.

The gun shipped with five flush-mount choke tubes, a wrench and a small plastic choke tube case. I wasn’t overly impressed with the quality. The threads seemed rough and gritty, even after I scrubbed them clean. And the threads were cut into the muzzle end, instead of the bottom end, of the choke tubes with two small notches removed from the tubes for getting purchase with the wrench.

This exposes part of the barrel’s threads to grime and dirt. Mossberg marked each choke with a series of small grooves on the muzzle end, with the number of grooves indicating the choke constriction. This doesn’t look great, but it does allow the user to ID the choke when installed, which is a nice feature.

At first I was unimpressed by the trigger. It broke awkwardly, with a hard back wall. But after a few rounds of clays, it seemed to break in and operated flawlessly, with an extremely fast reset time to the second barrel.

I gave it a good workout by shooting some quartering-away targets, then following up each initial shot by shooting a piece of the broken target as fast as I could with the second barrel. By the time I sent it back to Mossberg, the trigger was one of my favorite features. If you buy one, give it a little break-in time to grow on you.

The walnut stock on my test gun had nice grain for a gun with an MSRP of $693. It was even on par with some of the popular over-unders you’d see in the $2,000 price range. It was given a satin, no-frills finish. I liked the slim butt stock. It came to my face quickly for fast shots on low, zipping outgoing targets. It has a standard pistol grip.

The polished, silver-finished receiver was given a nice wrap-around scrollwork, an upgrade, in my opinion, from the roughly done gold-finished bird engravings on the original model. A Mossberg “M” is engraved on the underside.

The gun locks closed with a steel slab in the bottom of the action. Although the gun opened and closed without too much resistance out of the box, I felt the action locked up good and tight.

My only real complaint with the action was that the top lever occasionally swung back to the closed position when the gun was open. Several times I attempted to close it only to have the barrels come down on the locking slab in the action.

At less than 7 ½ pounds, this gun isn’t too heavy to carry afield but is too light for high-volume shooting, in my opinion. After a couple rounds of skeet doubles, I felt the recoil in my shoulder.

It felt a bit whippy on crossing targets and required a little more conscious control than I was used to with heavier sporting clays guns. But on outgoing and quartering-away targets, which are more like what this gun would be used for in the field, it was quick and steady to the target and is a natural shooter.

For pheasants, rabbits and other upland game, it’s definitely a winner. Plus, for less than $700, you shouldn’t feel bad about dragging it through your favorite coverts.

I cheated a little on the price qualification with this, Franchi Instict L, a sweet little upland gun. The suggested retail price is $1,149, but you can find it in stores for a grand. The Instinct L is the case-colored, steel-receiver companion to the Instinct SL, which has a polished aluminum-alloy receiver and costs a few hundred bucks more.

Personally, I prefer the L’s classic appearance, which includes an A-grade walnut Prince of Wales stock, split barrels, cut checkering, ventilated rib, ejectors and a gold trigger. It handles 2 ¾- and 3-inch shells and has chrome-lined barrels.

Each gun comes with three flush chokes and a custom hard case. Several other flush and extended choke tubes are also available. It comes in 12 gauge with 26- or 28-inch barrels and 20 gauge with 28-inch barrels only. Not one of them weighs more than 6.4 pounds

CZ makes seven over/under field models for less than $1,000, but the Redhead Deluxe ($926) is its workhorse gun. It comes in 12 and 20 gauge, with a stylish, yet simple satin chrome-finished receiver and dark walnut stock. Both bores are built on frames proportionate to their gauge, and each is available with 26- or 28-inch barrels. Hand-checkered stocks and chrome-lined barrels mean sharp looks and durability. Each gun ships with chokes in five constrictions. A reduced-length model is also available.

The Legacy Escort Over/Under ($622) comes in two stock options: Turkish walnut or Silver Synthetic. The walnut model is straight-forward and classic. The synthetic stands out in a crowd. Its stock looks similar to Browning’s Euro-style Cynergy stock.

A “grippy” coating covers all surfaces, while strategically placed “cobblestone” inserts ensure an even better grip where it matters most. Stock dimensions can be customized using the adjustable comb and included length-of-pull adjustment shims.

The Escort comes in 12 gauge only, with five choke tubes and either 28- or 18-inch barrels. The 28-inch models are also available with a hard case for about $50 more.

You won’t find much to complain about with the, Stevens 512 Gold Wing, ($688), nor will you find much to rave about. That’s OK. It’s a simple gun with clean lines and a few low-grade cosmetic extras on top of a blued action, blued barrels and a satin walnut stock.

It’s chambered in all four popular shotgun bores in the full-size version, and 20 gauge only in the youth version. The 12 gauge comes with 28-inch barrels, while all other models are available with only 26-inch barrels.

The Condor Supreme ($599) has slightly better wood but only comes in 12 and 20 gauge, or in a 12/20 combo. The Supreme comes with a plain blued receiver, 3-inch chamber, gloss-finished walnut stock, two choke tubes (additional choke tubes are available), automatic ejectors and a single selective trigger. There are even sporting models available.

A gentleman in my gun club owns one, and it’s not a bad option for an occasional clay-buster.

Chrome-lined barrels, five choke tubes, tang-mounted safety/barrel selector, cut checkering, a ventilated rib, and a solid, durable frame round out the package. Only two barrel lengths are available across the board: 26 and 28 inches. Of note is the 28 gauge, which weighs less than 5 pounds thanks to its alloy receiver.