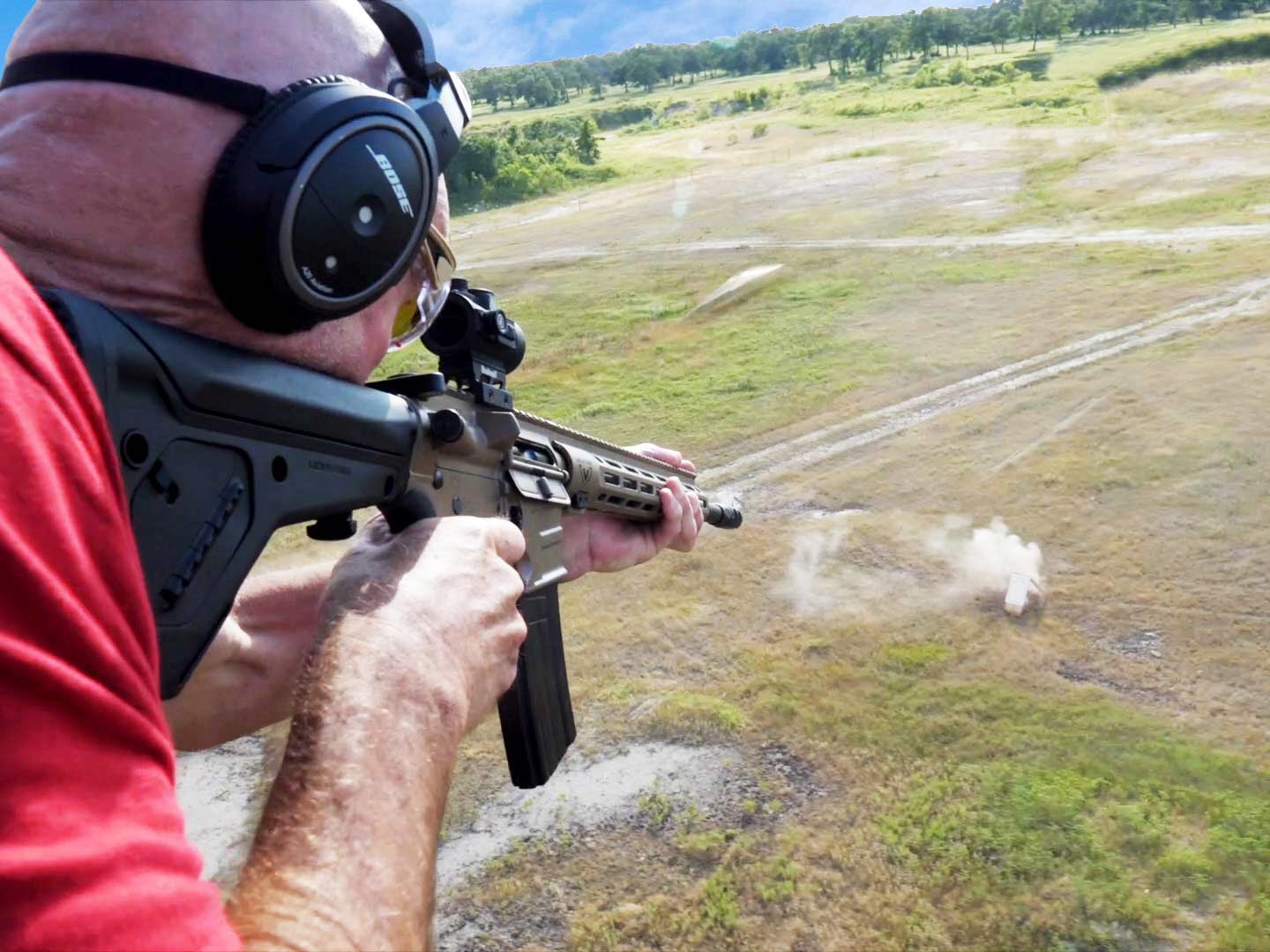 Range Reporters recently held a social media contest asking viewers to post a photo of their favorite shooting range and write about what it means to them.

We selected a submission from Cameron Bissell of Florida who highlighted a favorite public shooting range of his built and maintained by the FWC (Florida Fish and Wildlife Conservation Commission). Cameron had never shot beyond 200 yards before.

Range Reporters then flew Cameron and his wife, Tess, to Peacemaker National Training Center in West Virginia to shoot in a long-range class taught by the facility’s lead instructor, Wade Shambaugh, to shatter their personal distance records.

The couple were shooting a pair of Savage 10 Stealth Evolution rifles in 6.5 Creedmoor that we’d tuned in on our first trip to PNTC along with Federal Premium ammo built for long distances.

Watch Cameron ring steel at 1,000 yards and see if you could do the same!

Range Reporters heads to Park City, Kentucky to visit the impressive and diverse RockCastle Shooting Center. After operating for less than a decade, the “Rock” has become one of the major shooting destinations in the world.

It hosts more than 50 shooting competitions annually and the facility features a number of unique shooting environments, including trap ranges, pistol ranges, 3-Gun courses, a 2,000-yard rifle range and, the most unique feature of all: an underground cave that has been converted into a shooting course that has to be seen to be believed.

The Rockcastle Resort Property also includes a 100-room Lodge and Conference Center, an on-site restaurant, the 18-hole USGA Cave Valley Golf Club, and the Cave Valley Winery, making it a true shooting destination that’s more than just a range. As owner Nick Noble says, “It’s kind of like a Disneyland for guns.”

We followed champion shooter Julie Golob into the cave for some pitch black handgun shooting with gun lights, laser sights, and Federal Syntech Match ammunition. This is a unique shooting experience you won’t want to miss!

Welcome to RockCastle Shooting Center! In these episodes, pistol expert Julie Golob shows you how to shoot and move in a dark cave, and PRS shooter Shebrena Vaught demonstrates how to dial in your grip and stance for long-range steel ringing. Plus, enjoy more Range Reporters tips from RockCastle.

Range Reporters: Match Your Ammo to the Range

Range Reporters: Importance of Footwork When Shooting On the Move

For our next stop, Range Reporters visits Peacemaker National Training Center (PNTC) in Glengary, West Virginia to learn about the finer points of long range shooting. Peacemaker is one of the largest shooting facilities on the east coast offering a bevy of both long-distance and up-close shooting.

Their Patriot Range is a 1,000-yard fixed distance rifle range that’s a great place to hone your precision shooting game, and the variable distance Frontier Range with lots of targets on hills in a small valley will put your wind-reading and range finding skills to the ultimate test in preparation for a hunt.

PNTC also features a wide variety of training opportunities with their experienced instructors. The Liberty Range includes multiple tactical bays for handgun, rifle, and shotgun training, a public rifle range features paper and steel targets out to 500 yards, and the Homeplace Range is the spot for shotgun sports, including trap, skeet, and five stand—plus the on-site pro shop sells a bit of everything, including ammo and firearms.

In the clips below, PNTC Lead Instructor Wade Shambaugh shares some of his personal long-range tips, including what it takes to hit 1,000-yard shots with regularity using a new out-of-the-box Savage Stealth Evolution in 6.5 CM paired with Federal Ammunition!

Wade also breaks down the difference between MOA and Mils so you can understand them and decide which you should be using, and teaches you the proper way to shoot prone for ultimate stability and accuracy.

Range Reporters: Shooting from a Helicopter at HeliBacon

Range Reporters heads to Bryan, Texas for a once in a lifetime shooting experience most people only dream of.

HeliBacon, as the name may betray, is all about shooting from aerial platforms—meaning helicopters. They have a large array of full-auto firearms available for guests to shoot at a target array on the ground while strapped into a helicopter as it makes passes and circles the area.

They also have an on-the-ground target range so shooters can get more acquainted with their unique machine gun arsenal while not focusing on the thrill of shooting from a chopper.

HeliBacon CEO Chris Britt says the facility is all about helping shooters check off items on their bucket list, and they do it well—and as Britt says, “there are only so many places on Earth where you can shoot out of a helicopter without anyone shooting back.” One of those places is Texas.

We hopped on board the HeliBacon chopper with Team Savage shooter Patrick E. Kelley and a Savage MSR Valkyrie chambered in, you guessed it, 224 Valkyrie, to get some tips for shooting at static ground targets from a moving platform with negative lead, adjusting the gas system on the rifle to make the ejected brass fly in the right direction, and even some tips for keeping your gun lubed in the dustiest, windiest conditions when there’s no gun oil on hand.

Shooting with a Negative Lead from a Chopper

No Gun Oil, No Problem – Beating Dust and Wind with Motor Oil

The Preserve: Shooting at the Longest Underground Indoor Range in the U.S.

The Range at The Preserve in Rhode Island may be the nicest indoor range you’ll ever see, and certainly one of the longest! Range Reporters simply had to pay their remarkable facility a visit.

The Preserve boasts the longest subterranean indoor shooting lanes in the entire country at 150 yards. And because the range is literally built underground, there are no caliber restrictions—a rarity for any indoor range. The four full-length lanes are ideal for sighting in hunting rifles for optimum accuracy with no interference from pesky things like wind and weather.

But there’s more than just the indoor range for shooters to enjoy.

“We are a four season shooting facility,” says Eric Northrup, the Director of Operations at The Preserve. “We try to provide the best shooting experience in the world, whether its in our range or at our other outdoor shooting facilities.”

The indoor range also includes tactical shooting lanes with targets and range conditions fully controlled by an all-digital panel in the shooting bay that allows shooters to add flashing lights, sirens, and other distractions to their shooting and training experience.

Not only is the impressive range attached to an extensive gun and gear shop via a series of doors that form a kind of airlock, upstairs is a fully hunting and fishing gear store and archery shop for anything you might need, plus a digital shooting simulator that allows you to confront real life shooting situations in a completely safe environment.

We made the trip to The Preserve with YouTube superstar shooter, 22Plinkster, to see what it’s like to shoot in the country’s coolest indoor range and to give you some tips on zeroing a rimfire rifle, fitting a stock to a shooter just right, and how to boresight a rifle without a laser boresighter.

The Right Way to Sight In a Rimfire Rifle

How to Boresight without a Boresighter

A Special Thanks to Legacy Indoor Range & Armory!