Half of a Gun, and a Life Lesson, On Christmas Morning

The very best Christmas gifts are worth the wait 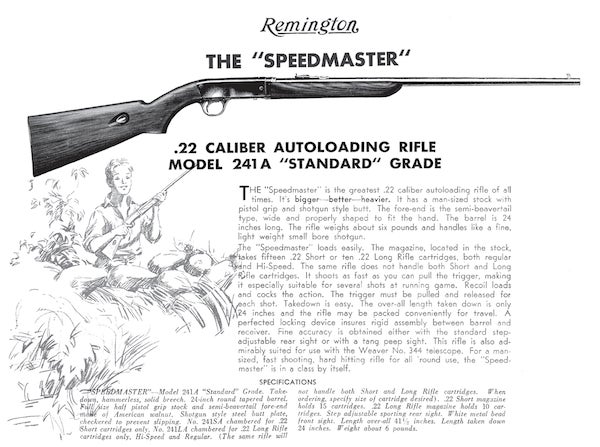 The .22 caliber Speedmaster was the ultimate Christmas present for a 13-year-old squirrel hunter. Remington
SHARE

The Christmas of 1984, I wanted a new .22 so bad. The one I had was a single-shot and the stock wasn’t long enough for my 13-year-old frame anymore. A new gun was really the only thing I was asking for. Mom and Dad had just started new jobs that year after moving our family to their hometown. Money didn’t grow on trees, and expensive gifts for children weren’t very common at all. Mom and Dad warned me from the start that it was an out-of-reach request—just too expensive. Still, like many kids, I let my hopes get the best of me.

Christmas Day came, and I opened several presents but none of them looked long enough to be a rifle. Finally, I opened a short tube. Inside was a rifle barrel with iron sights and a wooden fore-end. I was confused. It was only the barrel part. Where was the rest of the rifle?

Dad said he bought it from a widow whose husband had taken the receiver-end in for a repair before his death only she didn’t know where. Mom and Dad said they thought it would be a good project for me to write letters to all the gun shops in our area and see if I could find the other half of the gun. He explained how much fun it would be, a treasure hunt of sorts. I remember thinking something else in my head.

At the time, we lived in Hubbard, Texas. We were surrounded by other towns in all four directions, each with multiple gun shops. I was going to have to send hand-written letters to every one of them looking for the receiver end.

Throughout the day my grandfathers, uncles, and other relatives all asked what Christmas gifts I had received. I would tell them about my .22 barrel, each time trying as hard as I could to express my excitement. But really, I wasn’t all that understanding. My thoughts may have even included some colorful language. Find the receiver? Write letters? What was he thinking? Squirrel season is now! Not next month or next year when, or heck, if I finally found the receiver. I have never faked appreciation as much as I did that day. It was hard on a 13-year-old boy.

Later that evening, after two family dinners and countless forced explanations of how thankful I was for my gift, one last present appeared under the tree.

It was the rest of my rifle.

I’ll remember that Christmas for the rest of my life, and that Remington 241 Speedmaster remains my favorite .22 to this day. Just over 100,000 of these rifles were manufactured before the last one rolled off the line in 1951. However, a similar rifle based off the same design by John Browning is still manufactured and sold by Browning—the Semi-Automatic 22. This rifle incorporates the same breakdown feature, so that parents can still inflict Christmas torment and joy on their children for many years to come.

-Wade Hull is the president of Shilen Rifles, Inc.