Q&A with a Tribal Hunter on Storytelling, Taking Photos of Game, and Hunting Traditions

Josiah Pinkham has studied his Nez Perce tribe for decades, attempting to understand how and why his people hunt 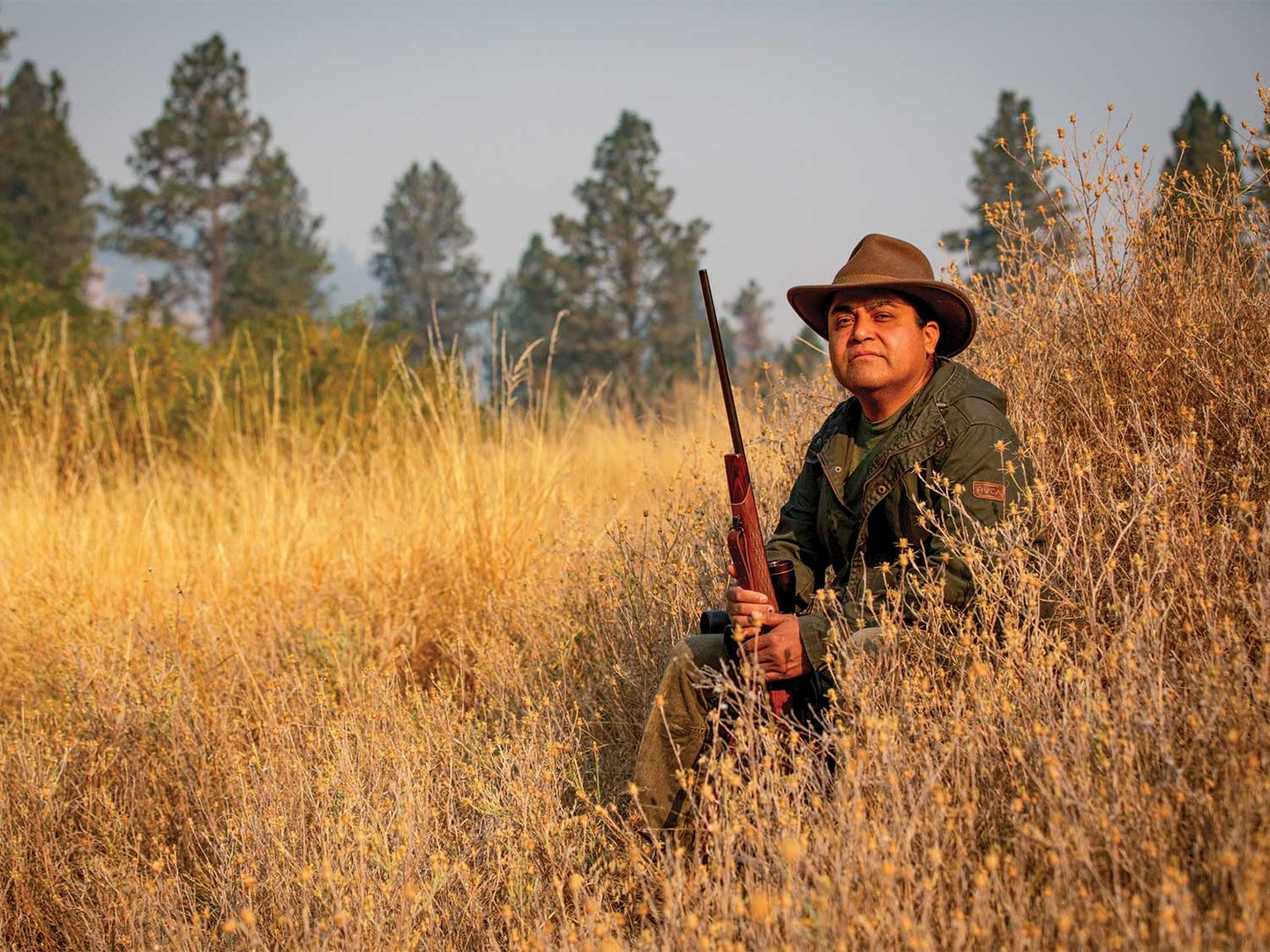 Even though the Nez Percé are an ancient people, tribal ethnographer Josiah Pinkham has spent much of his career focusing on the present and future. The 42-year-old might study the fossil record and visit archaeological sites across the Pacific Northwest, but his primary job is to immerse himself in the current customs, habits, and traditions of his tribe—then document it all. He calls it the scientific method of creating stories. Here’s how he thinks about hunting, storytelling, and passing on traditions and history.

Outdoor Life: What is your job, and how does hunting fit in?

Josiah Pinkham: I study all aspects of our culture. There’s some archival research, but I spend a lot of time talking to tribal members, learning stuff that’s important, like fishing areas, old hunting areas, places where people were buried, areas where we picked berries, and so on. One of my partners and I once learned to make sheep’s-horn bows, traditionally used for hunting buffalo on horseback. I try to focus on bigger things than my job and my career.

JP: Trying to figure out how the Nez Percé have maintained their culture and enabled them to live in a place for 16,000 years. And the responsibility is, How do I pass that along? So fitting a career into that is what I mean. The big thing is the survival of our culture, our people, our lands, our stories, and access to all of it.

OL: What role does hunting play in that survival? How did it shape the current culture of the Nez Percé?

JP: Hunting is our culture. There’s really no way we’d be here without being hunter-gatherers, and it’s something we’ve honed over the generations.

OL: Do you feel that heritage is restricted, given that the modern reservation is in Idaho but the tribe’s historic range is across the greater Pacific Northwest?

JP: In some instances, it is restricted. In some aspects, it’s easier. We’re a checkerboard reservation [with parcels of tribal and private land bundled together], but I can go to Washington, Oregon, Idaho, Wyoming, and Montana, and I can hunt any national forest without a permit. And that’s because my ancestors were savvy enough to reserve that right for me. It’s an amazing thing that I have a reservation here in Idaho, but a part of that reservation includes hunting access in other states. Reservation boundaries are one thing, but it’s really difficult for people to conceptualize me going over to Montana to hunt buffalo as part of that reservation.

OL: How much do you identify with nontribal hunting culture?

JP: Most of the time tribal hunting doesn’t look that different from nontribal hunting. We are a modern people now. We have the right to access the same hunting gear—we use rifles, compound bows, some traditional bows, and so on. The difference is the values with which individual hunters are raised and how we express them.

JP: There are some values that outsiders simply don’t have, and what I mean by that is that for us, hunting is an act of prayer. What’s really different about tribal hunting, about Nez Percé hunting for my family, is that we’re not supposed to pose and take a picture with an animal. And that’s the first thing white people do. After they kill an animal, they pick up the antlers and take a big smiling picture. We’re taught explicitly not to do that because it’s disrespectful. But we’re starting to get more tribal folks that do that, and we have tribal members who are trophy hunters. I don’t like it, but that’s the reality. The old men that I grew up around say things under their breath when the youngsters show pictures of a good-sized buck. They’ll teasingly say, “Oh, you hunt like a white man.”

OL: Is it just a few individuals, or is that where you see your culture going?

JP: It depends on the family. I don’t let my boys do it, and I tell them why.

OL: Where does storytelling come in?

JP: Stories are where the vast majority of values are embedded. Language conveys from one generation to the next their relationships to the rest of the world. Stories organize your value structure. Take the stories about the old men who raised me scoffing about white guys’ trophies on their wall. When I tell that story to my boys, I’m not telling them, “I went to this one guy’s house, he had so many trophies on the wall. He’s such a good hunter.” I’m telling them about how this hunter took all the sacred food and hung it on the wall. The way you talk about stuff establishes your values. [Focusing on antlers] is a different value system, and I don’t think it’s sustainable.

OL: Hunter recruitment is part of the national ­conversation. What does it look like for the Nez Percé?

JP: A lot of family time, first and foremost. The Nez Percé are constantly trying to refine and reevaluate their value structure in this modern time. And hunting is a core part of that because we wouldn’t be here without animals. And we need to figure out how to fit our relationship with hunting and modern values in that context. In some ways, it’s easier. Like technology makes things a lot easier—we don’t have to walk to buffalo country.

OL: And what makes it more challenging?

OL: Are you hopeful for the future?

JP: I have to be. I do worry that some of us are losing the relationship to the animals we hunt. If something’s not important to you, are you going to keep it around? Hunting is sacred, an act of prayer. And it’s worth hanging on to for the next generation, and worth fighting for.

OL: We covered a lot of serious stuff. Is hunting fun?

JP: Oh yeah. When we say that we’re going hunting, it’s more of an open activity. We say, “Hey, let’s go cruise,” and we’ll take a rifle. It’s more about being out, connecting, rustling around, and getting back to your roots—­rejuvenated and recharged. You can throw all the flowery language you want at it, but it just feels freaking good.

Read Next: Has Our Reliance on Technology Made Modern Hunters Less Capable Than Our Ancestors?

Tribal conservation programs have some unique management challenges and solutions, and even provide opportunities for nontribal hunters and anglers. Here are three to check out.

Jicarilla Apache Game & Fish, New Mexico: This agency helped restore mule deer to the 850,000-acre Jicarilla Apache Reservation and has created some of the best trophy elk herds in the state.

Fort Peck Fish and Game Department, Montana: Although antelope and upland birds are abundant, the Fort Peck program is known for reintroducing bison to the reservation and restoring the population to a huntable herd.

Shoshone and Arapaho Fish and Game Department, Wyoming: Since the department implemented game codes in 1984, ungulate populations on the Wind River Indian Reservation have soared.