Investigators determined the accident occurred due to a "very extreme ricochet," and that the hunter was not shooting in the direction of the victim 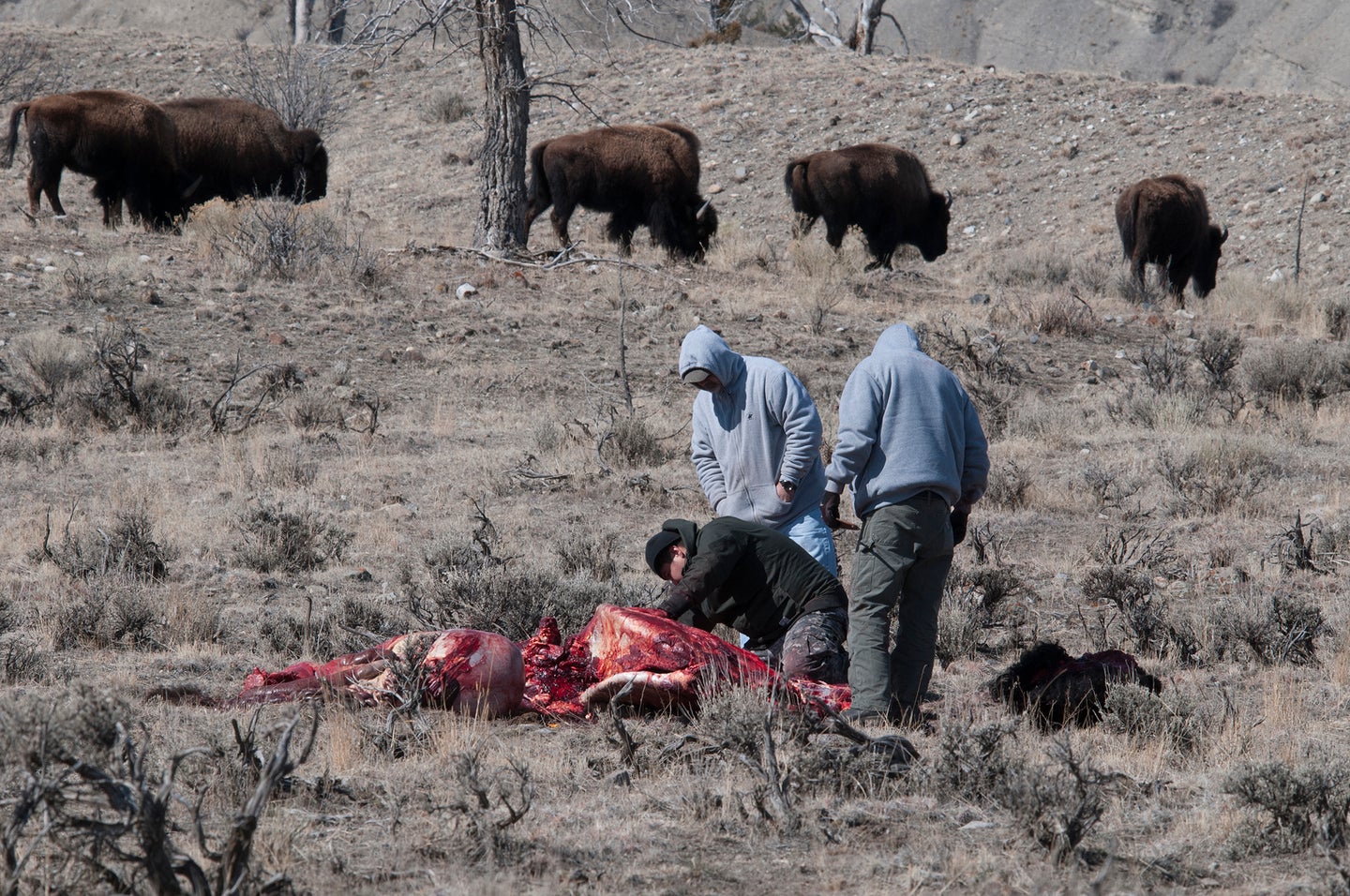 A member of the Nez Perce tribe was hit by a stray bullet fragment while field dressing a bison near Gardiner, Montana, on Jan. 17. The injury was not considered life threatening and no charges will be filed against the non-Native hunter whose bullet fragment ricocheted, Sheriff Brad Bichler of Park County, Montana, tells Outdoor Life.

Bichler identified the victim as Jackson Wak Wak and referred to the incident as a “freak accident.”

“Allegedly, the hunter shot a buffalo, and the victim was on a 90-degree angle about 400 yards away,” Bichler tells Outdoor Life. He says the accident occurred due to a “very extreme ricochet” and that the hunter was not shooting in the direction of the victim. An investigation into the events of the incident is ongoing, but Bichler, whose agency led the investigation, says authorities are not seeking charges against the hunter.

“All three investigating agencies—Park County, the U.S. Forest Service, and Montana Fish, Wildlife, and Parks—came to the same conclusion,” he says. “There was no intent and no malice.”

Critics, meanwhile, say the incident exemplifies why Montana’s bison hunt is embroiled in controversy to begin with.

Each year bison in the Yellowstone herd, which has surged past 5,000 animals, wander beyond the park boundary and onto a 400-square-mile zone of public land in Montana. (Bison are limited from straying beyond that zone to prevent transmitting brucellosis to livestock). While it’s illegal to hunt bison inside Yellowstone National Park, a strictly regulated hunt runs from Nov. 15 to Feb. 15 in that same 400 square miles.

Tribal and non-Native hunters alike participate. The Nez Perce Tribe, among other tribes, exercise their treaty rights to hunt bison outside Yellowstone, and must acquire permits according to regulations set by their tribal governments. A total of 85 licenses are also available for non-Native hunters through a draw system, which are distributed across two units to help manage the bison population.

The ricochet incident occurred near Beattie Gulch, which is roughly half a square mile in size, according to the U.S. Forest Service Gardiner Field Office. Beattie Gulch is in the southern part of the 385 Gardiner-Basin unit, which is restricted to 40 permits for non-Native hunters over the course of the season.

Dozens of hunters descend on the area as bison roam over the park boundary. Tribal governments enforce their own restrictions on how many hunters can enter Beattie Gulch on a given day. USFS officials can close Beattie Gulch to all non-Native hunters, chasing bison or otherwise, with just 24 hours notice. It is currently open to hunting, the Forest Service confirmed. Bichler confirms that law enforcement officials often patrol the area during the hunt.

Allegations From the Incident

The Buffalo Field Campaign, a non-profit organization that advocates for improved management of wild bison, says the hunt is squeezed into an area that’s too small to safely hunt, which increases the risk of accidents like this one.

“This is unacceptable,” BFC executive director James Holt wrote in a Jan. 18 letter that broke news of the incident, later adding, “I am so relieved the treaty hunter was not severely injured or killed by this avoidable circumstance – this time.”

Holt wrote that “a state hunter shot a young tribal member” and alleged that this “state” hunter was escorted through Yellowstone National Park with his bison and firearm. Holt says that transporting a gun and the bison carcass through the park would violate the Lacey Act, but according to the NPS, legally harvested game carcasses and firearms are allowed in vehicles on roads through Yellowstone. The Lacey Act largely applies to illegally harvested wildlife.

Regardless, Sheriff Bichler denies these allegations, saying that officers followed the hunter as he left the scene for nearby Gardiner without entering the park. Bichler did not provide any details about the hunter beyond that he was from the Billings area, and only commented that the aftermath of the incident was somewhat “contentious.” Frustration over the close quarters that bison hunters often encounter in the area were apparent in Holt’s statement.

“Why does Montana force treaty hunters to take buffalo in full view of public roads and local communities?” Holt wrote this week. “Why are hunters crammed into such small galleries that they end up acci-dentally [sic] shooting one another??”

Bichler likens the annual bison hunt to other public-land hunts in crowded areas. Conflict, he says, can arise when hunters feel like they’re on top of each other.

“There’s always potential for something to happen. We respond to complaints in that area,” Bichler says. “Tempers do flare.”

Still, he reiterated his original description of the incident as a freak accident. The mother of the hunter struck by the ricochet, Mary Jane Oatman, did not immediately respond to request for comment.

“The Nez Perce Tribe’s top priority is a safe treaty bison hunt for its members, other Treaty hunting tribes, State hunters and the surrounding community,” chairman of the Nez Perce Tribal Executive Committee Samuel N. Penney said in a press release issued Jan. 20. “We will continue to coordinate closely with our federal, tribal, and state partners to ensure a thorough investigation is completed and to prevent this type of dangerous incident in the future.”

The Future of the Bison Hunt

If hunter harvest grows, reliance on shipping bison to slaughter (which is arguably the most controversial element of Yellowstone bison management) would shrink or cease completely, Yellowstone National Park superintendent Cam Sholly told the Billings Gazette. Sholly hopes to have the final plan approved this year.