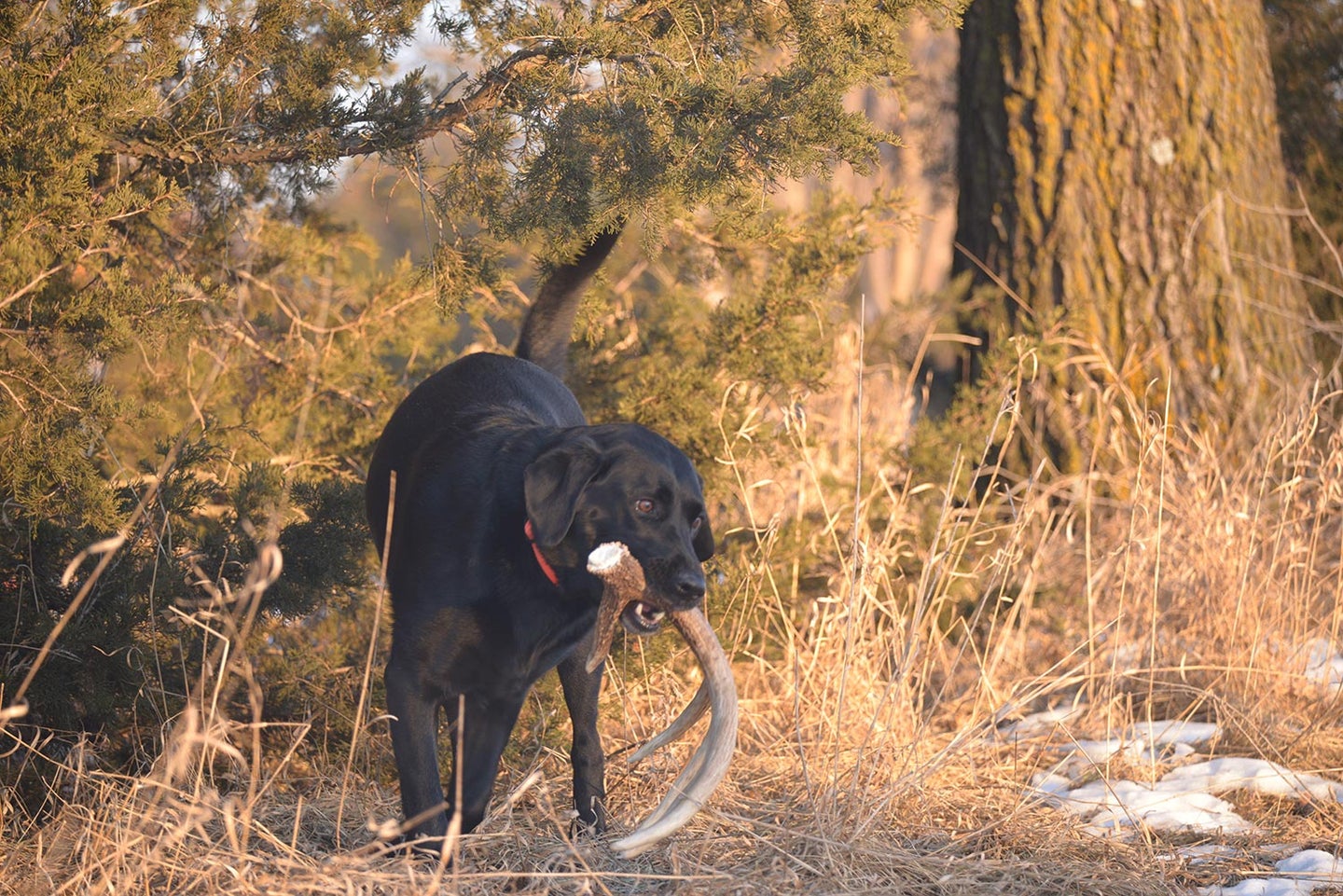 Anyone who tells you dogs are bred to shed hunt, isn’t telling you the truth. Tony J. Peterson
SHARE

The popularity of shed antler dogs has gone from zero to ludicrous in the last decade. But if you go by the success of a social media shed hunt, you’ll probably leave the woods sorely disappointed. Shed dogs are growing in popularity. And all those piles of antlers on Instagram may make the dog-less shed junkie cast a curious eye at his or her retriever. Or maybe do a quick recon on Google, searching to see what the story is on available litters of hard-driving shed retrievers. It’s understandable, and there are certainly benefits to owning a shed dog. But it’s a good idea to understand what all the buzz is glossing over. Whether you’re looking to teach an old dog new antler tricks, or pick up a pup that will be dedicated to the task, understand what you’re getting into and the outcomes are likely to be.

1. Any Sporting Dog Can Be A Shed Dog

This is a tricky one. According to Josh Miller, a seriously accomplished dog trainer and owner of River Stone Kennels, “People just get too optimistic about their dog’s ability. Sure, theoretically any dog can pick up an antler and bring it back to you, but that’s not how it works in the real world.” Miller’s words might sting a little, but they are also true. If you have a high-drive dog that has plenty of natural hold and carry ability, and you want him to bring you sheds, then you’re (probably) well on your way. A dog that is average in drive or retrieving desire might be a different story. It also goes a step further with individual personalities. Some dogs just seem to hate holding antlers in their mouths, in the same manner as others that shun woodcock or certain kinds of ducks for reasons known only to them.

2. Training A Shed Dog Is Simple

The easy part is getting ahold of a couple antlers and some deer scent and then essentially having the option to train in any environment (backyards and living rooms included). The goal, as dog trainer and owner of Dog Bone Hunter Jeremy Moore puts it, is to get a dog to associate the scent of sheds with a connection to a reward. “An antler has plenty of scent, but what a dog doesn’t know is how to connect that scent to a behavior like retrieving. That’s where proper training comes in through a soft introduction, and then gradually builds to positive nose work games.” This, Moore went on to explain, isn’t as easy as getting a dog to react to fresh bird scent, or something else they are genetically predisposed to hunting. But it can be accomplished through the proper program with enough time.

3. The Nose Is All That Matters For Success

When you dig into the broader working dog world, you find all kinds of canines that are being used to sniff out invasive species, identify and track down poachers, and even sniff out and locate endangered sea turtle eggs buried in the sand. Dog noses are incredible, but they aren’t the only way dogs learn to find sheds. Tom Dokken is a well-known trainer, and he sells a kit for training shed dogs. In it are several oversized, fake antlers used to teach dogs to look for sheds. When I started focusing on this with my own dogs, I realized how quickly they began to identify white objects laying in picked bean fields and how quickly they learned to use their eyes as well as their noses. If you’re going to train your dog for antlers, don’t ignore the visual aspect of the task. Understand that even though dogs are natural hunters, thanks to stellar olfactory capabilities, they can learn very quickly to use their eyes as well. They just need the right guidance.

4. Shed Hunting is in the Blood

“No dogs are bred for shed hunting. If you see someone advertising shed hunting lines, they may be great dogs, but they weren’t bred to specifically hunt sheds,” Moore says. There are plenty of people claiming shed dog bloodlines, and hunters are buying them. But the reality is that those dogs are bred to produce traits that lend themselves to the task of shed hunting, but not shed hunting specifically. This is no different from a breeder saying his dogs are bred to hunt pheasants, which sounds simple enough but is also impossible. Bird dogs are bred to work a certain way and hopefully express specific traits their parents possess. That should mean they’ll be an asset in the CRP where roosters roam, but doesn’t mean they were specifically bred to hunt ringnecks. The same goes for shed dogs. The traits you want in a shed dog are possible to focus on through specific breeding, and could express themselves in certain bloodlines, but those dogs were not bred to hunt antlers.

Read Next: 4 Shed Hunting Experts Told Us Their Strategy for Finding Antlers

The most common assumption with a shed dog is that they will out-hunt human counterparts and deliver bundles of antlers. According to Moore, the amount of extra antlers you’ll get with a shed dog is all about perspective. “If you’re honest about the number of antlers you usually find in a given season, which is pretty low for most people, then a shed dog might give you a 25 or 50 percent boost in finds. But that might be the difference between finding four versus three. Dogs aren’t antler-finding machines, but they do go into places we typically avoid, and that means they occasionally find antlers we would have walked by.” So if you are worried about risking a lower-back injury from carting out all of that extra bone from the woods this spring, think again.

We’ve all heard stories about dogs that just like to find sheds and will gladly bring them back to their owner during a winter walk in whitetail country. Finding those dogs is akin to a random farm litter producing a field trial champion (you’re more likely to get struck by lightning). Dogs love to chew on bones, we know that, but they usually aren’t naturally interested in antlers enough to pick them up when they are in the woods and there are so many other things to sniff and chase around. A dog has to learn to connect an antler to a reward, which means you have to train shed hunting behavior into your dog. Again, this is a hell of a lot easier with a driven dog.

I once heard Dokken explain that the smell of a rooster to a hunting dog is like a T-Bone steak, while the smell of an antler is probably closer to burnt toast. A dog that loves upland or waterfowl hunting is not going to give up on grouse or mallards to go find a stationary object that can’t run away or bleed in its mouth. Training a hunting dog to find sheds is only going to add to the season, not take away from anything you already do with your pup. In fact, it’s pretty easy to make the argument that tacking on three extra months of field time with your dog working through shed-antler environments will only make it a better hunter (and you a better handler). This is the great intangible, besides just enjoying more time outdoors with your dog.