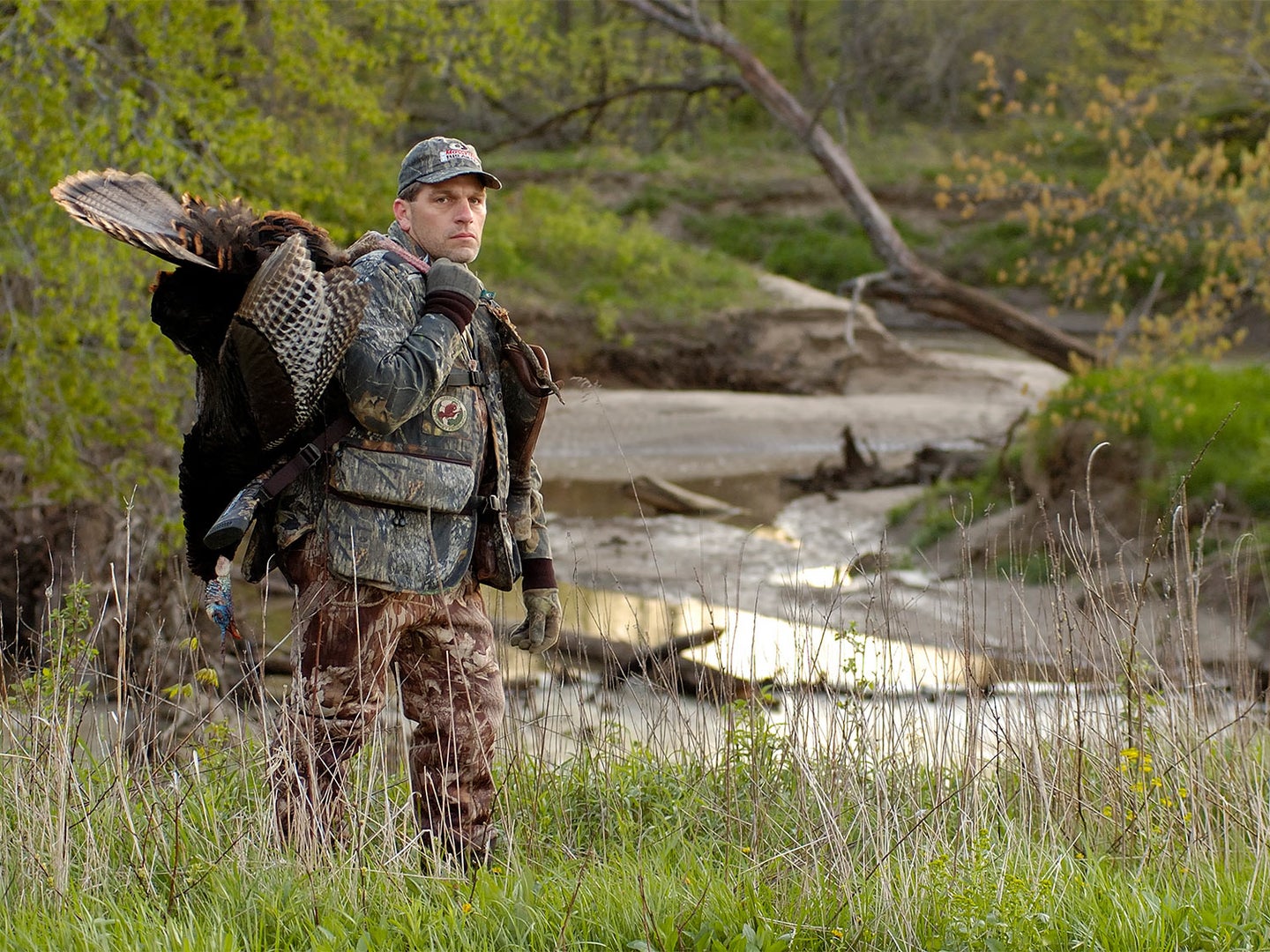 One April morning I threw the proverbial kitchen sink at an old Virginia mountain gobbler. For an hour he played along and roared back at my every call, spinning and strutting on a sun-drenched ridge 80 yards away.

“Okay mister, let’s try this,” I whispered beneath my camo mask.

I pinned a double-reed diaphragm to the roof of my mouth, and forced out a couple of high-pitched squeals. I picked up my box call, pressed the lid tight to the sounding lip and stroked some tinny whines amid a run of raspy yelps.

Big feet churned the leaves as the gobbler body-rocked down the ridge, beard swinging. I rolled him at 20 yards, before he ran plumb over me.

Listen closely and pay attention, and you’ll hear that turkey hens mix delicate squeals, whines, purrs, and moans with their clucking and yelping. These little falsetto notes can drive a gobbler wild. Tweak your calling to have the same effect. Those off-beat notes you mix in a string of yelps can bring a stubborn bird running. That’s tip #1.

Here are 24 more pointers to help you bring home a beard and spurs.

If you remember only one of these tips this should be it: On every gobbler you set up on, call lightly at first and move up the ladder as necessary, yelping and clucking with a bit more volume and vigor as you go. On 8 out of 10 toms, light to moderate calling will do the trick.

If a diaphragm call feels too wide and bulky in your mouth, trim the tape skirt a little bit with scissors. You can also bend the aluminum frame slightly downward to make a call fit more comfortably and create a better air seal. You’ll yelp better.

Two keys to using the mouth call: Don’t simply blow across the reeds, but huff air up from deep in your diaphragm. And work your jaw up and down when you yelp, just like when you talk.

After sneaking close as you dare to a roosted turkey, set up, and listen. If the tom booms and you hear no hens yelping, don’t call too early. Wait until the skyline glimmers pink, then float a single soft tree yelp to let the bird know you’re there. If he rips a gobble, hush up. He thinks you’re a hen, and he knows where you are. Listen for him to fly down and get your gun up and ready.

If you’re right-handed, hold a slate (or glass or aluminum) pot lightly in your left hand and up on your fingertips. Grasp the peg as if writing with a pencil. Hold the striker at a 45-degree angle to the call’s surface. To yelp, work the peg either in little circles or short straight lines, whichever works best for you. Don’t lift the striker off the surface as you call. To purr, exert just enough pressure on the peg so that it skips lightly over a slate surface in little lines or half-circles. Purring on a slate call is the best way to pull a tom those last few yards into shotgun range.

When a bird gobbles in a spot where he cannot possibly see you (i.e. behind the lip of a ridge or hidden behind foliage) cup a hand to your mouth and turn your head left and right while running a diaphragm. Reach out and work a friction call to either side of your body, and even behind you. Varying not only the line but also the volume of your calls enhances their melodious effects. This keeps a tom moving and wondering, “Where is that sweet little hen?”

To yelp on a box call, Mississippi turkey wizard Will Primos says to move the handle an inch or so off to the side of the sounding lip and “close the box” to run two notes together— kee-owk. “Light pressure on the lid will give you raspy yelps; put a bit more pressure on the handle for higher notes,” says Primos.

The instant they hear the thump of a gobbler pitching down from the roost at sunrise, most people get excited and start yelping and clucking. But keep quiet and give the bird 30 seconds or so to hit the ground, settle his feathers and ponder his next move. Now hit him with a run of sweet calls. If you call while he’s flopping down in mid-air, he won’t be able to hear you.

Chalk a box call liberally before you hit the woods, and a couple of times during a hunt. “Use wax-free chalk that won’t gum up the grain of the wood,” says Kentucky call maker David Hale.

Cutting on a pot-and-peg call (a glass or aluminum surface is ideal) is a good way to locate silent gobblers strutting around during the midmorning or afternoon hours. But don’t get carried away and string together too many loud, aggressive, irregular clucks and pocks that can drown out a turkey’s gobble. Rather, cutt in sharp, 3-second bursts, then stop abruptly and listen. A single shock gobble, faint if it’s off in the distance, is often all you’ll get.

When running a box or glass call, hold it well away from your body and point it toward a ridge or creek bottom where you think a silent tom might be strutting. This enhances the volume of your yelps and cutts, and helps to funnel them to where you think a turkey might be.

One of Mark Drury’s go-to tactics is to pop up a camo blind smack in the middle of a field where, from scouting, he knows a gobbler comes to strut for the day. “Get up super early and use cover of darkness to slip in,” says Drury. “Set a hen decoy and a jake 20 yards from the blind and in the direction of where the turkey roosts.” When the bird gobbles at first light, sit tight. If he files down, works to the field and sees your decoys he’ll usually run right to you, though with turkeys you never know. Factoid: While a new blind in an open field will spook every deer that sees it, turkeys couldn’t care less and will strut right up to it.

An old-time turkey hunter once told me that the two best woods for friction calls are cherry and walnut. “Cherry for high-pitched yelps, walnut for hoarser notes.” I’ve tried hundreds of wooden calls over the years and the old guy was right.

Surprises me how few turkey hunters use binoculars. They’re handy in the East and a necessity in open country where Merriam’s and Rio Grande toms strut. Whenever you can spot a longbeard and move in close before calling to him once, your odds of killing that bird go way up. Tote a compact 10X binocular in a vest pocket. Vortex, Leupold and others make affordable models good enough for turkey hunting.

A gobbler leaves a middle toe print 2½ inches long. Narrow, squiggly grooves to either side of a track are “strut marks” where a blown-up bird scraped off the tips of his wing feathers. While hen droppings are small and spiraled, gobbler scat is bigger, curved like a fishhook and splashed with white.

If you’ve worked the same gobbler from the same general spot several days in a row, change it up the next morning. Approach the roosted turkey from a different direction and set up in a fresh spot. Use a new mouth or friction call that the bird has never heard. Heck, try a gobble tube as a last resort. Be creative to fool a crabby turkey.

One April day Missouri, hunting legend Ray Eye was strolling out a ridge when a gobbler roared down in a creek bottom, hard and out of the blue. “Every hunter I know would have set up right there and started calling like mad,” says Eye. Instead, he kept walking right toward the hidden bird. “Why set up a long way from a turkey when you know he can’t see you? Besides, by moving and shuffling leaves, a gobbler thinks another turkey is coming to him. He’ll often gobble at that.” Ray shuffled on, and the tom gobbled again. He set up 30 yards off the edge of the ridge and yelped one time. The turkey ran up out of the creek bottom and when he crested the rise, “I swear he was huffing and puffing,” Ray says with a laugh. He shot the bird at 10 yards. Lesson: How you play the terrain is a lot more important than how well you call.

I learned this trick from Kentucky call maker Harold Knight: “When you get the chance, set up to call within gun range of a bend in a logging road. A gobbling turkey likes to step out into a curve where he can strut and look both ways down the road for hens.”

Many days in April you will sit down to work a gobbler that struts with 2 or more hens. Listen to the dominant, most vocal girl and mock her. If she yelps, you yelp. If she clucks, you cluck back. Rile up a boss hen and she may come to check out the sassy new girl in town (you)—and tow the gobbler into shooting range.

Your mocking calls to a lead hen won’t always bring in a sharp-spurred strutter, but you might get lucky and reel in a satellite tom traveling on the fringes of a small breeding flock. The turkey won’t be the dominant bird, and he might not gobble, but who cares? He’s likely a 2-year-old with a 9-inch beard, take him!

When an Eastern turkey roars close in the timber, his gobbles seem to rattle the ground. When a Rio or Merriam’s gobbles on an open plain, he sounds like his head is stuck in a coffee can. Don’t let the acoustics of the habitat fool you. A gobbler out in the open is usually closer, sometimes much closer, than he sounds.

When a turkey is gobbling and moving your way, it’s best not to call anymore. Sit back, enjoy the show and let him come. But if he stops and hangs up 60 or 70 yards away, you’ll need to coax him discreetly. When the turkey gobbles or drums, or stirs leaves with his feet, you cluck, yelp or purr softly. When a gobbler makes noise, his hearing is less acute, and it’s tough for him to nail the precise location your calls. The bird will have to inch 20 or 30 yards closer in search of that sweet-talking hen, and that’s when you take him.

You’re set up against a tree with a turkey gobbling like a banshee 100 yards out and coming. Get ready to shoot him before you ever see him. Pull up your knees, rest your shotgun over them and point it toward the gobbles. If he starts to veer left, ease your body and gun to the left. If he moves right, slide your knees and gun right. Continue to flow slowly and smoothly with the turkey as he gobbles, drums and crunches leaves with his feet, so that when you finally see him, your gun barrel is pointed right at him.

When a gobbler is within 40 and runs his neck up like a periscope, that’s your shot. Keep your head down and dig your cheek deeply into the shotgun’s stock. Center the fiber-optic front barrel bead (or crosshair or dot of an optic) just above the major caruncles, those fleshy, gaudy, beautiful red bubbles on the base of a gobbler’s neck. Breath deeply, flip off safety, press trigger and enjoy the flop.