In situations where you can’t carry a firearm, these personal defense tools will give you and edge 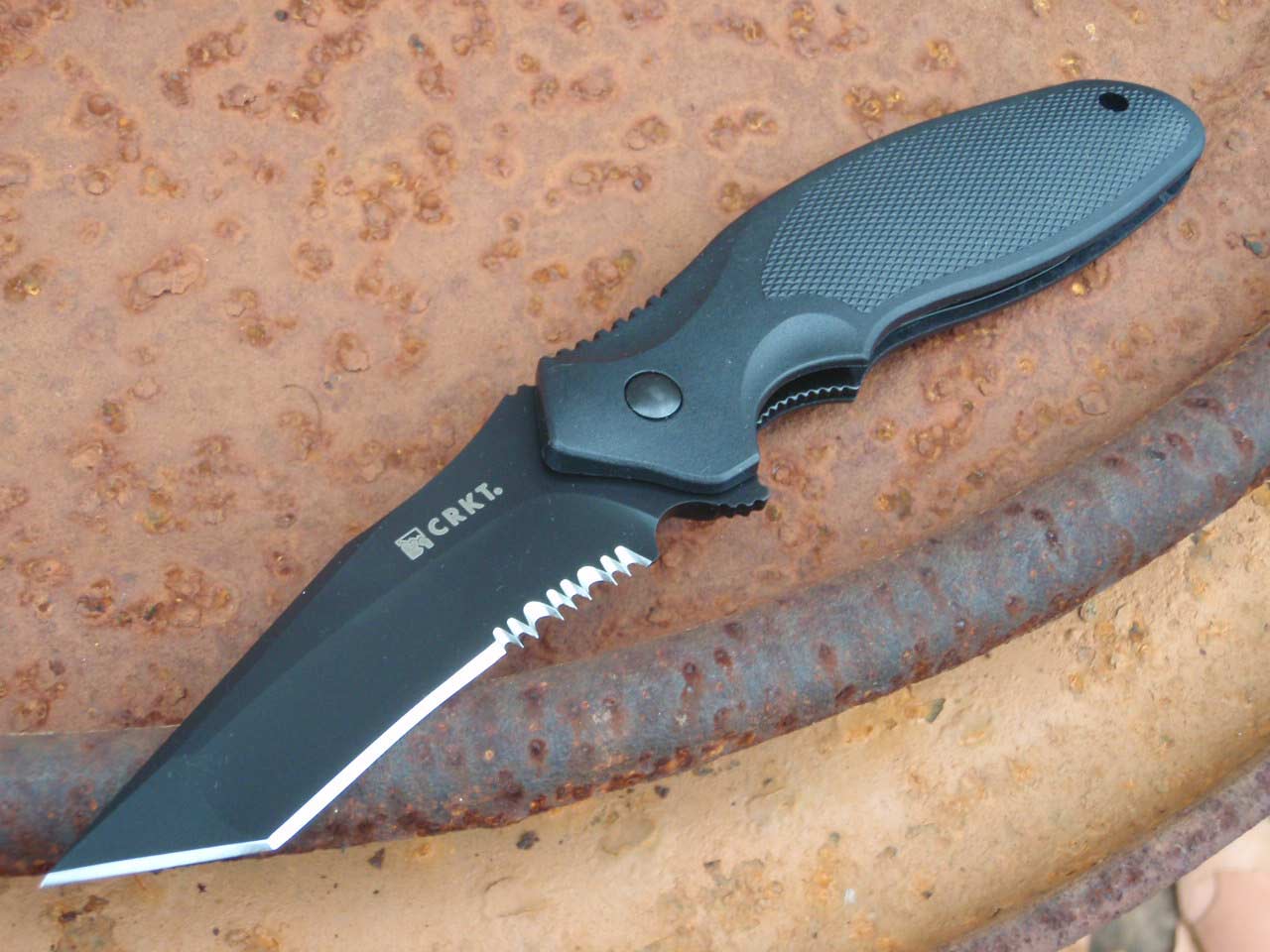 Any knife is better than no knife. Tim MacWelch
SHARE

No one wants to be the guy in a gunfight with only a knife (or a flashlight or an extra thick writing pen). But there are situations where carrying a firearm isn’t an option. Thankfully, there are more personal defensive tools in this world than guns. When coupled with situational awareness and a defensive frame of mind, these tools can still give you a fighting chance.

Staying alert and maintaining a defensive mindset is where it all starts. Whether you call it situational awareness or “keeping your head on a swivel,” you’ll naturally stay safer in public by keeping your head up and looking around (rather than being buried in your smartphone). You’ll also need to be ready, willing, and able to defend yourself and those in your care. It doesn’t matter if you’re out of shape. There are things that every person can do be safer and these things are more about mindset than muscle. I got the best advice on this from Dr. Conrad Bui and Patrick Vuong of Tiga Tactics. My daughter and I attended one of their amazing knife defense seminars last year, and early in the class these humble bad asses shared the “Law of Stupid.” It’s simple really, but like many simple teachings, it’s also profound. “Don’t do stupid things, with stupid people, at stupid places, at stupid times.” So that shortcut through the alley might be fine at 11 am, but it might be a terrible idea at 11 pm. Don’t be stupid. Use your mind as a weapon and a shield.

Your EDC pocket knife could well be a lifesaving backup weapon during a violent attack. It can also slice through a box or spread peanut butter on your sandwich for lunch. As far back as the Stone Age, humans have survived by utilizing edged weapons. We still rely on them today. Any knife is better than none. In general, fixed blade knives are more durable than folding knives, but these larger tools may not be a practical or legal to carry in certain situations. Unless there’s a “concealed weapon” issue to consider, a small folder is more of a true pocket knife and won’t be trouble to carry in many places—every day. Pick one that feels good in your hand, with dependable edge retention and sturdy construction. Your life may depend on it. I know it’s not very “outdoorsy” and it’s an older model, but I love my CRKT Shenanigan. This is one of Ken Onion’s wicked designs with a grippy diamond texture handle and sharp tanto point with partial serrations (for sawing, ripping, and general intimidation).

The nervous system jolt from a TASER or stun gun can buy you some valuable time to flee. These devices are designed to incapacitate an assailant with a powerful electric shock, sending signals to the central nervous system that are both painful and capable of causing severe muscle contractions. These devices deliver a high voltage (yet low amperage) jolt rather than a deadly bolt of electricity. Most adversaries fall to the ground with a successful strike. Hand-held stun guns are ideal for close quarters, and the more “gun-like” Tasers can fire two conductive probes up to 10 yards. These probes emit roughly 19 pulses per second, with each charge lasting about five seconds. Packing as much as 50,000 volts of power (up to 100 times the voltage of a defibrillator), Taser and stun gun shocks will disable all but the most drug fueled adversary.

Individually, house keys and other small items don’t pack much of a punch. Grouped together, however, these toothy metal items can be used as an improvised flail. Even better, you can add a sharp or weighty defense tool to your ring of keys as an extra means of protection. This added defense tool could be a spike, kubaton, monkey fist ball, or any one of a number of other stabbing or striking implements. The best application for these instruments would be at a time when your keys are in your hand, such as approaching or leaving your locked vehicle. Should someone lay hands on you, the weapon on your key chain could be driven into one of those hands, or their face, or an eye, or any other exposed and vulnerable point. Of all the keychain tools (some of which are very gimmicky) the original Kubotan developed by Grand Master Takayuki Kubota in the 1970′s is the quintessential “spike on a keychain” tool for self-defense.

Fiery hot peppers can do more than just spice up our meals. The story goes that ninjas in Feudal Japan would use pepper powder to sting the eyes of their opponents and temporarily blind them. Similar stories from China predate the iconic Japanese ninjas. Jumping forward a few centuries, the idea of a blinding and burning weapon was reimagined as German chemists devised the first “tear gas” in 1870. Into the future again, modern pepper spray (also known as oleoresin of capsicum or OC spray) came into common use in the U.S. in the 1980s. Popularized by its application as a “dog repellent” by the Postal Service workers, this spicy spray soon spread to the law enforcement realm. Today, companies like Mace and Saber produce a wide range of OC spray products, each with their own special formula and features. There can be no debate that pain is a compliance tool, but there is perpetual dispute over the safety and effectiveness of OC spray. While it has deterred some attackers completely, in other cases, it only enraged assailants.

A super-bright flashlight is a complimentary self-defense tool. You’ll want a light that can destroy someone’s night vision and leave them disoriented for a second or two. You’ll also want a light that can be used as a weapon during an emergency. This can be a stout and heavy flashlight that can double as a baton or club. Or it could be a smaller light with a striking edge. Whichever size you choose, you’ll want an ultra-bright bulb, high powered batteries, a strobe setting (useful for disorienting and nauseating a foe), and you’ll want it to be easily accessible. Bring the light with you on every trip. I’m still using my SOG Dark Energy 214, which is several years old but still going strong. This small light has a big output, a knurled texture for great grip and small square teeth around the lens (as a striking surface and DNA collector). Newer versions of this light are now available, and there are several variations you can choose. Just make sure you keep fresh batteries in the light and available for quick replacement.

Tactical pens are items with two different personalities. They perform like any other ink-filled writing implement, but they are also rugged (and pointy) enough to act as a weapon. Similar to the Kubaton, tactical pens are sturdy spikes that are easily accessible. These pens can be carried in your shirt pocket, in your jacket or pants pocket, in a check book, tucked into a briefcase or purse. Carry it just about anywhere, as long as it’s somewhere handy. Your tactical pen offers little help if it’s buried in the bottom of a backpack or left at home on your desk. These sharp implements can be driven into the tender parts of your foe. They can also be ground and twisted into an assailant’s skin to control them (especially when you successfully target a pressure point). Tactical pens can also inflict shallow puncture wounds. Be prepared to make multiple strikes, since one brisk poking with a pen will probably not dissuade a serious attacker. Multiple impacts are your best approach, either stabbing or raking the point repeatedly into your opponent.

We get the word baton from the French word meaning stick (so Baton Rouge, the capital of Louisiana, simply means “red stick”). Solid or fixed batons have a long history of martial use, but they’re hardly pocket sized. Today’s expandable batons can be easily stored in a pocket, on your belt, in your bag, or kept handy in your vehicle. Most expandable batons can be deployed in an instant, expanding to anywhere from 16 to 30 inches in length. Batons can be one of the most reliable tools to protect yourself against a violent attack. By contrast, one ill-aimed slice with an ordinary pocketknife could lead to a lethal level of blood loss. While we shouldn’t be too worried about the fates of our adversaries, there is comfort in the idea of a non-lethal self-defense weapon that can effectively incapacitate a foe without much likelihood of killing them. Expandable batons can be found in a wide range of styles, sizes, materials and extra features.

The self-defense tools mentioned here are commonly carried items and could easily fall into the classification of EDC gear. This grouping of supplies is intended for “Every Day Carry” and it’s not just weaponry. A Bic lighter is part of my EDC pocket gear, as both a backup light source and a fire starter. Few things light a fire like another fire, and rather than trusting my fate to a finicky ferrocerium rod, I’d rather just go with the reliable flame of an everyday carry staple like a Bic lighter. I prefer a brightly colored lighter, so I can find it in the event that I drop it. I’m also a big fan of carrying a Sharpie. These trustworthy permanent markers can be vital for signaling and communication. I can write notes and leave messages on all kinds of surfaces. I can even scribe out my last will and testament on a rock, or write my SSN on all my limbs (if I’m expecting things to get really bad). But there’s an unexpected terminal use for markers like this. Light the felt tip with an open flame and the Sharpie will burn like a little candle, for a minute or two. This could help you get a fire going in wet weather, especially if your lighter is almost out of fluid or you’re down to your last match. Other popular EDC items include cordage, a first aid kit, a multi-tool, duct tape, some cash money and your cell phone. Don’t get caught empty handed (or with empty pockets) when you find yourself in need.