This trio of EDC essentials—a top pick for the best handgun, knife, and flashlight—covers the personal-protection bases 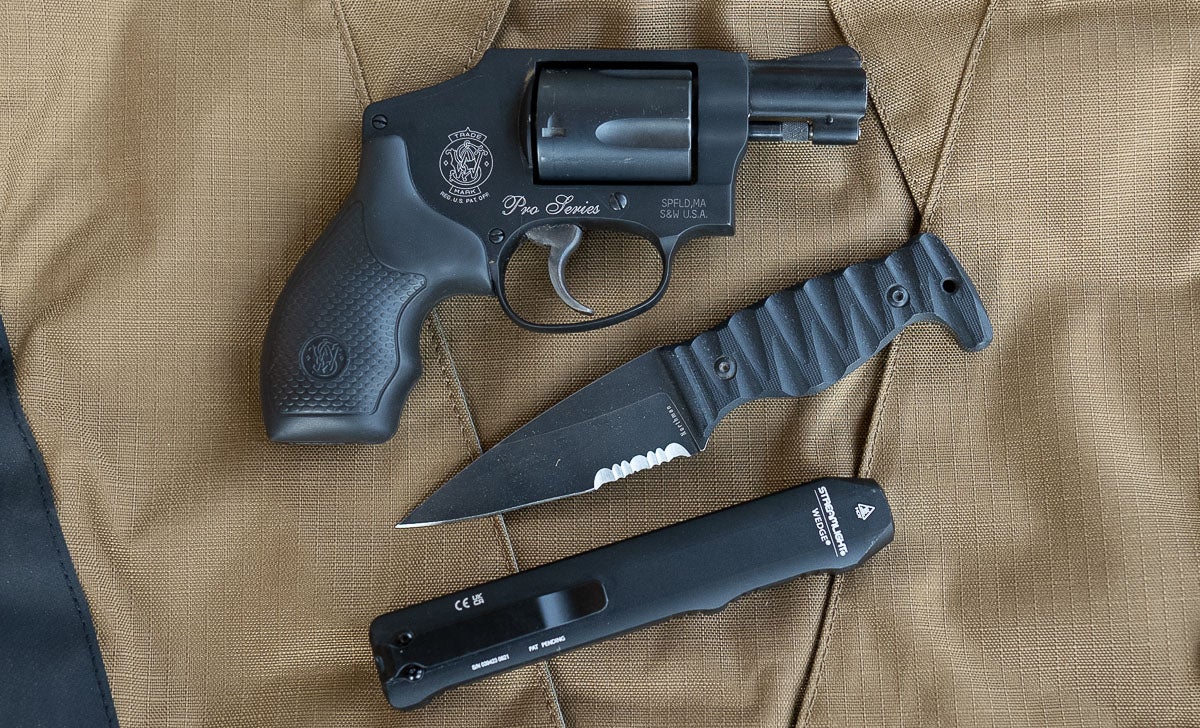 This trio—a Smith & Wesson 442C, Amtac Northman knife, and Streamlight Wedge light—is some of the best everyday carry gear out there. John B. Snow
SHARE

Determining your best everyday carry gear is ultimately an individual decision. A one-size-fits-all approach doesn’t really work. That said, these guidelines will help you fine-tune your choices as you decide what gun, knife, and flashlight suit your lifestyle and your budget. The three items I highlight here constitute one of the most versatile and minimalistic EDC kits you’ll find.

K.I.S.S. Is a Guiding Principle for EDC Decisions

Keep it simple stupid. This is good advice for most of life’s conundrums. It’s great advice when you go to assemble your EDC kit. The simpler the gear, the better off you’ll be in an emergency.

One advantage to these showcased items is that there are a total of two motions required to operate all three. The revolver runs with a simple trigger pull and the flashlight has a basic toggle switch, while the fixed-blade knife has no moving parts at all. There are no safeties to manipulate, blades to flick open, or buttons to press. The motions are simple to execute and don’t require very fine motor skills.

I don’t need to tell you that you should practice regularly with your equipment to maintain proficiency. But, as with flossing after each meal or taking 10 minutes to stretch every morning, it’s one of those “shoulds” that often falls through the cracks.

Keeping your EDC kit as simple as possible helps mitigate problems that can crop up as the result of rusty technique. That’s something to think about before opting to carry a micro-1911 on your hip.

A corollary to the K.I.S.S. principal is to go minimal with your EDC. The best everyday carry gear only counts as “everyday” if you can take it wherever you go. One advantage to this trio is that I can put them in any pant with pockets, and if my shirt is untucked or if I’m wearing a light jacket, everything is well concealed.

That portability is critical. A handgun or knife doesn’t do you any good if you can’t keep it on your person in a variety of situations. With this kit, I keep the revolver on my strong (for me, left-hand) side and put the knife and flashlight in my right pocket.

If I go somewhere where I’m not allowed to carry the handgun, the knife transitions to the left pocket while the flashlight stays on the right side.

Ask two gun owners for their take on the best carry gun and you’ll end up with at least three opinions. So, I get that many people will take issue with my selection of the Smith & Wesson Performance Center Pro Series Model 442 Moon Clip. (The name just rolls off the tongue, doesn’t it?)

The biggest points of contention would be its 5-round capacity, lack of cool gizmos—like a weapon light, laser, and red-dot sights—and the fact that most everyone these days defaults to a semiauto. It a world where worship of all things tactical dominates, revolvers have a decidedly uncool retro vibe.

This .38 Special is as sophisticated as a brick, and that is exactly why it is such a good choice for EDC. J-frames have been around since 1950 and their track record with respect to reliability is undeniable.

Of all the flavors of J-frames out there, I put this on my list of best everyday carry gear for several reasons. The compact dimensions and weight make it especially easy to carry. It has a 1.875-inch barrel and an overall length of about 6.5 inches. When I place the revolver in the palm of my hand with my fingers touching it doesn’t hang over the edges at all. The frame is made of an aluminum alloy that knocks the empty weight down to 14.5 ounces. Whether in a holster or in a pocket, the gun is comfortable to carry.

The enclosed hammer and low-profile fixed sights, which consist of an integral front ramp and a square notch machined into the rear of the frame, minimize the possibility that the gun will snag on clothing or anything else.

The synthetic rubber grips provide a secure handhold and work well in the cold and wet. The matte black finish has stood up to more than a year of hard use and helps keep the visual signature to a minimum.

The revolver is rated for .38 Special +P ammo. I’ve used two loads predominantly. Federal’s HST Micro 38 Special +P has a 130-grain jacketed hollowpoint that sits flush with the brass so none of the bullet protrudes from the case. It’s an interesting looking round, but the HST bullet is one of the top choices for personal protection as it strikes a good balance between penetration and expansion. The other is Hornady’s 110-grain FTX bullet in their Critical Duty line. Recoil from these +P rounds is certainly noticeable but not excessive.

Both rounds have worked flawlessly in the handgun and their accuracy has been fine. Getting hits on 66 percent IPSC targets at 15 yards and closer is not difficult. It takes a bit of practice to master the revolver’s double-action only trigger—especially if you’ve never shot a wheelgun before—but that’s what dry firing is for. To facilitate quicker reloads, the revolver ships with a moon clip.

For more intense practice sessions I roll with Black Hills Ammunition .38 Special Cowboy Action loads. These 158-grain slugs have a muzzle velocity of just 800 fps so they shoot soft and are easy to manage.

I couldn’t begin to guess how many knives I’ve carried over the years. Dozens for sure. For the last couple years, the Amtac Northman has been my daily companion and I don’t see that changing anytime soon.

This compact knife has a 3.5-inch fixed blade and an overall length of 6 ¾ inches. Its design is ingenious on several levels, which is why it ranks among the best everyday carry gear. First, the symmetrical geometry of the blade allows it to be reversed in the two sheaths it ships with, meaning that you can quickly swap the knife from one pocket to the other.

As I mentioned earlier, this lets you carry it on your support side as a backup when you have a gun with you or on your strong side when you don’t. One sheath has a steel clip that keeps the knife securely in place on your pocket. Despite the miles I’ve put on the knife, the clip is still as strong as the day I got it. The clip’s design lets the knife sit deep in your pocket so that it doesn’t protrude more than a standard pocket folder. As a bonus, the sheath incorporates a ferro rod along one side that acts as a fire steel. The second sheath doesn’t have a clip, which allows for even deeper concealment.

The handle consists of two G10 scales that have scalloped grooves machined into each side. That, along with some jimping on the top and bottom near the rear of the handle facilitate a positive and strong grip.

The spearpoint blade is sharpened on one side, and I have the version that includes a short serrated section. This configuration provides a lot of versatility. The knife excels at everyday cutting chores but has a piercing point for personal protection work.

As with any spearpoint, you need to be careful not to abuse the tip—the blade isn’t designed for prying. I lent my knife to a friend of mine who was trying to remove the extractor from the bolt on his rifle and he promptly busted the point.

Now this knife isn’t cheap. It costs $450. Not only do I think it is worth it for the blade itself, but you also get outstanding customer service. I sent my knife back to Bill Rapier, who owns Amtac, and he reground the blade at no cost to return it to its former glory.

In addition to the two sheathes, the knife also comes with a blunt training knife for combative work as well.

Rounding out my list of best everyday carry gear is this slender rechargeable light from Streamlight. The Wedge is slim, compact, casts a powerful beam, and couldn’t be more simple to operate.

Its profile resembles that of a thick ballpoint pen with flat sides so it rides easily in pockets and in the types of pen-holders commonly found in bags and backpacks. It’s held in place by a clip that can be fastened on either side of the aluminum body, making the Wedge completely ambidextrous. Groves on either side of the body offer a solid grip.

The USB-C charging port located in the base of the flashlight is unobtrusive and easy to access. The light comes with a short USB-C cord for recharging.

The Wedge operates with an ergonomic toggle switch that has two modes. In the first position the light emits 300 lumens. The Wedge has enough juice to last 3 hours on this setting. In the second position the light output jumps to 1000 lumens, but this burst is limited to 35 seconds. That brighter mode is what elevates the Wedge from a regular flashlight to a tool that can be used for personal protection—for example in conjunction with the S&W revolver. The additional output can help you overwhelm an adversary who’s equipped with a less powerful light, and, of course, it’ll illuminate a larger area.

Read Next: The Top 10 Best Handguns for Carrying

The light has an IPX7 rating, meaning it is waterproof to 1 meter for 30 minutes and has a 1-meter drop rating, though I can attest that it can take bigger falls than that and survive. Combine this ruggedness with its performance, light weight (3.3 ounces), ergonomic design and the ease with which it can be carried and concealed and it’s understandable why it is one of the best illumination tools out there.