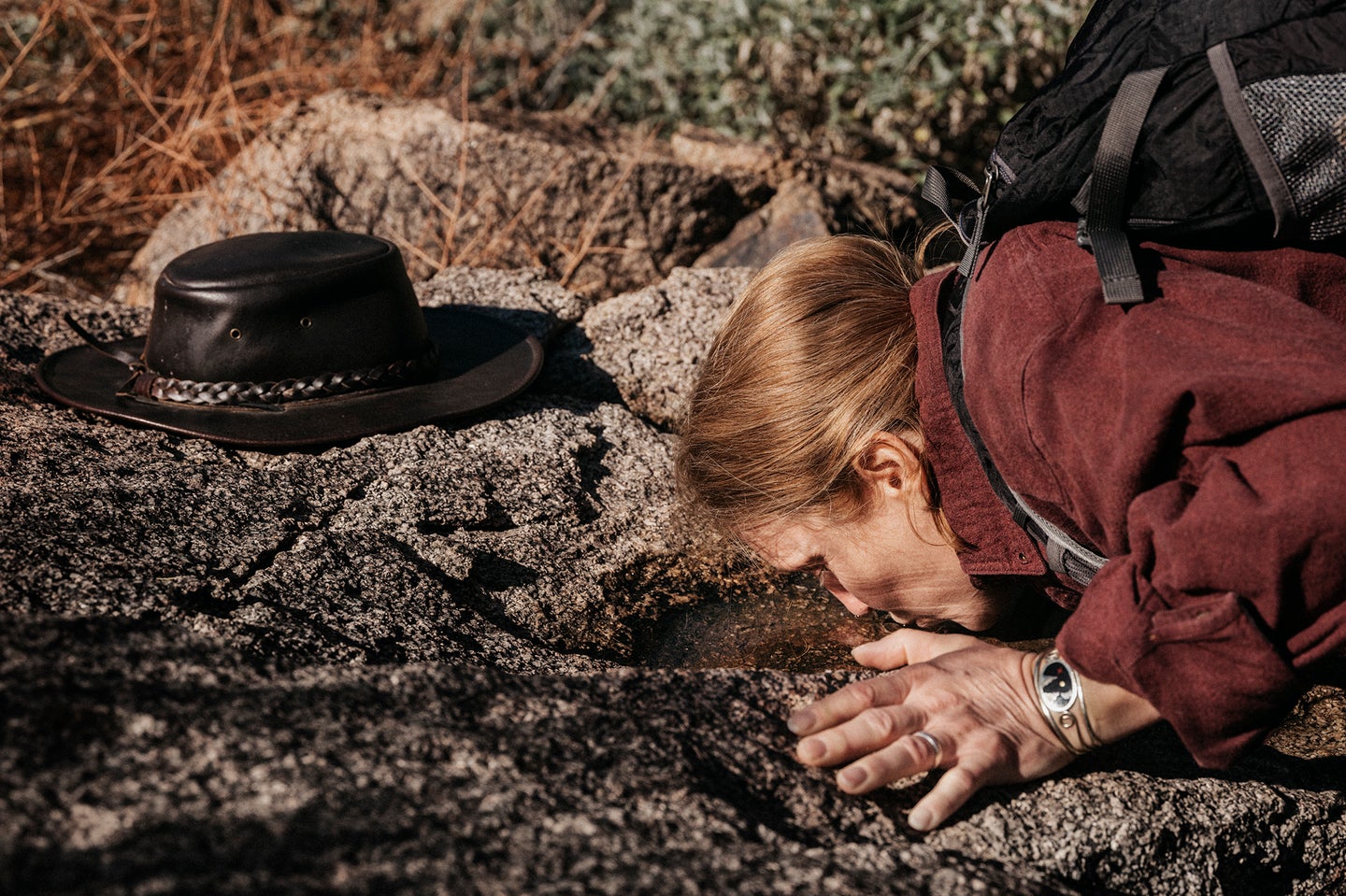 Krebs sips from rainwater that pooled on this rock overnight. Benjamin Rasmussen

This Survival Instructor’s Lesson? The Wilderness Isn’t Out to Get You

Jessie Krebs is on a crusade to make the backcountry, and the skills required to thrive there, accessible to everyone—especially the people who need it most

JESSIE KREBS just wants to go for a hike and feel raw rock beneath her thrift-store boots. She doesn’t want to be responsible for her companions, or to try to save or heal or teach them. That’s because Krebs, after long decades as a wilderness therapist and military trainer, says even the wildest places can feel like an office after a while. But recreational hikes still turn into instructional moments for Krebs, who stands maybe 5 feet 3 inches and could make a living off 100 barren miles of lava rock and lizards. We’re on a no-name ridge above the Salt River northeast of Phoenix, no destination in mind, admiring cholla and saguaro cactus and basking in the February sun, when Krebs stops midstride. She yanks off her leather Crocodile Dundee hat and pokes around the inside band.

“Ugh! I must have taken it out to get on the plane,” she says to no one in particular. She’s looking for the threaded needle she always tucks in her hat to illustrate two points she’s making. One is that day hikes are the most perilous, because we’re typically unprepared for a change in weather or a sprained ankle or a bad fall. The other is about practicing with outdoor gear long before it’s needed in a survival situation. “Dammit. I always have that needle.”

The idea, Krebs tells me, is that needle or thread alone is worthless. And trying to thread a needle to repair a sleeping bag when your hands are shaking with hypothermia? Forget it. You’ll freeze with the naked needle in your cold, dead hands.

For years at a time, Krebs has lived on the edge—of civilization, of personal safety, and of calamity. But when conditions are most dire, she summons both the knowledge and the tenacity she needs to survive. She thinks her way out of situations that might doom men with more muscle, women with better gear, or any of us without her calm certainty that while the wilderness might hold the potential for our demise, it also contains the ingredients of our salvation.

“Wilderness is a great equalizer,” Krebs says. “It doesn’t care who you are, or how much money you make, or what trauma you have in your background. It reduces everything to the moment, to a particular time and place and to the law of consequences. For some, the lack of judgment in the wilderness is healing. But other people can’t handle it, because they bring their traumas with them and end up freaking out.”

Krebs has become one of the nation’s most sought-after survival instructors. She has a course on the video platform MasterClass, with virtual colleagues like celebrity chef Gordon Ramsay and pop star Mariah Carey. Her daylong courses on knots, shelters, and fire starting have waiting lists of almost all women. She’s recruiting co-instructors to answer surging demand for her O.W.L.S. (Outdoorsy Women Learning Survival) Skills workshops. A Michigan native who now splits her time between Denver and an off-the-grid house in southwestern Colorado, Krebs is trying to spend less of her life in the wild. Not because she’s averse to it, but because she recognizes that to make it more accessible for her students, she herself must leave it for long periods.

For more than a decade, she didn’t come out of the wilderness. Instead, students came to her, often unwillingly, to be “cured” in nature. These were dry-out addiction treatment camps, where Krebs was responsible for keeping clients alive and sober while teaching them to be tenacious.

These “marginalized populations,” which she says include girls, ethnic minorities, and transgender individuals, are Krebs’ people, the ones who tend to feel most liberated once they get beyond the trailhead. It’s her job to break the intimidating facade of the outdoors into accessible tasks that build skills, confidence, and resilience in small doses.

“I want people to understand that the wilderness is not out to get you. She’s not this creature that’s hovering, just waiting for an opportunity to pounce,” she says. “Many of my students have never slept outside, for even one night. … So we start with the basics and build from there. Learn this knot. Pack this tool. Practice this skill.”

Krebs calls this “playing,” and her delight in discovery and adventure is infectious. But that quality, along with her easygoing instructional manner, are learned behaviors. That’s because, in her natural state, Krebs is twisted tight as paracord.

The bedrock of her training is a four-year stint in the Air Force, where she was first a student and later a SERE instructor. The elite Survival, Evasion, Resistance and Escape school has been the basis of our military’s defensive training since the Vietnam era. It’s designed to train airmen and -women to survive and return from behind enemy lines. It’s the stuff movies are made of. Most specifics of SERE are classified, but ask anyone who’s endured it and they’ll tell you it was the longest two weeks of their lives. Students are deprived of food, dropped on unfamiliar land, and subjected to psychological hardship to prepare them for the worst of war.

“The idea of SERE is to trigger primal memories in people by breaking them down physically and emotionally,” says Krebs. “Get them lost and hungry. They’re cold and scared, and the concept is to then teach them skills when they’re in that state, at that primal level. Most of them, if you asked years later in a comfortable environment what they learned at SERE, might recall a few highlights. But if you returned them to that primal state—stressed and desperate—all those lessons would come back. That’s the most badass way to teach wilderness survival, and I can tell you, it’s not fun. It’s not playing.”

But that, perversely, is the way modern Americans approach the wilderness. We treat it as an opponent to conquer. That has either made us afraid of the wild or discouraged us from entering it at all. And it disproportionately discourages women. That’s too bad, because Krebs thinks women are naturally better survivors than men.

“Women have more body fat, so we can live longer on our own reserves,” says Krebs. “We are built for carrying loads over long distances. And we tend to have higher pain thresholds and can withstand hardship better than men. I’m not knocking men, but historically they came around for a limited time and then left the work of raising children and creating communities—of surviving—to the women.”

What women and girls often lack is confidence, and Krebs is a gentle and persistent teacher of that perishable quality. She sprinkles conversations with stories of people who didn’t make it, and then she finds lessons in those tragedies. Krebs says that the humans with the best odds of surviving in the wild are children.

“They haven’t been conditioned by society that it’s a scary place,” she says. “They see cattails and think it looks like a bed, so they lie down in it. They see berries and they’re hungry so they eat them. Kids don’t move, and the best predictor of being saved is not moving once you’re lost. Adults move because they freak out and think they have to get home, and then they get lost or hurt.”

Alone in a Tree

Krebs has a complicated relationship with the idea of home. When she was young, Krebs was repeatedly sexually assaulted by a relative. As an older girl, when memories of that trauma returned, she felt most vulnerable inside the walls of a house.

“I didn’t trust people—still don’t—and people lived in houses, so I’d run outside. I’d climb a tree in the backyard, and that became my safe zone, and it’s where I started to realize that nature is a gift. You don’t have to dive deep into the wilderness, with a capital W, to get away. You can find wilderness in a park in your neighborhood or in a tree in your own backyard. The important thing is to find a place where you can drop your mask and let go of all your traumas.”

That’s the idea behind wilderness therapy, a field Krebs worked in for 11 years. She’s guided people—usually adolescents—damaged by drug, alcohol, and other abuse to self-inspection and self-confidence in places where they couldn’t rely on friends, deception, or chemicals. In many ways, it was the civilian equivalent of SERE. It applied the same “heightened state” theory of memory and skill retention SERE grads experience when returned to a primal state. Lessons are sharpened by the wild environment they’re learned in. “The conversations you have around a campfire and the bonds you make with someone far from the familiarity and safety of home are bonds that last for a long time after you leave that particular situation. You recall the skills, you recall the people you learned them with, and you recall the place.”

Krebs mentions an ordeal that galvanized her in just that way. She was one of 20 people selected by Nat Geo TV to follow the wildebeest migration across east Africa’s Serengeti. Film crews recorded the 35-day, 230-mile trek for a reality series called Mygrations.

“They didn’t tell us before we got there that we couldn’t hunt or forage. They gave us some twine and 7-gallon jerrycans to collect water. We had maybe 2,000 calories at the start and didn’t eat again for almost 30 days. It sucked. Most people dropped out. It was the hardest thing I’ve ever done, but the people I did it with are now family.”

On our hike, Krebs scolds her boots for sliding on a slick, house-size boulder.

“Time to hit the thrift stores,” she says. When I ask if she ever buys technical trekking boots, she snorts. “The survival world is pretty equally divided between those with the best gear and those with the best skills. I’m pretty solidly on the skills side.”

Sure enough, Krebs shows me which rocks catch dew or rain. She sparks a blaze with a magnifying glass. And she uses a tall stick and two rocks to make a compass that points the way to the road. These are all skills anyone who spends time outdoors ought to have. Krebs hammers home the notion that, like playing an instrument or speaking a second language, survival skills must be practiced to remain sharp.

She might also be talking about human relationships. Saving our bodies from disaster is only half of the survivor’s mindset. The other is remaining hopeful, which also takes practice. You have to maintain relationships and connect with your community. That’s the real lesson from her years guiding wounded souls—hers included—through the wilderness. To become unlost, you have to be pulled by something.

We play for another hour, inspecting a quartz seam and looking for desert bighorn sheep. Still, she can’t help finding teachable moments or recounting survival tragedies. Even between these stories of death and destruction, I find myself strangely relaxed under Krebs’ guidance. No matter if one of us tweaks an ankle or gets dehydrated; we will certainly make it out of this front-country wilderness. Surprisingly, it’s Krebs who finally says it’s time for us to go—she has a date tonight in Phoenix.

This story originally ran in the Survivor Mindset issue of Outdoor Life. Read more OL+ stories. And listen to seasons 1 and 2 of the Outdoor Life podcast on Spotify, Apple, or wherever else you get your podcasts.