Review: The 6 Best Fishing Kayaks, Put to the Test

Six of the hottest pedal and motor kayaks go fishing 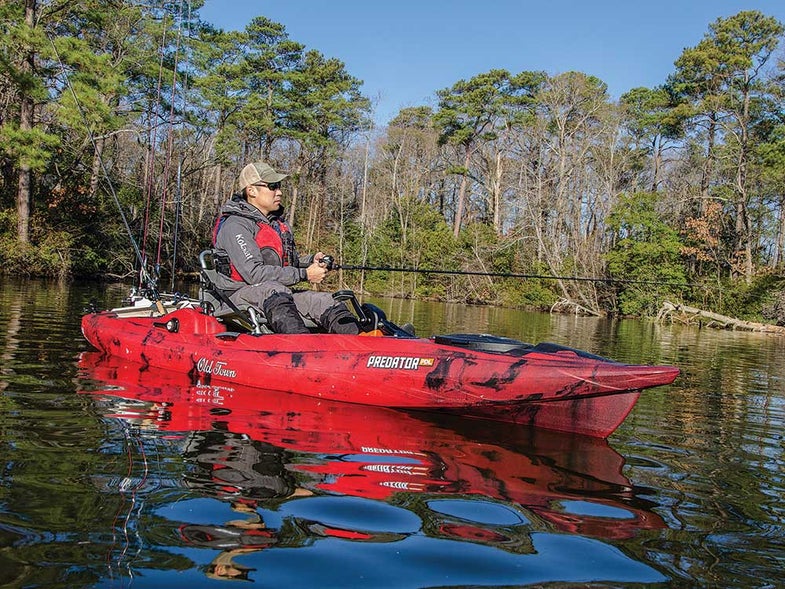 Kayaks aren’t just for tree-hugging hippies anymore. Turns out these relatively inexpensive yet capable craft are perfect for chasing everything from bluegills to blue marlin. In the past 10 years, fishing kayaks have grown safer, easier to operate, and more comfortable. Now, the latest generation of paddlecraft doesn’t even need a paddle. Pedal and motor-driven kayaks are taking over the sport. The boats are so efficient and fishable, they’re the go-to choice of many anglers for both fresh and salt water.

For this, the ultimate power kayak review, our test team splashed six of the hottest alternative-powered kayaks. Over a two-month test period, we plowed through ocean waves and bounced around tree stumps; cast plugs and trolled lures; loaded the boats in trucks and carted them across parking lots to launch sites. In short, we tested these boats the way you would use them—by fishing from them.

Ten years ago, Hobie Kayaks invented a whole new wheel with the first pedal-powered kayak. Not only was the idea outside the box, but the flexible fins and push pedals (inset) were out of this world. Last summer, Hobie added reverse to its ­MirageDrive system. Pull a cord attached to the drive and the fins rotate 180 degrees to let you push the boat backward. The new Turbo fins are just as efficient and fast as the originals. Switching into reverse is a snap—it takes only a second to reach down and pull the cord. We tested the Pro Angler 14, one of Hobie’s biggest and heaviest boats. It’s also well set up to fish hard. This is a battleship, armed with huge gear wells, tackle storage in the deck, and vertical and horizontal rod holders. We fished the boat everywhere, but the wide beam and high sides make the PA14 a natural for open water. We were able to pedal offshore, stand and cast in ocean swells, and lean over the side and land big fish with no chance of tipping over. This boat is so big that it comes with a single-blade canoe paddle for picking through tight spaces. It would be almost impossible to paddle very far without the MirageDrive 180. Like most of Hobie’s MirageDrive boats, the PA14 can be rigged with the EVOLVE electric motor or a sail kit.

Old Town has been building canoes and kayaks in Maine for more than 100 years, but this is its first model with pedals. Old Town took its sport-utility Predator and redesigned the cockpit, seat, and hull to accommodate a bicycle-style pedal system that it calls PDL Drive. Old Town worked with its pro team to configure the seat, pedals, and drive for comfort and efficiency. Tip the pedals up, and the lower unit fits into a recess in the deck so it’s out of the way when you’re launching the boat or fishing in skinny water. With the pedals down, a gear pod fills the recess to create a reinforced deck for standup fishing. Below the waterline, the tri-hull design moves water away from the keel for rock-solid stability while maintaining efficiency to cover long distances. On the ocean, the Predator rolled and sliced through big seas. In the shallows, the PDL Drive quickly retracted, and could be paddled with ease. Since each angler has unique rigging needs, the Predator doesn’t come with rod holders. Instead, the boat is outfitted with six removable accessory plates, which makes it easy to install aftermarket rod holders, electronics, and other gadgets without drilling into the hull. We all liked the oversize knobs that control the rudder. The Predator is one of the best all-around pedal boats on the market.

For years, wilderness systems’ sister company, Perception Kayaks, offered trimmed-down bargain boats. That changed last year with the release of the blinged-out Pescador 12.0, featuring gear tracks, a great seat, cool colors, and an angler-friendly layout at a great value. This spring, the company added pedals. The Pescador Pilot’s no-nonsense pedal unit combines bicycle pedals (inset) with a large propeller for an effective, compact power system. On the water, the boat’s rigging and performance proved impressive. Large open bow and stern wells offer tons of storage that keeps gear within easy reach. Two covered compartments in the bow fit stuff that needs to stay dry and offer a convenient place to mount electronics and run wiring. The Pescador Pilot 12.0 comes with four molded-in rod holders behind the seat. They proved to be a little too shallow for trolling or heavy action, but they made a convenient place to store sticks. A narrow beam and short waterline make the Pescador easy to pedal or paddle, while its flat deck made standup fishing easy. The Pilot pedal unit is compact and lightweight, but proved troublesome when adjusting tension on the pins that hold the lower unit in place. Of all the test boats, the Pilot was the most inefficient, but the system worked reliably.

Native Watercraft was the first company to come out with a pedal-powered kayak that can go in reverse. In fact, its shaft-driven pedal system (inset) was the inspiration for many of the other boats in this test. The Propel pedal unit fits in five Native kayaks; I tested it in the mid-range Slayer, which is Native’s all-around boat. It proved easy to ply open waters or tuck into coves and creeks. On the water, the lower unit is easy to raise or stow for landing and fishing in shallow water. The boat’s unique tunnel hull improves stability while giving the prop plenty of room to push water. The Slayer is outfitted with gear tracks and rod holders, allowing it to go straight from the store to the water. Native was also the first kayak company to introduce an elevated frame seat, which keeps the angler off the deck and makes it easier to stand and fish; it’s still one of the most comfortable and best-looking. The boat fishes equally well without the pedal unit, so we could even take it on rocky rivers. My only complaint: The rudder is tucked under the stern and behind the keel, which improves tracking and turning radius, but it takes a lot of abuse. Still, the boat fishes with confidence, combining a low-to-the-water profile to cut through the wind with plenty of capacity to carry a large load.

Since the beginning of the kayak fishing revolution, inventive anglers in pursuit of remote fishing have slapped trolling motors on their paddle boats. Most of these ­redneck-​­engineered systems involved scrap wood, carriage bolts, and lots of silicone sealant. For a more professional approach, Old Town partnered with sister company Minn Kota to match its big-boy Predator kayak with a modified electric trolling motor. The Predator MK is perfect for motoring to distant fishing grounds, then poling or paddling into tight places. It’s also great for folks with limited mobility or newbies—anyone can be a kayak angler in the MK. The motor pod is easy to prop up on its kickstand when entering shallow water or loading and launching. Old Town didn’t mess around with the power source—the Minn Kota is energized by a full-size, 12-volt, group 27 marine battery (inset). Carrying the battery to and from the kayak was a chore, but the Predator is big enough to accommodate the weight without affecting performance. Did someone say performance? It proved to be the most powerful boat in the test. At heart, the MK is still a Predator, so it paddles as well as it motors. The Predator MK erases the line between kayak and skiff, offering the power of a small boat and the maneuverability of a fishing kayak.

Wilderness Systems partnered with German electric motor maker Torqueedo to design a power plant that combines a lithium battery and brushless motor into a compact package that will fit in seven of the company’s boats. We tested the motor on Wildy’s new ATAK 120, which is a standup fishing specialist. It features low-profile gunnels, a narrow beam that cuts through the wind and chop, and a broad, flat hull for standup stability. In the backwaters, it motored quickly to the fishing grounds, then paddled easily through tree stumps and windfalls. One of our favorite features is the remote throttle control with a digital display that shows speed, range, and battery life. The throttle can be mounted anywhere in the kayak, but we all liked holding the throttle control when motoring, then chucking it out of the way for fishing. Wilderness’ well-regarded AirPro Max seat can be adjusted forward, back, high, low, or reclined. Best of all, the seat can be moved out of the way in order to find the boat’s most stable sweet spot. The ATAK doesn’t come pre-rigged with rod holders, but six gear tracks will secure a variety of accessories, including a leaning post. The only downside: The motor is difficult to lift in shallow water. On the water, it proved to be a compact, lightweight, and nimble fishing package.

For the Outdoor Life power kayak test, we chose similar models from the wide class of boats most popular with both fresh- and saltwater anglers. Kayaks were judged on a scale of 1 to 10 according to both objective criteria and subjective standards. Fishability measures how ready the kayak is to be fished out of the box. The test team, made up of six fishing-kayak veterans, pounded the hell out of the propulsion systems to test weight, ease of use, reliability, and power.

All of the boats proved remarkably stable, but several models scored higher in this category for their ability to allow an angler to stand and fish even in rough seas. Although manufacturers currently configure boats for standup fishing, it’s not recommended for inexperienced users. Further, kayaks, like all boats, should never be used without personal flotation gear.

The boats tested for the power kayak review have one thing in common: They are among the largest and heaviest fishing kayaks on the market. Anglers looking for a smaller, lighter option, however, are in luck. The following boats are easy to transport, store, and fish.

Advanced Elements Straitedge Angler Pro
The AE1055 is an inflatable with internal supports and a drop-stitch floor to make it stiff and sturdy. External supports offer a mounting point for rod holders and accessories. Replace the tracking fin in the keel with Current Drives’ ElectraFin motor for hands-free propulsion.
Buy It Now!

Justin Case (shown)
Made of ripstop nylon over a ­carbon-​­fiber frame, this kayak packs into a small bag, weighs less than 6 pounds, and takes 10 minutes to put together. It will carry a good amount of gear, and paddles with ease.
$790; ­justincasekayak.com

Hobie Mirage I11s
Hobie’s proprietary construction makes the i11S the lightest hands-free kayak in its fleet. Two external air chambers add stability. Rig it with a crate and rod holders, and the i11S turns into a solid fishing platform.
$2,150; ­hobiecat.com