How to Motorize Your Fishing Kayak

Trolling motor, electric outboard or factory rigged: what’s the best option for adding a motor to your kayak? 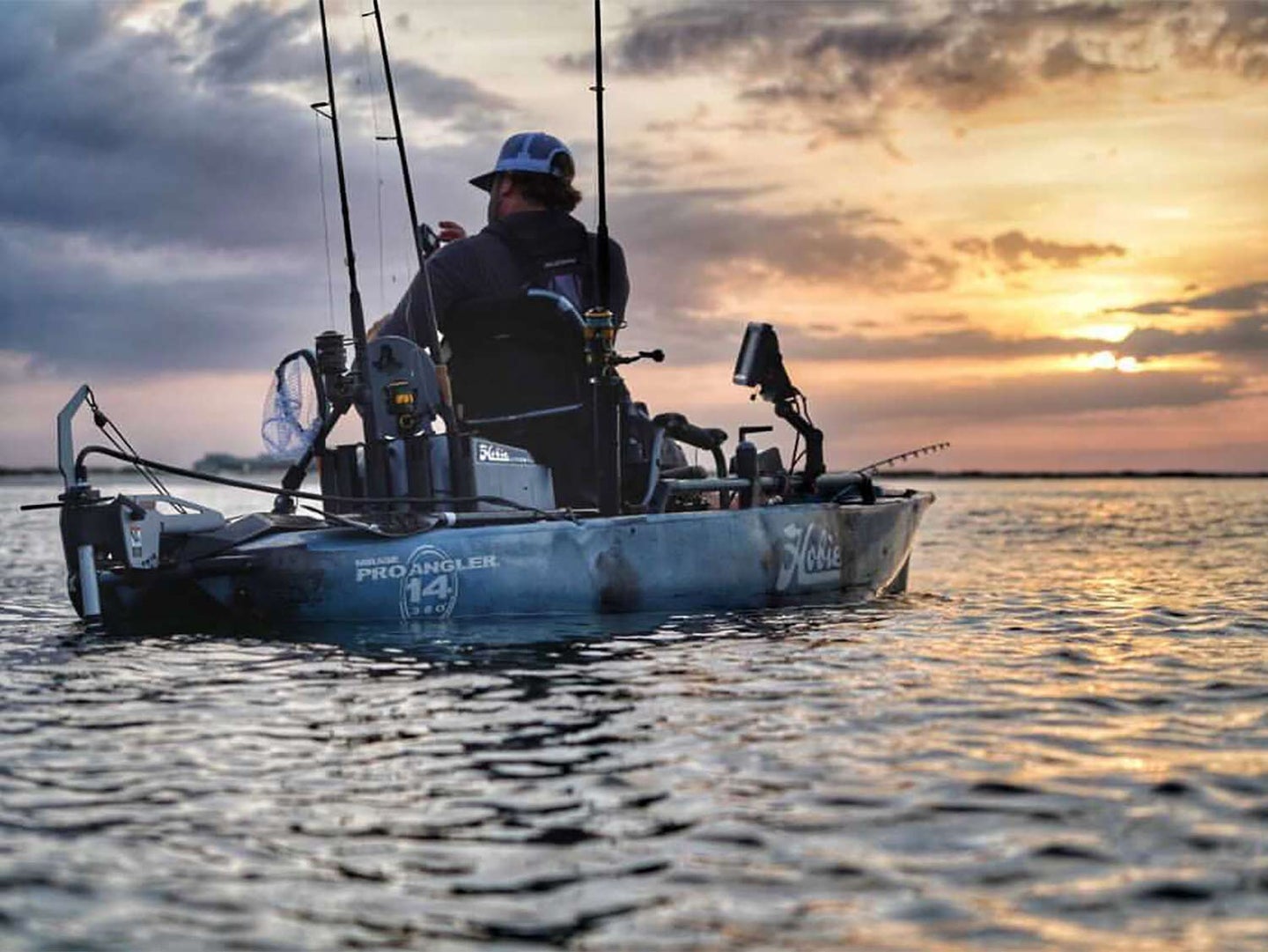 First came the sit-on-top kayak. Then the pedal-powered kayak. Now, anglers are clamoring for motorized kayaks to take them farther and faster.

Adding a motor does more than save human-powered energy, a motorized kayak turns travel time into fishing time. Now that most kayak fishing tournaments accept motorized kayaks, competitive anglers are engaged in an arms race to find the most powerful and efficient motor. Off the tournament trail, motors are popping up on plastic boats from freshwater to salt. To motorize a kayak, most anglers choose one of three options: electric outboard, trolling motor, or a factory-motorized kayak.

For anglers adding a trolling motor or outboard, the first step is choosing the right kayak. To handle the power and weight, pick a boat over 40-inches wide with at least 400-pound capacity. A shorter water line, under 13-feet long, will save weight and make the boat easier to control.

Many kayaks come rigged with attachment points to accommodate a motor system. To save weight and reduce set-up time, some anglers pick a paddle kayak to motorize. Others choose to add a motor to a pedal boat for worry-free power and hands-free fishing.

Installing an electric outboard motor powered by a lithium-ion battery is the lightest and fastest way to power a small plastic boat. Florida kayak fishing guide Brandon Barton uses a Torqeedo electric motor and matching lithium-ion battery on a Hobie ProAngler 360 pedal boat. “I use the motor to reach the fishing grounds and then switch to pedals while I’m fishing,” he says.

Barton uses the Torqeedo three ways: offshore live-bait fishing, backwater sight fishing and when he’s competing and pre-fishing a bass tournament. “Offshore, the electric motor is great for slow trolling live baits,” he says. If a storm comes up and conditions deteriorate, Barton’s motor will scoot him back to shore.

Inshore, Barton motors far into the marsh then switches to pedals to fish shallow water. The real advantage comes when he’s competing in a bass tournament. Barton says the electric outboard is the fastest to the fishing grounds. “It’s especially valuable pre-fishing,” he adds.

Installation was easy, Barton used an after-market bracket by Innovative Solutions to connect the motor to his plastic boat. To control steering, he combines the Pro Angler’s existing rudder and the pedal system’s fins.

Adding an electric outboard to a standard sit-on-top kayak requires rigging a steering mechanism. Electric outboards use a series of cables connecting the motor to a control knob and throttle. The throttle displays speed, range and other important information about the motor. Barton says, “I’ve never run out of charge before the end of the fishing day, most times I come in with 30 percent left.” The control knob turns the motor to steer the boat. Instead of turning his kayak with the motor, Barton relies on the Hobie’s rudder to steer the boat.

To transport his PA12 and Torqeedo, Barton removes the motor and battery and loads the boat in the back of his pick-up bow first with the stern supported by a bed extender. Many anglers rely on a small trailer to carry their motorized kayak. “Installing the motor and hooking up the power takes no longer than loading my fishing gear,” he says. Barton admits the electric outboard and lithium-ion battery are more expensive than other power options, but the system is reliable and nimble, perfect for an angler who relies on his kayak to make a living.

The most accessible way to motorize a kayak is by adding an electric trolling motor. For a few hundred bucks, an angler can install a 45-pound thrust trolling motor and 12-volt, deep-cycle marine battery on almost any kayak.

The most economical way to add an electric trolling motor is by mounting a tiller-controlled motor to the side of the kayak. Choose a motor with a transom clamp and 36-inch shaft. Install a mounting bracket to hold the motor off the side of the kayak. Aftermarket brackets are available from several companies, or shadetree engineers can bolt a 2×4 board across the tankwell. Simply clamp the motor to the bracket, drop the battery in the tankwell and go.

For better handling and performance, anglers can mount a remote-controlled trolling motor to the stern of the kayak. In many cases, the motor’s deck plate can be mounted to existing attachment points on the kayak. Using a remote allows the angler to control direction and speed from the seat.

A trolling motor isn’t as efficient or fast as an electric outboard, but users say the trolling motor is more maneuverable. For the ultimate in control, install a GPS-enabled trolling motor that allows the operator to program the motor to follow a course or hold the boat in place.

Tournament pro Marvin Goda (@mobbinoutdoors) has been using a trolling motor on his Native Watercraft Titan 12 for several seasons. “With the boat trimmed out I can run cruising speed around four miles per hour,” he says. Goda mounted the shaft and prop on the stern but he removed the control unit and mounted it closer to his seat.

Goda also updated to a Dakota Lithium 170 ah battery. “It might be overkill but I can fish for three days without charging the battery,” he says, a valuable advantage when he’s fishing a tournament without reliable access to power.

For the best handling while fishing, some anglers are mounting an electric trolling motor to the bow of the kayak. Tournament pro and 2018 Kayak Bass Fishing Angler of the Year Cody Milton (@codyakfish) uses a MotorGuide Xi3 with a 36-inch shaft on the bow of his NuCanoe Pursuit kayak. “I can keep the bow pointed towards the structure I’m fishing,” he says.

Read Next: The 6 Best Fishing Kayaks, Put to the Test

Milton added a mounting platform and used the MotorGuide bracket to attach the motor. His 100 ah Dakota Lithium battery saves weight and still powers the motor for up to 10 hours.

Both anglers point to the importance of weight distribution when adding a trolling motor to a paddle or pedal kayak. Milton says, “I move the seat as far back in the cockpit as I can.” This provides more room to stand and fish while controlling the motor with the foot pedal. When setting up a trolling motor on a kayak, both anglers suggest arranging the battery, motor and seat to dial in the boat’s balance.

While some anglers favor bow mount and others go with stern mount, some anglers are installing a motor on each end of the kayak. Adding an electric outboard to the stern, and a trolling motor to the bow, turns a kayak into a mini-bass boat. Marvin Goda says, “Many people are coming to kayak fishing from boat fishing and they want the same performance they had on their boat.”

Electric outboards and trolling motors allow an angler to install a motor on almost any kayak. But the trend in powered paddlecraft has led several manufacturers to release their own motorized mini-boats.

Factory-powered boats are rotomolded sit-on-top kayaks designed to accommodate an electric motor. Some models even allow anglers to choose between paddle, pedals, or motor. In most cases, the motor is placed through a well in the center of the cockpit. Speed is controlled with a throttle and a rudder turns the kayak.

Tournament pro Roland “Tex” Butler (@that_dude_roro) has been using Old Town’s Sportsman AutoPilot 136 for the past year. “The factory boat comes off the shelf, ready to fish,” he says. All parts of the system work seamlessly and fit and finish is tight and reliable.

The Sportsman AutoPilot uses MinnKota’s iPilot motor with GPS connection. Butler can program the boat to return on a course or hold in one position.

“The motor is easy to remove between trips,” he adds. The iPilot can be powered by a 12-volt deep-cycle or lithium-ion battery. The battery fits under the seat, where it makes the kayak more stable. The wires run through the hull and all the connections are weather resistant. Two kill switches shut down the motor if the propeller is exposed or the angler falls overboard.

When Butler arrives at the launch, he simply installs the battery under the seat, drops the motor unit through the deck scupper and the boat is ready to go. “Rigging the boat is just plug and play,” Butler says. Since the motor is in the middle of the kayak, when he reaches shallow water, he can lift the motor to reduce the boat’s draft. Speed and direction are controlled with a remote control. A large rudder improves the boat’s maneuverability, especially at cruising speed.

Whether an angler chooses to DIY a trolling motor onto a kayak, install an electric outboard or purchase a factory-rigged motorized kayak, adding power to a small plastic boat has never been easier. With electric power, an angler can go farther and faster with less effort and more confidence.