The 7 Reasons You’re Not Killing Turkeys on Public Land

Public-land toms can be tough, especially if you're making these common mistakes

We’re living in the golden age of turkey hunting. Most states in gobbler country have strong bird populations and hunting seasons that offer plenty of opportunity. But calling in and killing a spring gobbler can still be tough, especially on public land. Take my home state of Minnesota for example. We’re covered up with birds and habitat. But the hunter success rate for the spring season hovers around 30 percent. That means two out of three Minnesota turkey hunters are going skunked this spring.

I’ve screwed up my fair share of public-land turkey hunts, but I’ve learned from those bone-headed mistakes. If you’re struggling with public-land hunts this spring, you’re probably doing one (or all) of the following: 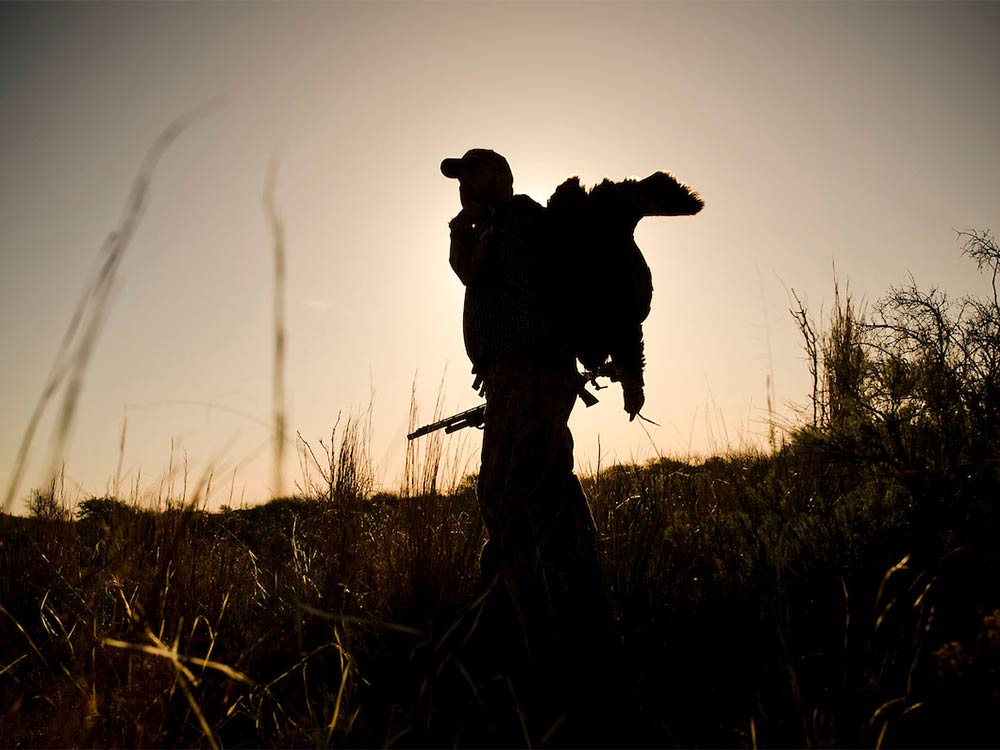 You Hunt the Obvious Birds

Hike farther from the parking lot to find birds that other hunters aren’t messing with.

Birds that you can hear gobble from the parking lot, birds you can glass from a busy road, birds that roost at the end of a walking trail. Forget ’em. Any public-land gobbler that seems too good to be true, probably is. If you were able to find them without much effort, other hunters certainly will too. If you spend your morning setting up on these “easy” birds, you’re almost guaranteed to bump in to other hunters and your enjoyable outing in the woods is going to get frustrating quick. It might seem crazy to pass up turkeys to find turkeys, but you’re much better off hunting birds that other guys aren’t messing with. Just like deer hunting on public land, you’ve got to do a little extra walking to get away from the crowds. Also, you’d be surprised how many turkey hunters won’t cross a creek or a marsh. Wader up and find birds that haven’t been called to yet. 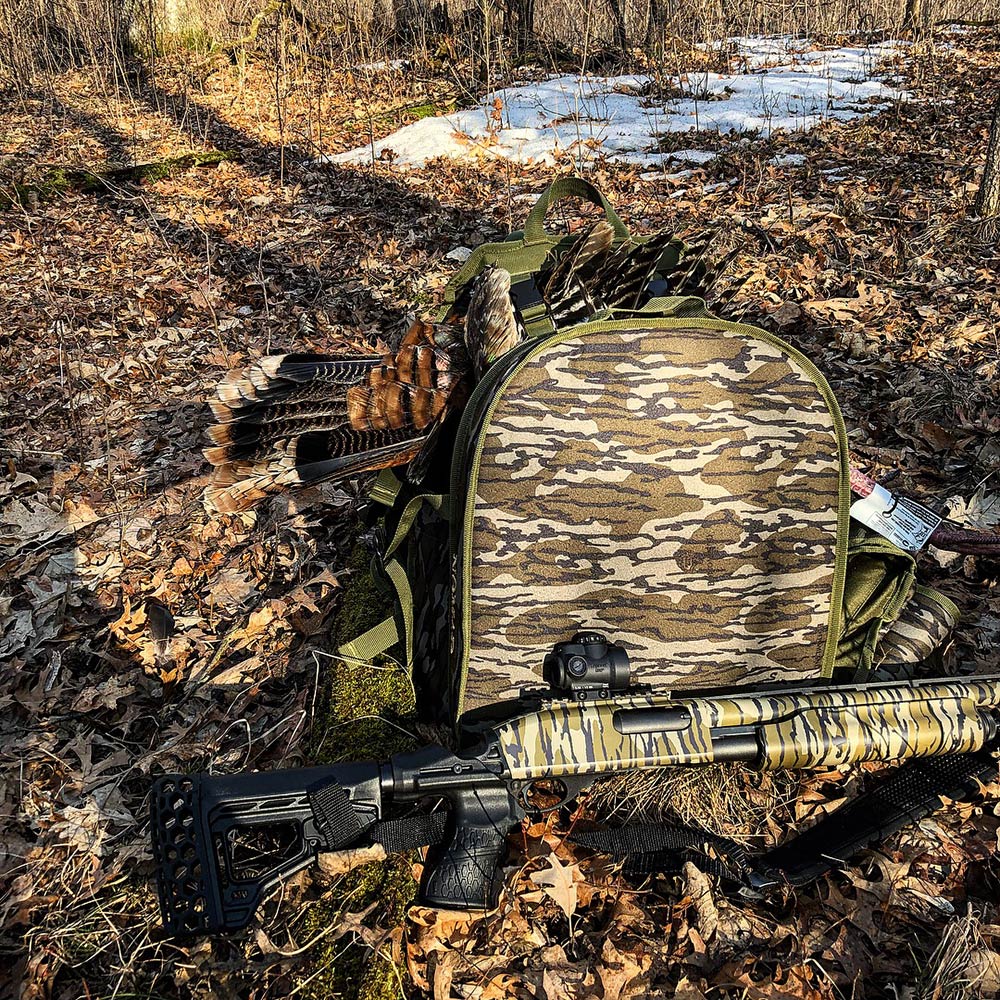 You Hunt the Same Times As Everybody Else

Mid-morning and the afternoon can be great times to hunt (where legal).

Everyone likes to hunt at sunrise. But on public-land spots that see hunting pressure, the afternoon can be better simply because there are fewer hunters in the woods (obviously this tactic only works in states that allow afternoon hunts). Most guys give up between 10 am and noon to get to work, eat lunch, or take a nap. A great tactic is to go out on a warm afternoon to strike a lonely tom. A bird that eagerly gobbles during the middle of the day will likely be one of the easiest turkeys you’ve ever killed. Be sure you’ve picked out a place to set up quickly before hitting a call to locate a bird. And if the afternoon hunt doesn’t pan out, stay until sunset to roost him for the next day. Which, brings us to the next point… 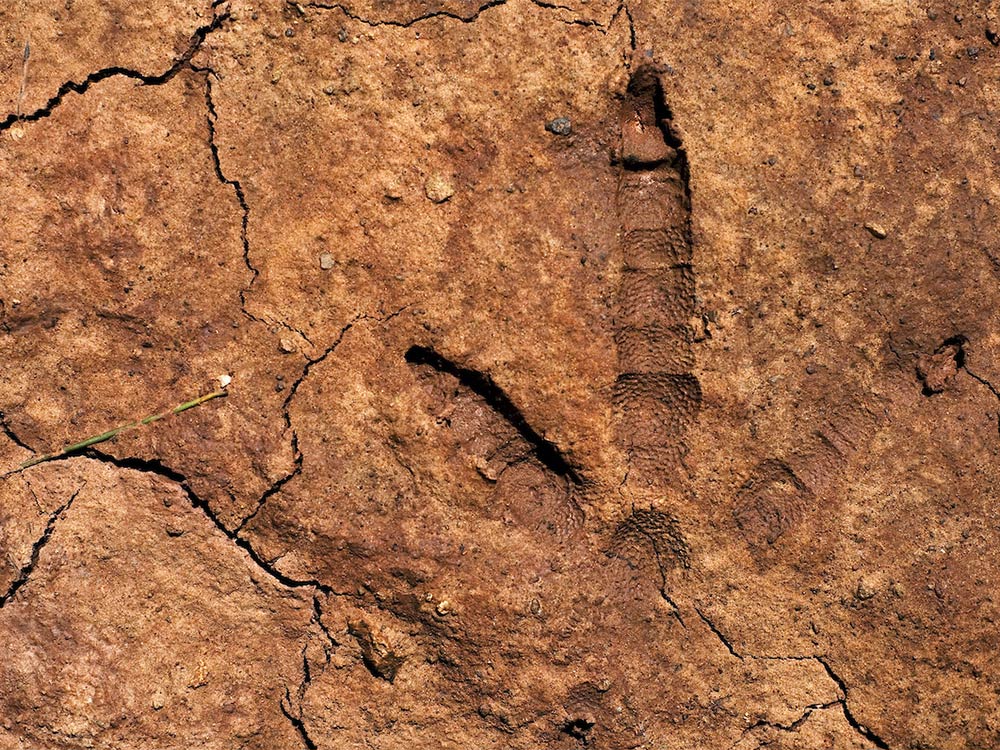 You’re Not Scouting During the Season

Even if birds aren’t gobbling, tracks, scratching, and scat will give away their haunts.

The most successful waterfowlers spend way more time scouting than they do hunting. When they do commit to a hunt, it’s usually a great shoot. Take a page from their book and sacrifice a couple days of hunting to relocate birds. This is especially useful during midseason when those birds you scouted before the season have been bumped, buggered, or killed. Taking an early-morning drive and hitting as many locations as possible will help you find fresh birds and new spots. 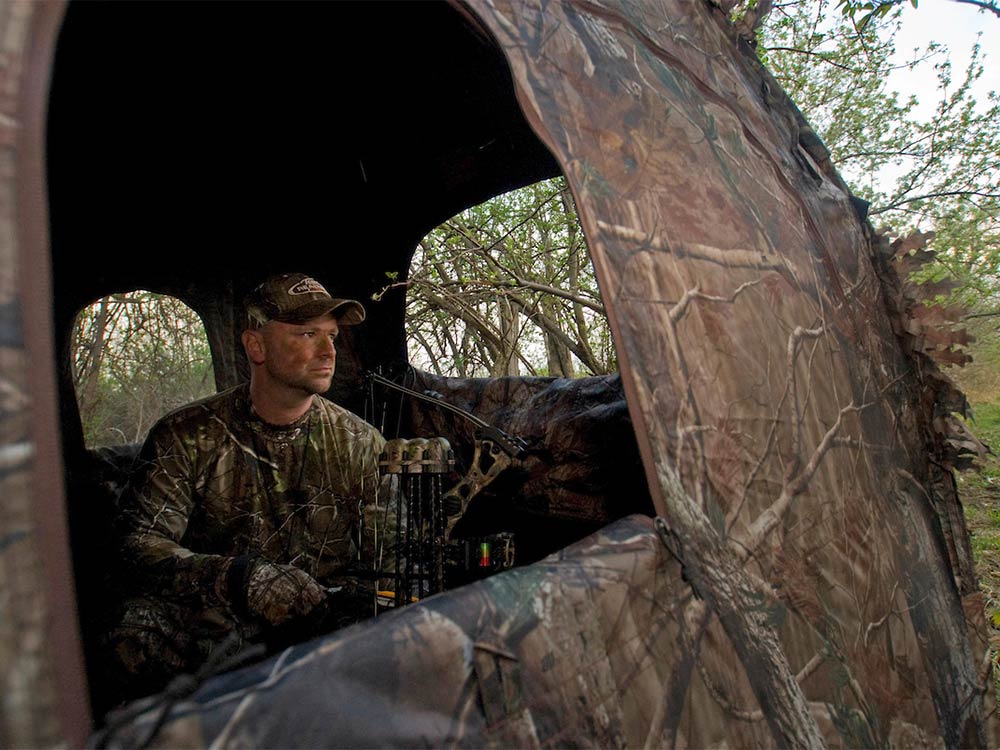 Don’t burn your whole season waiting in a ground blind.

I’m amazed at how many hunters will pick a field edge to hunt for the season and just wait… and wait. There’s no doubt that sitting a field edge with decoys can be an effective way to kill turkeys. But on public land, the dynamics are always changing. Your go-to spot can get blown out without you even knowing it. So instead of stubbornly waiting in an area that used to have turkeys, change as the conditions change. Try new, out-of-the-way spots. One of my best public-land spots is a hardwood peninsula that juts out into a big cattail marsh. Gobblers roost in the hardwoods and can’t get off the peninsula without walking by me. The best thing about it is I’ve never seen anyone else hunt it. But, I never would have found that spot if I hadn’t left a more popular piece of public ground to search for new birds. 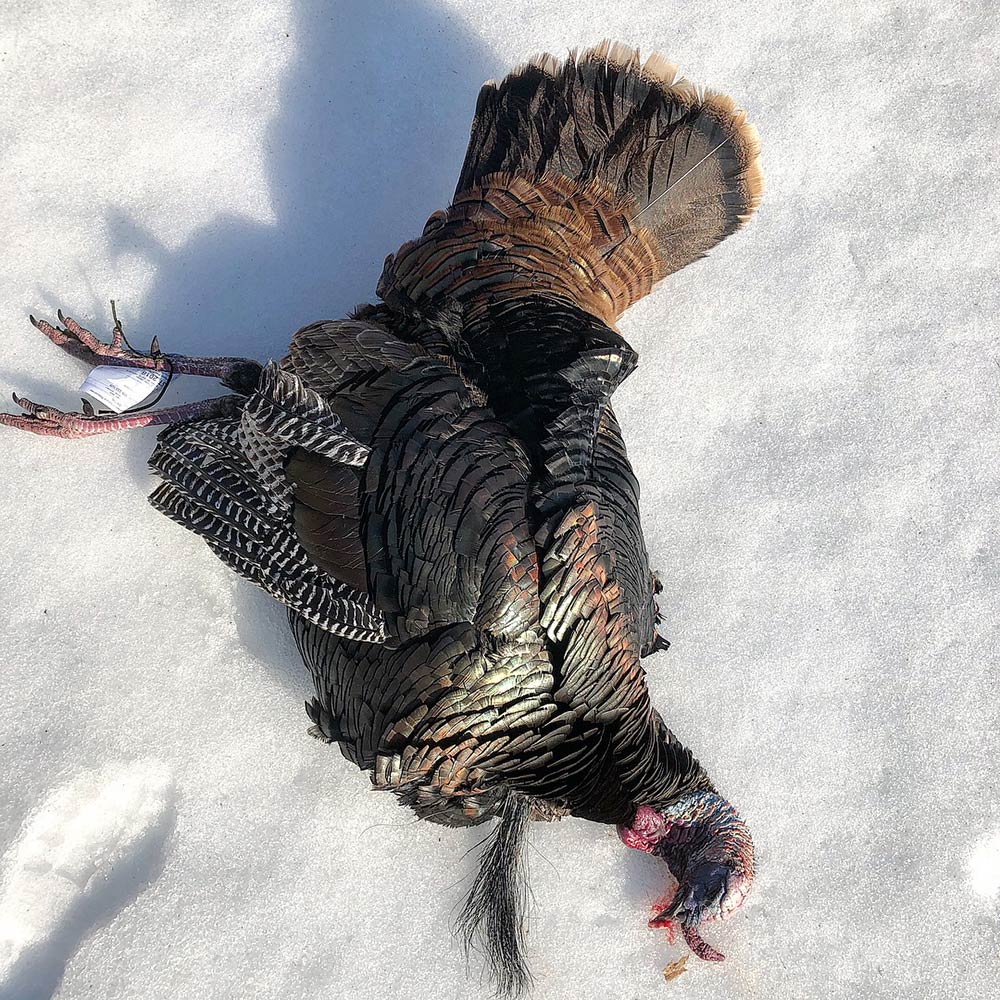 You’re Calling Way Too Much

This early-season gobbler came charging in to some light yelps on a slate call.

Most of the guys I hear in the public turkey woods are not great callers (full disclosure: I’m no Will Primos, either). Luckily, you don’t have to be a great caller to kill a whole bunch of turkeys. If you know you’re not an expert caller (or even if you flat out suck), you can be successful by setting up where the tom wants to be and then giving him some light yelps and clucks. If he likes it, give him a little more. If he doesn’t respond with enthusiasm, then you should stop calling. Curiosity might draw him, but a whole run of crappy calling won’t. When it comes to bad turkey calling, a little goes a long way. If you can’t make a diaphragm call sound like a real hen, then for God’s sake leave it in the truck. A slate call will draw the bird in, and a simple push-button call (which you can run with your shotgun shouldered) will pull him those last few yards into shooting range. 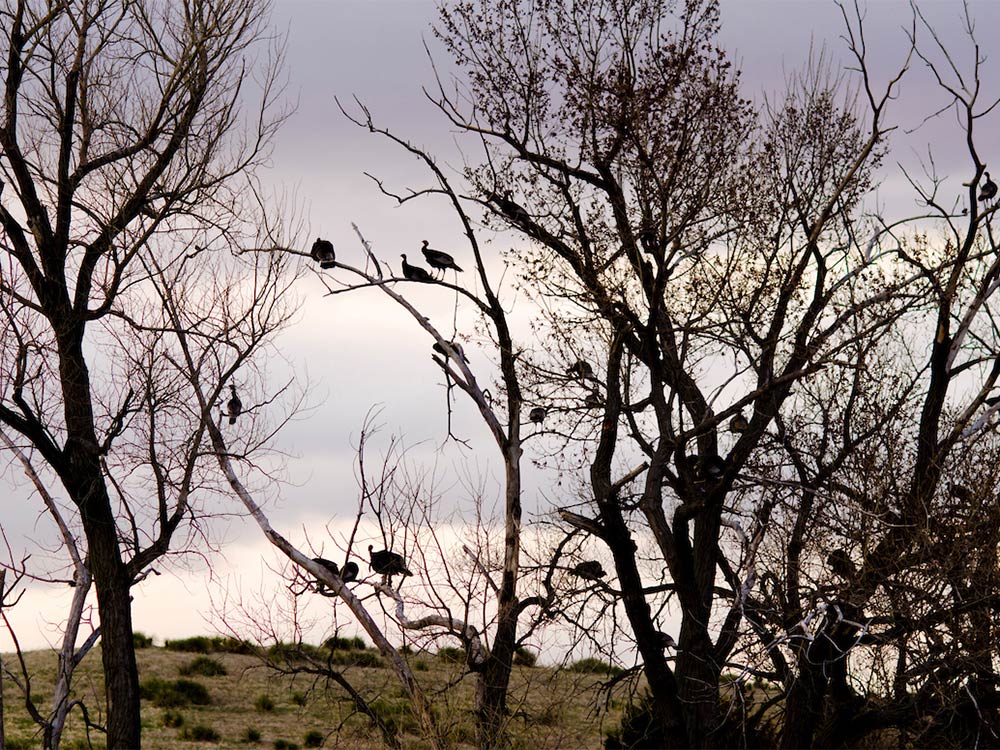 Sneak into roosting areas as quietly as possible.

Public land turkeys get blown off roosts. By the second week of the season they know that headlamps and boots tromping through the leaves mean trouble. Sometimes, birds that hear the noisy approach of a hunter won’t blow off the roost right away, but they’ll go quiet. Then they’ll fly down and slip away to safety. Often times the hunter thinks the birds were henned-up and uncooperative. In reality, they were spooked. So on calm, quiet spring mornings, sneak in like a ninja when you plan to hunt near a roost. Leave earlier than you need to, so you don’t have to rush. Leave the blind at home and go as light as possible, so your extraneous gear won’t get caught up in the brush and make a racket. Turn your headlamp off when you start getting close to the spot. Tiptoe to within 100 yards of the roost and there’s a good chance the gobbler will fly down right in your lap. Legendary turkey hunter Ray Eye once told me a story about a tom in Missouri that he and his buddies just couldn’t seem to kill. After a week of blown attempts, Ray decided to sneak in on the roosted bird at zero dark thirty. He took off his boots when he got close and crept toward the roost tree in his socks, guided only by the light of the moon. Then he waited silently for hours until sunrise. Eventually, the tom flew down and Ray shot him when his feet touched the ground. I’m sure parts of that story have been stretched over the years, but the lesson is a good one: be quiet and get there early. 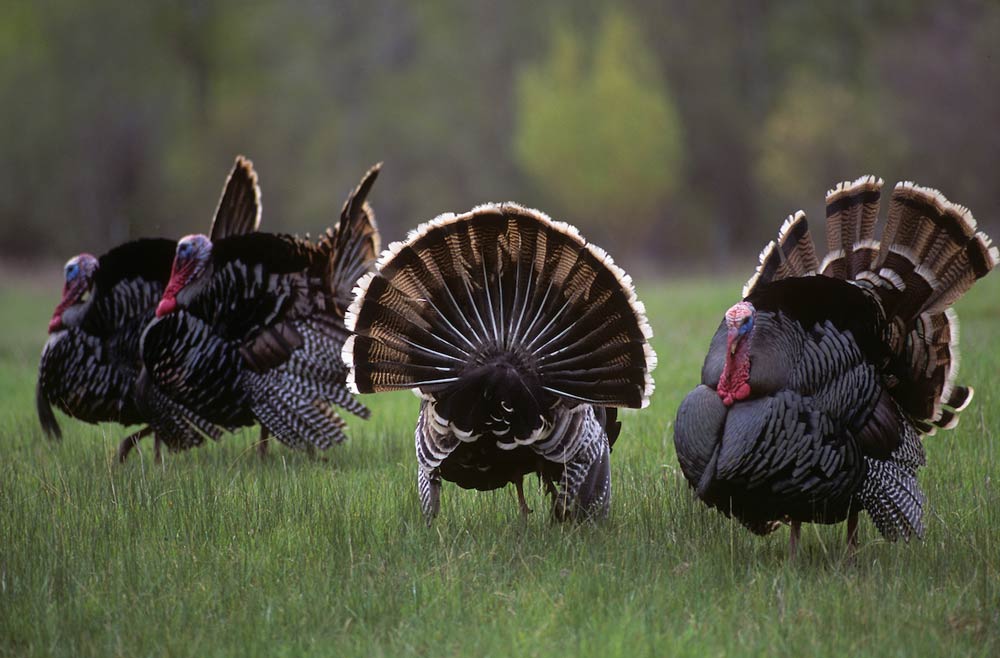 You Thought it Was Going to Be Easy

Unfortunately, not every green field is full of strutters.

Sometimes it seems like everybody and their 10-year-old kid has already got their bird. Plus, with all the Facebook and Youtube videos of suicidal toms charging in to decoys, it can be easy to forget that turkey hunting can actually get pretty challenging. So don’t get discouraged when your first couple outings don’t go as planned. Keep changing up your tactics and enjoy those early mornings and late nights, because it’s only a matter of time before that old tom slinks in to range.

How to Get Permission on Private Land

Sometimes it’s nice to have a go-to private land spot if you’re striking out on public ground. Farmers are often more willing to grant permission for turkey hunting than they are for deer hunting, which is a blessing and a curse—because there’s a good chance somebody else already has permission to hunt the place. So start your private land search the same way you’d start your public land search: use a digital mapping app to locate likely turkey habitat that’s off the beaten path. Look for hardwood ridges near agricultural fields, river bottoms that might hold good roost trees, and timber points that jut out into corn or soybean fields. Mark all your potential new hunting locations and make sure to record the landowners’ addresses.

Then spend a couple afternoons in late winter knocking on doors. Don’t show up during dinner time or on Sunday morning when folks might be getting ready for church. Be friendly and upfront. Tell the landowner you’d like to hunt the place for spring turkeys only, you won’t rut up the fields, you won’t hunt near the cattle, and you won’t have a whole crew of other guys hunting with you. If the landowner declines (no matter what the reason), don’t argue or try to persuade him or her, just say “thanks for the time” and be on your way. Remember: Farmers don’t owe you anything. They’d be letting you hunt their land and not really getting anything in return. Also, local landowners talk to each other. You can earn a reputation in an area quickly, for better or worse.

If you cover enough ground and knock on enough doors, you just might land your own private hunting spot to supplement all your public land hunting.