How to Hunt Gobblers That Go Ghost 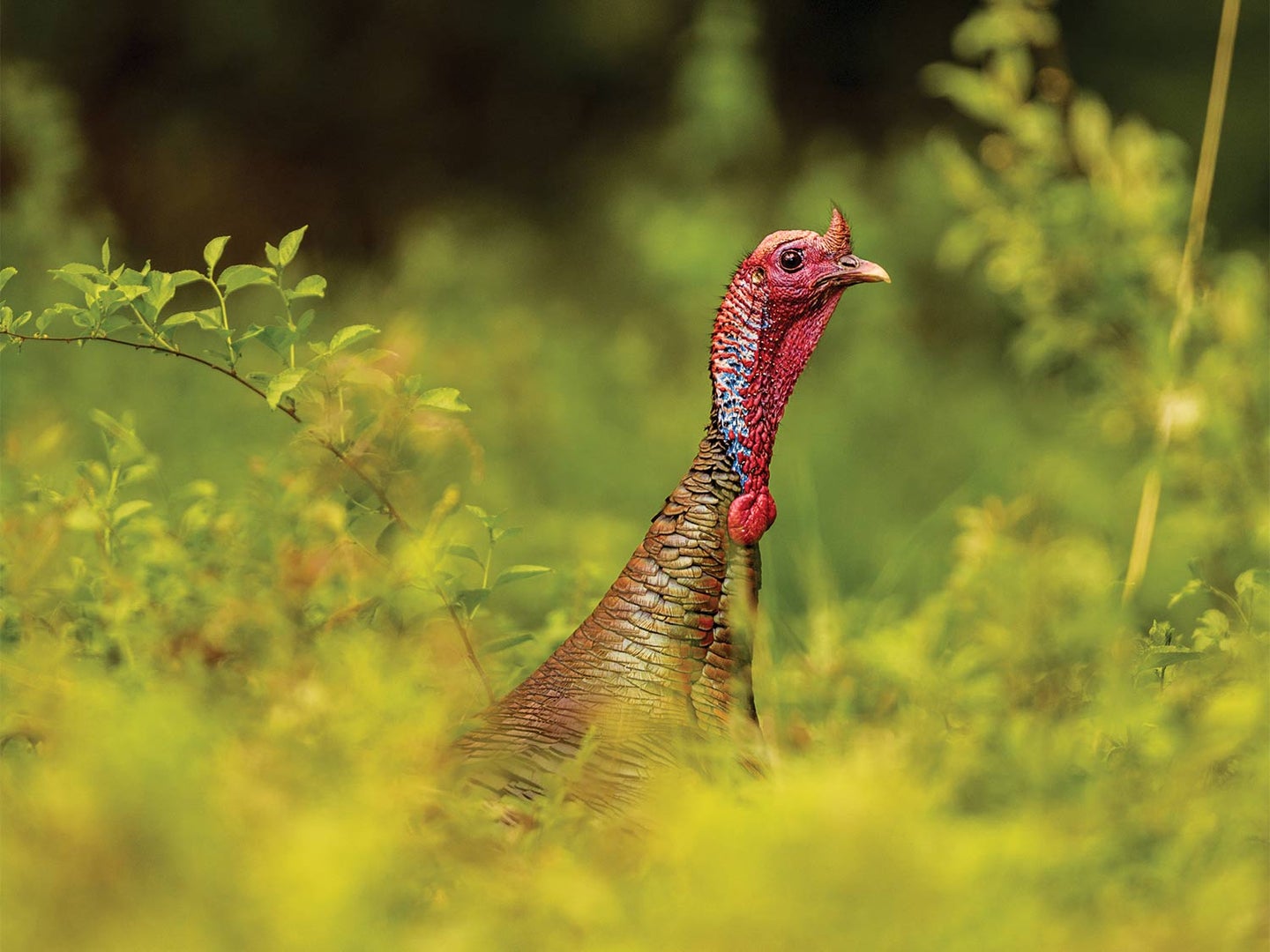 Late-season gobblers get spooky, so keeping calls light is the smart approach to lure in an old tom. Lance Krueger
SHARE

Every turkey hunt is a head trip as much as it’s a pursuit of beard and spur. Your elation lights up the dawn when a wild tom on a distant limb gobbles in reaction to your bogus owl hoot or coyote howl. As long as he keeps responding, your confidence soars like a triple jumper.

It’s natural to keep stoking the feedback loop, provoking that gobble and tickling the pleasure center of your brain. But at some point, you overdo it, and your distant correspondent goes silent. No matter how provocative your howls or how seductive your yelps, the gobbler is nowhere to be heard. As your confidence plummets, you start overthinking things, guessing that your coyote howl was a little too shrill or your owl call a little too hooty. Or that you simply haven’t called enough.

You are now on the high sea of indecision, drifting between shutting up entirely and calling just a little more, or maybe a lot more—anything to coax just one more gobble. A response will not only confirm the turkey’s location, but also redeem your sinking self-esteem.

This is when most of us start to apply human motivations to a wild turkey. He must not have liked what he heard, you think. Or you assume the alternative, that turkeys don’t follow any prompt at all. “They’re just turkeys being turkeys,” you say to no one in particular.

Mike Chamberlain at the University of Georgia, however, can tell you precisely why that gobbler shut up. He can tell you how the turkey reacted as you ramped up your calling, and he has a good idea where the gobbler moved in response to your presence in the woods.

Chamberlain is director of the Turkey Lab, a research center that, with help from state wildlife agencies across the Southeast and dozens of graduate assistants, has studied everything from turkey food and nest preferences to predation patterns. Chamberlain’s crew is finishing a multiyear study that looks at how GPS-wearing turkeys respond to hunting pressure, from both two- and four-legged predators. The study also considers gobbling patterns and all the ways that gobbling (or the lack of it) can trip up hunters in the spring woods.

The Trees Have Ears

If you have ever been the unwitting victim of a shutdown gobbler, then Chamberlain’s work should interest you. His study is determining the science behind when, where, and why turkeys gobble. The findings will make you a smarter, and possibly more successful, hunter.

“Based on our research, we’re finding that these birds don’t gobble the way we thought historically,” says Chamberlain, whose study follows GPS-collared gobblers and uses microphones attached to trees to record vocalizations. It’s important to note that the research centers on the Eastern subspecies of turkeys, and that it probably has implications for both the Osceola and Rio Grande subspecies but not Merriam’s, which occupy different habitats. “We don’t see defined peaks of gobbling, but mainly, we’re finding that vocalization is heavily confounded by hunting activity. Birds that are getting hunted, especially on public land with unlimited hunting access and unlimited hunter numbers, alter their gobbling activity substantially, to the point that they may cease gobbling well before the end of the season.”

That dynamic helps explain why the woods reverberate with gobbles on opening morning, and then less so as the first weeks of the season progress. As a secondary point, wind and rain also suppress gobbling, although to a lesser degree than other factors.

Chamberlain’s research, which enlisted help from Georgia’s Wildlife Resources Division, considered the effects of weather, season, predation, and even atmospheric pressure on gobbling, but early results suggest that nothing impacts a wild tom’s vocal displays quite like human hunting.

“Hunting trumps everything,” Chamberlain says. “It makes sense. You’re losing the most vocal birds to mortality—they’re the easiest for hunters to kill—and the remaining birds are adapting a strategy that doesn’t involve being vocal, since being vocal attracts attention, resulting in either being spooked or being killed.”

“State agencies have timed their openers to coincide with peak gobbling for good reason,” Chamberlain notes. “The No. 1 determinant of hunter satisfaction is hearing gobbling. We’ll see an increasing ramp-up of gobbling activity toward the opener, then there’s a precipitous decline in gobbling after the opener. On some sites, the activity doesn’t go to zero; some birds continue to gobble. On other sites, activity does go to zero. But as soon as hunting stops, birds resume gobbling. Now, there could be fewer birds on some sites, or more hunters on other sites. Those are variables we can’t control for, but we can say across all our sites that when hunting starts, gobbling declines.”

Chamberlain notes that not all the birds get shot by hunters. Some gobblers simply leave and resume their activity on nearby properties with less hunting pressure. Others go silent and employ other ways to find and breed hens. It’s these stealth gobblers, still on public land and available to hunters, that have the most to teach us.

Pipe Down and Get Sneaky

In order to kill silent spring toms, it’s useful to understand a bit about why turkeys gobble. It’s not all sex and dominance.

“Think of a flock of turkeys as an exploded lek,” Chamberlain says. “Prairie grouse have centralized leks where all the males go to display, and the females pick a dominant bird. They breed and they disperse. With turkeys, you have pockets of birds moving across the landscape. Hens roam around, find that exploded lek, pick a dominant gobbler, and breed. Gobbling is a way to attract attention from hens, but also to maintain contact between exploded leks. You see this with chain gobbling. You hear one group of toms blow up on the roost, and they cause other gobblers on distant ridges to sound off. They’re trying to attract hens, but also to maintain relationships between these dispersed leks.”

But if hens already know where dominant gobblers are located, then gobbling is an unnecessary—and highly risky—­behavior when hunters are present.

“If you are a gobbler that already knows where the hens are, then why not shut up and go there?” Chamberlain says. “This actually squares with what a lot of hunters say: ‘The tom gobbled a time or two in the tree and then shut up.’ That makes sense based on what we’ve found. It’s a bad idea to advertise yourself needlessly.”

Chamberlain’s advice to hunters: Be patient.

“Understand that these birds are potentially changing their strategies once hunting starts,” he says. “But don’t give up on the woods. The bird is still there, and if you know that, then change your tactics. Try to be more patient. Try to identify areas where you know hens are going, and try to get there before the gobbler does.”

This is where preseason scouting pays dividends. Find areas where gobblers typically strut and the travel routes that take them there, and you can set up and ambush a bird without scratching out a single chirp or yelp. That’s Chamberlain’s main point.

“Above all, don’t overcall in the expectation that you’ll get a quiet bird to suddenly light up. That’s a bird that recognizes you are a risk and has either gone silent or left the area. No amount of calling is going to get him to respond.”

Killers in the Dark

Mike Chamberlain’s study looked at how pressure from coyotes and humans affects gobbling and turkey distribution. One surprising source of gobbler predation: owls.

“Almost in every research site we have in the Southeast, we’ve seen predation by great horned owls,” Chamberlain says. “I think this is as important as anything outside of human predation.

“Owls seem to select gobblers, not hens. Based on a very distinctive kill pattern, we think owls are targeting toms on the roost. We tend to lose numbers of toms mainly in March, just when gobbling ramps up, and it’s clear these gobblers were [attacked on] the roost and killed on the ground. The only plausible scenario we can construct is that a gob­bler sounds off on a tree limb, an owl homes in on the gobble, swoops in, and takes the tom in the midst of his display. Most of these gobblers are decapitated. Owls are very effective predators of turkeys. Almost everywhere we have a lot of owls and marked birds, we lose many toms.”