Video: Colorado Man Wakes Up to Discover a Mountain Lion Eating an Elk on His Front Porch

A mountain lion takes down an elk in a Glenwood Canyon backyard, much to the homeowner’s surprise 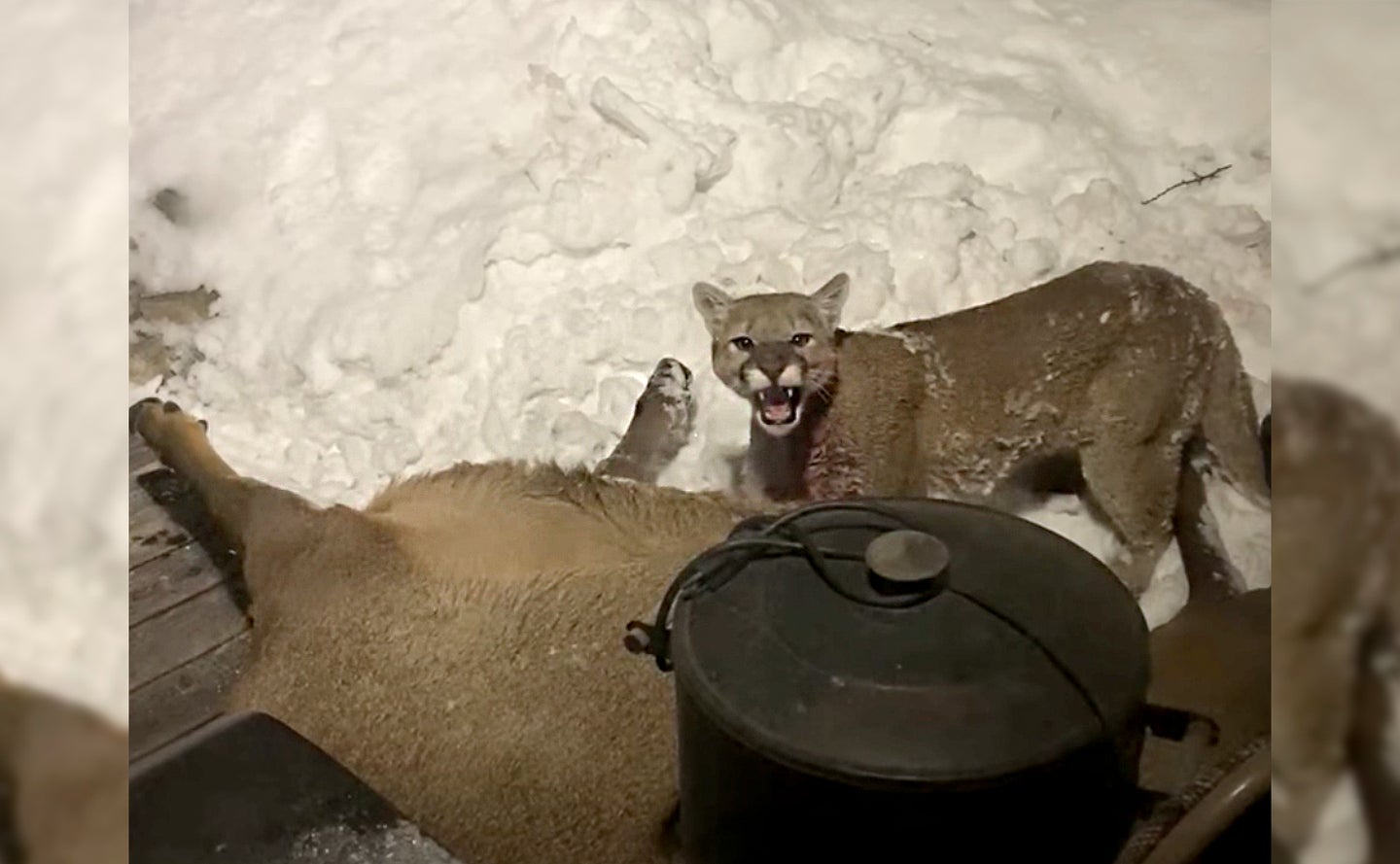 A Glenwood Springs resident was startled to find a dying elk on his front porch, and even more startled when he discovered a mountain lion had killed it. Courtesy Charles Zelenka
SHARE

Charles Zelenka has lived in his Colorado home for 17 years, during which he’s watched deer, bears, elk, bighorn sheep, and even the occasional moose stroll through his half-acre yard. That’s why, when he woke up around 2 a.m. on Jan. 4 to a loud banging noise outside his Glenwood Springs house, he figured it was the usual bears trying to break into his bear-proof dumpster.

“That’s where the bumping and noise was coming from,” Zelenka told Outdoor Life. He dragged himself out of bed to look through the bathroom window, but couldn’t see anything in the darkness outside. His yellow Lab, Sunny, was curled up on the bed and didn’t seem perturbed. So Zelenka, hoping the noise would stop soon, went back to sleep. “Next thing I know, I heard some more thumping. I was like, alright, I have to check this out.”

So Zelenka descended the stairs and switched on the outdoor lights, peering out the window of his front door.

“I was like, Holy crap, there’s an elk on my front porch! I could see it kicking its front legs. I was like, What the hell happened? I couldn’t figure it out.”

Perhaps the cow had been hit by a car and made its way onto his porch to die. Interstate 70, which runs through Glenwood Canyon, lies less than 200 feet from Zelenka’s yard.

The elk stopped kicking, and Zelenka crossed into the downstairs bathroom for a better look. He could still see the elk through the window, but this new view was somewhat obscured by a grill and a smoker.

“I was just about ready to turn and go out the door, and a mountain lion popped up from underneath this thing,” Zelenka says. “So I grabbed my phone—I’m in my skivvies, I’ve just gotten out of bed—and start recording.”

The video, which Zelenka posted to Facebook where it has since received more than 23,000 shares and nearly 5,000 comments, shows a snow-covered cougar with bloody fur just outside the window. The elk is lying on its side, her front half collapsed on the porch floorboards with her hindquarters in the snow and her head and neck contorted awkwardly underneath her chest. The big cat is watching its back trail, possibly confused by the sudden flood of light, then hisses when it notices Zelenka filming from the window. It hisses again, then turns and slowly pads away into the yard, leaving bloody paw prints in the snow before disappearing into the trees.

Zelenka called the local dispatch, who told him to stay safe. After the cat had disappeared into the woods, Zelenka grabbed his air rifle and stepped onto the porch for a quick look at the elk. Then he went back to bed. This time, he had trouble falling asleep.

“It just caught me off guard,” Zelenka says of that initial encounter. “I see a lot of animals. I have lots of bighorn sheep, elk, deer, bear—they’re all in my yard. You just don’t see that every day. It was all in the timing, too. It was a rush.”

The next morning, Zelenka got a better look at the elk and tried to piece together what happened. As best as he can tell from the trail in the snow, the fight between the cougar and the elk began on the ridge above his house before the two came tearing into his yard. All the noise in the night made more sense when he saw the tracks, and there was even a small hole kicked in his house. A chunk of siding was missing and there was fur and blood in the gap, and more hair snagged in a ladder lashed to the wall. The elk had flesh missing from her inner hindquarter, and the cat had clearly eaten a few bites from her belly. Zelenka took note of all the sign, but tried not to walk through any of it.

“I didn’t really want to disturb the area too much till the DOW came, because you just never know how law enforcement approaches this thing,” Zelenka says, noting that some Facebook commenters had accused him of shooting the elk.

When Colorado Division of Parks and Wildlife officer did arrive that morning, the officer wound a cable around the elk, dragged it off Zelenka’s porch, and winched it into his pickup. He hoped to get the meat processed for donation. Before departing, the officer told Zelenka he could expect to see the lion again over the next few days, as it would return with plans to feed on the kill.

“I used to hunt but I’m not necessarily a big hunter now. So I just went out there and tried to scent the area with, you know, urine,” Zelenka says with a laugh. “I just want to disperse him and let him know I’m here, but I’m sure he’s still right up there. And that’s what the DOW [officer] said too, he said, ‘He’s living up on the ridge somewhere behind your house—probably looking at us right now—so be careful.”

And Zelenka has been careful this week. He escorts his dog outside, bringing a gun and a bright flashlight at night. Although he’s never seen a mountain lion in his yard before this encounter, Zelenka says he’s found two mountain lion kills—both deer—over the years. One had been 100 feet up the hill from his house, and another 300 feet away. A few months ago, his neighbor’s daughter took her chihuahua, Sasquatch, outside around midnight.

In the days since the encounter, security cameras have captured footage of the big cat crossing the deck above his driveway and walking across his front porch.

In Dec 2017 and 2018, Colorado Parks and Wildlife received reports of multiple sets of lion tracks in Glenwood Springs yards, and includes reports of one dog that was attacked and lived, and another that was attacked in killed. A subsequent report indicated a man walking his dog had seen a lion stalking them behind bushes in a yard. Over the course of nine days, five lions were trapped in the subdivision in question.

Zelenka lives in the Glenwood Special Management Area, a 1,830-square-mile swath of Colorado that requires additional mountain lion management. It includes towns like Aspen, Carbondale, Eagle, and Vail. According to the state’s Western Slope Lion Management Plan, which was implemented in September 2020, “…near Glenwood Springs, human safety and social tolerance levels is a higher management priority than lion abundance. This is balanced with the overarching goal at the much larger Northwest Regional scale, of maintaining a stable lion population.”

The statewide mountain lion population is estimated between 3,000 and 7,000 animals, according to an undated page on the Colorado Division of Parks and Wildlife website. During the 2020-21 lion seasons, 526 mountain lions were harvested statewide, for a 20 percent success rate among 2,672 total hunters. Fourteen of those big cats were taken in the Glenwood Special Management Area.