How'd you like to hunt every day and get paid for it? 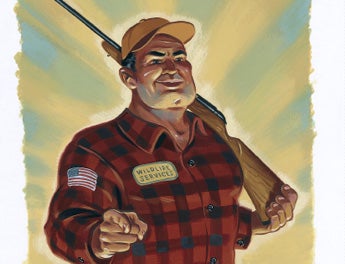 Help Wanted: Looking for experienced, well-rounded woodsmen for outdoor employment. Expert marksmanship, hunting and trapping skills and knowledge of wildlife a must. Competitive salary, paid holidays and complete benefits package. Sound like a dream? Then maybe a gig as a “wildlife technician” for the U.S. Department of Agriculture’s Wildlife Services Division is for you.

They used to be called “government trappers.” Hired guns really, they had blanket authorization to use traps, poison, firepower-pretty much any means necessary-to rid the West of livestock- and game-killing predators. These days technicians work in all 50 states, anywhere wildlife of any kind becomes a nuisance, on projects that range in scope from “hazing” cormorant nesting sights in northern New York to sniping livestock-killing wolves and coyotes from helicopters and low-flying planes in the West.

Dan Parry, a USDA spokesman who handles the sometimes prickly job of public relations for Wildlife Services, stresses that they make every attempt to control nuisance wildlife with non-lethal means before utilizing traps and firepower.

At New York’s JFK airport, they first tried noise cannons, sirens and even trained falcons to defend the airspace against tens of thousands of kamikaze gulls and geese (the FAA reports a yearly average of 50,000 plane/wildlife collisions) before technicians were handed a small arsenal of semi-automatic Benelli Super Black Eagles and a truckload of steel shot. For the past eight years (despite attempts by animal-rights activists, who initially tried harassing the hunts from boats in Jamaica Bay), it’s not uncommon to down 100 gulls a day.

In the sunflower fields of North and South Dakota, wildlife technicians are currently working to cull an inordinate number of crop-raiding blackbirds.

In Maryland’s Blackwater Wildlife Refuge, a team of government trappers have put in 40-hour weeks for the last two years in a multimillion-dollar effort to eliminate the invasive, non- native nutria. Boats, motors, traps, stainless Ruger 10/22 rifles and Mark II pistols are all standard issue there. In Pennsylvania’s Gettysburg National Park, sharpshooters worked at night with spotlights and suppressed rifles to quietly curb the overpopulation of whitetail deer. Likewise on Western cattle ranches, where vultures have adopted a grisly propensity for swooping down on birthing cows to feed on newborn calves fresh out of the womb.

Since this is a government job, a military background or a degree in one of the wildlife sciences will give an applicant a leg up in the hiring process. But applicants without a record of public service or a college diploma can still start out on some Wildlife Services programs making $28,000 a year.

The USDA is looking to reduce the number of nuisance geese, mute swans and cormorant along the Great Lakes and the Atlantic seaboard. Mute swans are taking over nesting habitat used by waterfowl and other shorebird species.

Still, an initiative to use lethal means to kill off troublesome swans recently brought a lawsuit against the government by members of a group called Save Our Swans (S.O.S). One side wants to keep the swans protected; the other will likely soon find out what kind of load is required to knock down a 25-pound bird with a wingspan of over 7 feet.