Confessions of a Sharpshooter: How a Deer Cull Actually Works

The last place you would expect to see an animal rights group is protesting alongside a hunters’ rights group, but... 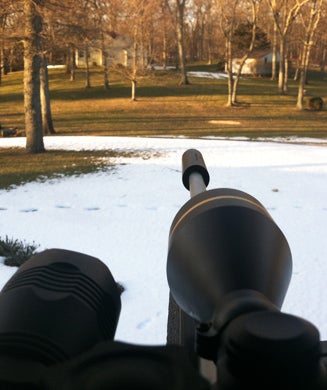 The last place you would expect to see an animal rights group is protesting alongside a hunters’ rights group, but that’s exactly what is happening on Long Island’s East End. When town, state, and federal authorities announced the plan to remove as many as 3,000 deer from the local population, it polarized the community–and created unlikely allies. This is the first landscape-level cull in the region, and it has certainly garnered its share of opposition.

Local sportsmen were outraged over the use of hired guns to manage the local whitetail population. As with a lot of areas, access for hunters is extremely limited on Long Island. Now taxpayers are going to fund a service that hunters would happily provide for free?

Not surprisingly, local animal rights groups were equally opposed. Their protests and petitions started almost immediately. Senators were called, local officials were inundated with requests to stop the impending actions. Many questioned the biological implications of removing so many deer, as they are a keystone species. Mostly, though, the animal rights groups just didn’t want to see that many deer die.

But before you applaud or admonish a deer cull, it’s important to first know how these things actually work. That’s where I come in. As a wildlife specialist for USDA Wildlife Services, I participated in three deer culls over five years.
**
Clearing the Runway**
It was unseasonably cool for September in the Hamptons. I was in the bed of an F-150 that was slowly creeping around the perimeter of the Francis S. Gabreski Air National Guard Base. On this particular night they were practicing drop-and-goes, the military craft rapidly descending then ascending in the airspace right alongside us. Although they weren’t actually releasing cargo, I couldn’t help but look for parachutes deploying in the darkness. Next to me was my spotter, a forward-looking infrared device in one hand and a spotlight in the other. I steadied a suppressed bolt-action .243 on sand bags atop the roof of the vehicle.

As we rounded the corner, my spotter jabbed me with his elbow as he simultaneously tapped on the roof. The driver gently applied the brakes, stopping us about 75 yards from a doe. I slowly lowered my cheek onto the comb as the spotter readied the light. When I had the rifle pointed in the general direction of the animal, I signaled the spotter to turn on the light. He was careful to avoid shining it directly into the deer’s eyes, as that would surely spook her into the next county. Even if he successfully hit her with just edge of the light’s halo, I would have just seconds to steady the reticle and squeeze the trigger.

I’d like to tell you the stars aligned, and I pulled off a flawless shot. But the doe took off the second the light was switched on. The base issues a large number of nuisance permits to the public on a first-come, first-served basis. There is substantial hunting pressure, and the deer herd’s behavior reflected it. We harvested three deer that night, and took just 14 deer total after a full week’s work. All of the deer were field dressed on site–an activity that required Tyvek suits and masking tape because of the incredible number of ticks–and the carcasses were taken to a local game processor to be butchered and donated to Hunters for the Hungry.

Anatomy of a Cull
Most of the activity takes place at night, when the deer are most active and human activity is typically low. While we would try to take advantage of the deer movement often associated with the setting sun, we had the most success in the dead of the night.

There are two ways in which deer control operations are typically executed. The first is mobile, where, as illustrated above, a team or multiple teams move in vehicles through an area. The second method is stationary, where shooters set up over bait placed in a few key areas in an effort to concentrate deer. The environment and terrain dictate the culling method used. Pockets of densely populated suburbs typically don’t lend themselves to mobile operations, but farmland and other open spaces often do.

One of the operations I participated involved baiting the deer to stand sites. These stands are usually not traditional deer stands. I have spent the night in a child’s tree house. Decks are a preferred location, as their elevation makes for safer shots. All locations were scouted weeks beforehand, and trail cameras were used to verify deer travel routes. We set out piles of corn and maintained them for about three weeks before the first shot was fired.

Anyone who lives in a state that permits baiting for deer will tell you it’s not the slam dunk that some would have you believe. Yearlings would be all over our bait piles, but it was difficult to get the older, wiser deer to commit on a regular basis. Those deer would typically hit a pile once and disappear, if we saw them on the cameras at all. In areas with a lot of ornamental horticulture, deer have a smorgasbord of dining options, which makes baiting them even trickier. Once a cull started we would work consecutive nights for about a week, but would see diminishing returns after the first night. Larger landscape-level events, like those seen around Chicago and in parts of Pennsylvania, might last for a month or longer.

It’s unfortunate that suppressed firearms aren’t more widely accepted across the country. Luckily, we were able to utilize them during culls, even though New York doesn’t permit their use by the general public.

We used .243-caliber rifles built off of Remington and Savage bolt actions. They were sent out to a performance shop for a trigger job, and to have the barrels threaded to accept the cans. These were minute-of-angle machines, but they weren’t perfect. Because of the suppressors, they were prone to overheating. This never affected in-the-field performance, as we would only take a few shots at a time, but you noticed it at the range. After a few successive rounds, the shots would start to drift.

We used simple, handheld infrared units. They were temperamental at best, and the batteries were very sensitive to changes in temperature. It was pretty common to spend a night with a battery tucked in an armpit in an attempt to keep the unit working for the duration of the shoot. But they did provide a brilliant view of the nighttime surroundings.

We shot frangible rounds so that, in the improbable event of a ricochet, they would cause minimal damage to property. At first I had reservations about the lethality of such bullets, but the results spoke for themselves. Upon penetration, the rounds quickly broke apart and dumped all of their energy into the animals’ soft tissue. All shots were head or neck shots. I can’t recall a single instance of pass-through, and the devastation the bullets caused was truly amazing, often turning the entire skull to jelly.

As some of this work was conducted around active runways, we took every precaution to prevent a situation involving wounded animals. Even in suburban operations we would use the head/neck shot placement, as it was considered by the agency to be the most effective. Every possible precaution was taken to ensure a quick, clean kill.

Agencies like the USDA’s Wildlife Services exist and flourish in areas that hunting cannot be used as an effective management tool, for whatever reason. In the case of eastern Long Island, it is a combination of discharge laws, fears of lawsuits by landowners, and a culture that is growing away from its hunting roots.

But all hope is not lost in the Empire State. New York recently shortened the minimum distance for the discharge of bows in relation to a residence on Long Island from 500 feet to 150 feet, a move that will surely open up more shooting opportunities for hunters. At face value it would seem that government wildlife control agencies, hunters, and animal rights groups are all at odds, but in the end, they all want the same thing: a healthy, sustainable deer herd. Sometimes, a government deer cull is the only way to accomplish that.