Forget da' bulls and da' bears- what midwesterners are getting excited about these days are the fall runs of butt-kicking steelhead in Lake Michigan tributaries. 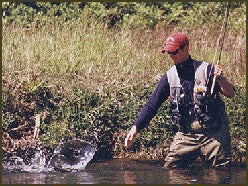 With all due respect to acrobatic smallmouths and bulldogging king salmon, no other fish swimming Lake Michigan or its feeder streams fights with more fury than a steelhead. Consider my first encounter with steelhead on a northern Indiana creek 15 years ago. The moment I set the hook, the fish shot heedlessly across the stream with such power it literally beached itself three feet onto the bank. Undaunted, the eight-pounder rolled back into the water, streaked to the other side and went airborne into a fallen tree lying in the creek just offshore.

Before I could mutter a few choice words, the steelhead jumped out of the gnarly brush the same way it entered and did so without tangling the line on a single branch! If that weren’t enough, the silver bullet raced toward me and zipped between my legs where I stood in knee-deep water. To this day, I don’t know how I landed that fish. It’s those kinds of bizarre experiences that steelhead anglers have come to expect during fall runs up Lake Michigan tributaries, especially where the animated Skamania strain has been planted. “I’ve had steelhead jump five feet out of the water and land in trees on the bank or literally knock themselves out by running into the side of the boat,” says Dustan Harley of the Ripple Guide Service (219-288-7453) in South Bend, Ind. “The fall steelhead is the best fish in the world.”

Go to the St. Joe
Harley guides flyfishermen on several Michigan tributaries in late fall but says the 63-mile stretch of winding St. Joseph River in southwestern Michigan and northern Indiana is the most productive and least pressured. “You’ll hook far more fish and see fewer people on the St. Joseph than you will on any Great Lakes stream,” he says. The St. Joseph receives substantial steelhead stockings from both Indiana and Michigan as part of a unique cooperative agreement created in the early 1980s. The $11 million project, funded by the Anadromous Fish Conservation Act, Sport Fish Restoration funds and state funds, enables migrating trout and salmon to pass over five dams between St. Joseph, Mich., and Mishawaka, Ind. The system was completed in 1992.

The funding also paid for a fish hatchery in Mishawaka, where Indiana produces most of the 200,000 steelhead it stocks in the St. Joseph annually. Considering that Michigan contributes 60,000 fish to the stocking effort, it’s clear why the St. Joseph has become a premier steelhead fishery.

“It’s not just one of the best in Michigan, but one of the best in the world,” insists southwestern Michigan fisheries supervisor Jim Dexter of the Department of Natural Resources. “We’re seeing annual returns between 35,000 and 50,000 fish. Nobody comes close to that.”

The St. Joseph also has a much better catch ratio than other Michigan waters. “We’re seeing between 14,000 and 19,000 steelhead taken each year on the St. Joseph and another 8,000 to 17,000 caught and released,” says Indiana Department of Natural Resources biologist Neil Ledet.

Of course, not all the fish come at once. Most of Indiana’s fish are the Skamania strain, which begins migrating from Lake Michigan into tributaries during midsummer. However, because of warm river temperatures, most of the fish don’t make it to Indiana’s 16-mile section until early fall.

Michigan and Indiana also stock the Manistee strain, a winter-run fish that starts to funnel into the St. Joseph in October and peaks in March. The Skamania and Manistee strains stay in the river until spawning is completed in early spring. Although there is some natural reproduction, the fishery could not be sustained without hatchery support.

Water temperature controls the run, with the Skamania moving in when river temperatures dip below 70 degrees and the Manistee steelies heading upriver when the water temperature drops into the 50s. Unseasonably warm falls can stall the fish in the lower riveer, but a cold spell or lingering rainy weather can lure them to the upper river overnight. The best action in the lower river occurs around Berrien Springs, Mich. For fishing reports and guide information, contact Shamrock Park (616-473-5691).

Top Tactics and Essential Gear
Fall steelhead prefer swirling current along gravel bars and deep channels, which are abundant in the St. Joseph.

Anglers do well fishing near the fast water at all of the dams, but the best fishing occurs in the holes downstream from gravel flats when the salmon are spawning. Fall steelhead love salmon eggs that are free-floating in the current; anglers will drift spawn clusters, colorful in-line spinners and night crawlers to the steelhead that are feeding below the bedding salmon. Flyfishermen like Egg-Sucking Leeches and other leech patterns during this period, and chartreuse or orange Woolly Buggers later. Sinking-tip lines are preferred for the deeper stretches, teamed with 8- or 9-weight outfits.

Use medium- or medium/light-action rods eight feet or longer in either spinning or bait-casting gear. Guides and experienced anglers prefer 10-pound-test or less, and reels should be able to hold at least 150 to 200 yards of line to counter the steelheads’ long runs.

“The fish do get very line-shy, especially in the clear water and when there is a lot of fishing pressure,” says Parker. “Also, smaller-diameter line gives you a more natural presentation.”

Some of the best flyfishing occurs in November despite the cool weather. Use 9-foot, 8-weight rods, reels with good disc drags, floating lines and 6- to 8-pound-test leaders and tippets. Bear’s Estaz Egg, Bear’s Hex Nymphs and lime Sunday Caddis patterns are effective then.

“You’re going to average six to ten hookups a day, but some days you’ll fight as many as twenty steelhead,” Harley says.