The backwoods lakes along Maine's northern border are full of tough-fighting muskellunge waiting to trounce your lure. 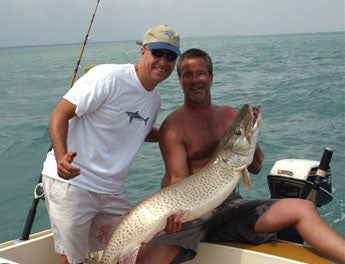 Common wisdom says there are no muskellunge in Maine. I’ve heard this from many Northeastern anglers who look to Maine’s pristine lakes and rivers exclusively for big trout and salmon. Oh, but they’re wrong. As the old-timer who maintains the Baker Lake campsite would say in his strong, Down-East accent, “Ayah, the place is full of those alligaytas without legs. Useta be a dahn good salmon and trout lake, but not any mo’ah. They got et.”

It’s true: Muskies are living in Maine. To the chagrin of the Maine Department of Inland Fisheries and Game, they are thriving, and not just in Baker Lake. But getting to them requires a sturdy vehicle, a sturdier pair of legs and a good sense of direction. That last is a must to navigate the spiderweb of logging roads that lead to the lakes.

Hope for Overcast Skies
During three days of constant dawn-to-dusk casting under August’s bluebird skies, we had landed only two muskellunge, measuring 36 and 40 inches. It was the 22 other encounters-short hits and follows-that kept us fishing. Three of those fish were larger than the 40-incher and one was a true monster, judging from the huge bulge of water that welled up as it missed my partner’s spinnerbait. The behemoth rose from a distinctive V-shaped cut in a patch of lily pads. We worked that spot constantly, hoping the fish would strike again. Missing a fish like that will haunt you for weeks.

On the last day, the fishing gods smiled and gave us rain, wind and overcast skies-perfect muskie-fishing weather. We each caught fish within our first 10 casts, so things looked favorable. We had another eight encounters that morning, but didn’t land any more muskies.

On our final run back to camp, I gave the monster of the pads a parting shot, hoping the weather change had put the huge fish in a feeding mode. My heart was pounding as we approached the distinctive pie-shaped cut in the lilies.

The huge orange-and-black spinnerbait splashed down perfectly in the middle of the lily pads. The blades caught and the lure began bulging the water like a torpedo. Suddenly an explosion, the likes of which I’ve only seen in the Atlantic Ocean, engulfed the lure. Amid the white spray, the lure was blown halfway back to the boat as an angry muskie appeared and sank out of sight in the center of the frothy boil. That stubborn fish was easily 48 inches and pushing 30 pounds.[pagebreak]

Fish Along the Border
That was my first-ever muskie fishing experience at Baker Lake, a remote destination in a huge expanse of wilderness along the Quebec border. Baker Lake is on the Baker Branch tributary to the St. John’s River, located about 23 miles east of the St. Aurelie, Quebec, border-crossing checkpoint and roughly 65 miles north of Greenville. Anglers pay $24 per night for a mowed campsite on the lake, with picnic tables and an outhouse-ritzy for this part of the world.

No one knows exactly where Maine’s muskies came from, but about 20 to 25 years ago, a few fish made their way into the St. John’s River from a population across the border in Quebec. They initially swam up the Baker Branch tributary and colonized Baker Lake. Since then muskies have made their way downstream into Glazier and Beau lakes.

As they invade the virgin impoundments downriver from Glazier Lake into New Brunswick, Canada, there is some incredible muskie fishing. Unfortunately, this is at the expense of the trout and salmon that live in the lower St. John’s and its tributaries.

Muskellunge are a rapidly emerging species that the state of Maine does not recognize or regulate. To date there are absolutely no length restrictions or bag limits on muskies anywhere in the state. Maine considers them exotics, hence their lack of game-fish status.

Explore the Tributaries
Harmful or beneficial, Maine muskie fishing is here to stay. With soo much water to explore, there is a very real potential to cast a line to literally untouched populations of muskies in some of the tributary lakes, hidden backwaters, impoundments and slow stretches of the huge St. John’s River. The river and its tributaries hold muskies, with hundreds of miles of unexplored habitat.

Buy a copy of DeLorme’s Maine Atlas and Gazetteer, a detailed reference that shows unpaved and logging roads as well as highways. In four days with this book, a fishing license, a tank of gas and supplies, it’s possible to catch some real bruiser muskies.