Looking for go-to steelhead tactics? Well, you might not believe these. 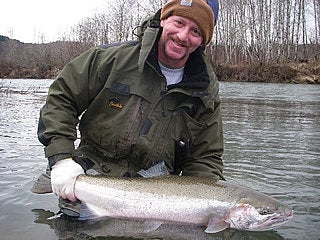 I won’t say that hard-core steelhead fishermen are stubborn when it comes to trying new techniques, but shoving a mule up a set of ATV ramps into an undersized horse trailer would be a fair comparison. Perhaps it’s understandable, considering that the migratory rainbow trout we call steelhead can cop attitudes in winter that make post-cold-front bass seem like slavering piranhas. The consensus among veteran anglers: Why waste time deviating from what’s worked before?

Thankfully, a small number of pioneering fishermen have been willing to fiddle with “foreign” methods in their home waters and often as not have scored impressive successes. These go-to tactics (and variations on the themes) from around the U.S. will likely work where you fish for steelhead. Each one is worth trying–unless, of course, you’ve succumbed to mule mentality.

Spinners have been taking steelies for a long time, but many who try them quickly give up and go back to drifting eggs. The trouble is that many anglers think the lures need to be cranked through the water in bass-fishing fashion. For steelies, the trick is to drift a spinner through a run or a deep hole with current, as you would during the spawn. Just keep slight tension on your line or even spill line from time to time to extend the distance the lure travels downstream. Your cast should be quartering up or across the river. The blade should turn slowly, stall, flash and turn again in its travel. Make sure to use a high-quality swivel to avoid line twist.

More manufacturers are now producing long sticks (10- or 12-foot spinning and bait-casting rods), designed for float-fishing, drifting eggs and such, that will help a wading angler work spinners better than ever before. An alternative–and darn fun–method for smaller rivers is to use a fly rod at least 9 feet long with straight monofilament (not fly line) and an ultralight spinner (old-time, non-weighted spinners are great) with a couple of split shot pinched on about 18 inches up the line. No real casting is involved, just a lob or flip. On smaller waters you’ll often be fishing runs that mainly call for you simply to reach out, drop the offering and then let it swim on down through the holding water.

Winter steelhead usually hold in the deeper pools, sometimes below rapid ends or beneath undercut banks. You need to get baits down. If you’re a spoon guy, don’t hesitate to try those metal enticers. Again, don’t crank them; let them drift, flash and bump the bottom. Remember, too, that winter steelies aren’t like summer-run or even fall-run fish. A slight heaviness telegraphed up your rod might be the only signal for their gentle takes.

I’d bet that more anglers have hooked their first steelhead by feeding crankbaits downstream than by any other method. There have been a number of upgrades in the game, however. The basics involve a boat anchored above a deep hole and a crankbait slipped into the current and allowed to work at the head of the drop-off. After a time, the lures are sent 3 or 4 feet farther downcurrent, and so on until the entire hole has been covered. In cold weather you need to take a while working the baits through. Shallower runs and holding areas are better fished a shorter time, often with another angler or a guide on the oars rowing, allowing the boat to slowly slip downstream. Row-throughs also present the bait at different angles and can trigger strikes even from holes where lures sent straight downstream were ignored before. On sections of large rivers where motors are permitted, back-trolling walleye-style is an alternative for presenting baits at varied angles and for working large pools.

Crankbait enthusiasts have their pet lures. In high water and faster currents, lures that track straight and hold at speed are needed. You can experiment with other lures in low water and lesser currents. Historically, preferred plugs have been the Tadpolly and Flatfish. Hot Shots gained top-gun status on the West Coast and won the hearts of many steelheaders in the Midwest and East. They were soon followed by Hot’N Tots, a walleye favorite. Today the new darling among cranksters is the Winning Streak from Dave’s Ka-Boom Baits (405-537-2027; www.daveslures.com). The Winning Streak is a 1/4-ounce lure with a hardened aluminum diving lip that serves to make the body vibrate strongly and dart side to side erratically.

Bait-casting reels are increasingly preferred for this kind of fishing. The newest user-friendly superlines (gel-spun) allow the lures to work well and get deep with no added weight.

Nor is plugging confined to boat anglers alone. Luhr Jensen’s Hot Shot Side Planer (541-386-3811; www.luhrjensen.com) lets you run crankbaits from shore out into the current. It clips to your line, trips on the strike for minimal resistance and adjusts for right- or left-hand running. It’s best for medium to fast currents. A few years back the company’s Buzz Ramsey was demonstrating the rig to bank fishermen on British Columbia’s Thompson River. He nabbed a 25-pound 13-ounce steelie that remains the Fresh Water Fishing Hall of Fame’s 30-pound-test line record for the sea-run fish.

Salmon eggs are the universal steelhead bait across the U.S. and in Canada, but regionally popular natural offerings could score handsomely everywhere, too. Midwesterners brought wigglers (big mayfly nymphs) to prominence, fishing them on ultralight line and noodle rods created by pioneering Michigan angler Dick Swan. Crawler tails work fine, as do ghost shrimp, available in many Canadian bait shops. Crayfish tails often play second fiddle, but steelheaders in the know use them as their key offering. Gary Loomis, founder of the rod company that bears his name, is a master “crab-tail” fisher.

Loomis uses only fresh crayfish tails; it’s a scent issue with him. After removing the tail from its owner, Loomis cracks open the shell a bit at the wide end. Then he squeezes out the meat from the small end to produce a curl of succulent bait. An option for anglers without regular access to fresh crawdads is to boil newly caught crayfish for five minutes, break off the tails and then freeze them. Before fishing, you can anoint the defrosted tails with the same crayfish scent used by many bass anglers. Another variation is to use live baby crayfish hooked once through the tail [see Fishing, July 1987].

Though Loomis uses a rig consisting of a standard bottom-bouncing pencil lead and three-way swivel, tails or baby crayfish can be fished successfully on float setups. These rigs are becoming popular in rivers where there is some consistency to the bottom depth. Sensitive European-type floats are used. Just below the float the leader is weighted with strings of split shot so that the float will sink at the slightest resistance, telegraphing a take. Normally, one or two lighter shot are used nearer the bait. You’ll want a long spinning rod (as mentioned above), since the float and the shot are fixed. Otherwise, if you’re fishing 10 feet of water, for example, you won’t be able to crank in all that terminal rigging.

Float-fishing, especially with lighter line, can be sheer dynamite on steelies. In fact, it is so productive that flyfishermen who are not about to miss out on the action have devised similar systems for float-drifting artificial nymphs down runs.

A fly rod float system is ideal for fishing deep, very slow water where heavy split-shot rigs would snag. Outfitter Ray Schmidt of Wellston, Mich. (231-848-4191; Schmidt@schmidtoutfitters.com), devised the system I favor. [For details, see illustration on the previous page.] It calls for a 14-foot-long 7- to 9-weight spey rod that’s handled with both hands. Schmidt has been experimenting with a short-head Rio Wind Cutter fly line with another 30 feet of fly line added.

Scientific Anglers will soon release a short-head spey line that will likely work once trimmed back from the tip. A 57-foot line (head and belly) is what’s needed along with three Blackbird microswivels and a small Blackbird float. (905-683-8989; www.redwingtackle.com) The top section of the leader, where you peg the float, is .026 inch, 45-pound-test mono, followed by 20-pound-test mono to hold the hollow-core pencil lead weight. For the tippet use 4- to 6-pound-test clear Maxima of desired length. Good fly choices include a Hex nymph (often in tandem with an egg fly) and steelhead Woolly Bugger.

Once you have several of these outfits ready you can break them down by clipping the whole float/leader rig from the short leader butt tied to the fly line. You rarely lose an outfit, since the fly will break off from the lighter tippet if snagged. Using the long spey rod, the leader turns over like a dream. When the rig hits the water, raise the rod and throw a roll cast sharply to create slack just above the float. When the weight drops, the float will tip up; make a quick mend. Away the rig will go, down the water seam. You can let it drift 75 to 100 feet. After a drift you can drag the rig back part of the way and then snap-roll it to an adjacent seam. The float can be set to any depth. Though it will work at any time, the system is terrific in winter when steelhead move into slow, deep holding areas. Interested anglers can contact Schmidt to purchase this rig.

Adapt any of these tactics to your home waters or anywhere you travel from now through summer steelhead season, and you’ll have far fewer excuses for not catching these great-hearted fish.

Where to Catch a Record Steelhead

The all-tackle world-record steelhead is 42 pounds 2 ounces and was caught by David R. White in 1970 at Bell Island, Alaska.

The following rivers in Canada and the U.S. have produced line-class record steelhead of 20 pounds or more as recorded by the International Game Fish Association and the Fresh Water Fishing Hall of Fame: Bowmanville Creek, Ontario; East Fork Lewis, Wash.; Quinault, Wash.; Skeena, British Columbia; and the Thompson, British Columbia.