The film follows the subsistence and commercial salmon fishermen of Bristol Bay, Alaska, as they work tirelessly to make their living off the land and water, and combat the proposed open pit gold and copper Pebble Mine. 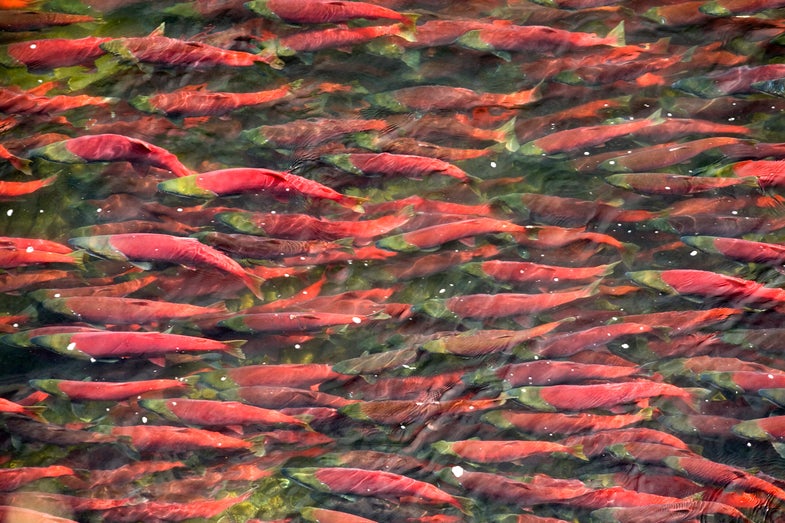 Travis Rummel is the co-director of Red Gold, a new documentary that has done much to bring Alaska’s Pebble Mining controversy to the forefront of public consciousness. The film follows the subsistence and commercial salmon fishermen of Bristol Bay, Alaska, as they work tirelessly to make their living off the land and water, and combat the proposed open pit gold and copper Pebble Mine.

1. What is your background–both general, and as a filmmaker?

I grew up in New Jersey within view of New York City. I went to school at Colorado College and then became a fly fishing guide in Telluride. At the time, I was also doing photography work for the local newspaper there. Ben Knight [co-director, Red Gold] hired me on as a part time photographer for the Daily Planet. In the course of working with him for a year we decided to make a film that would be good enough to get into the Telluride Mountain Film Festival. After two years, we completed our first film,”The Hatch.” It made it into Mountain Film in Telluride as well as the Banff Mountain Film, and suddenly we began to think there might be a niche fly fishing market that we could fill with films. The rest is history. It was an organic evolution; we didn’t set out to become filmmakers. It just happened for us. Neither Ben nor I have any formal training in filmmaking. We learned in real time, which translated to a painfully slow process.

2. How did you first learn about the Bristol Bay situation, and what made you think it would be good for a documentary film?

Originally we thought about Bristol Bay in terms of fly fishing and conservation because that was our background at the time. As we researched the issue and spent time in the region, we began to see what a complex and interesting story the proposed Pebble Mine was. There were sport fishermen, the native subsistence users and the commercial fishermen all coming together to resist the Pebble Mine. That was just one side of the argument; on the other side, there was the mining company that just discovered 300-600 billion dollars worth of gold, copper and molybdenum. It is the second largest copper sulfide deposit ever discovered–anywhere! So both sides were–and still are–passionate about their claims to the region. There was a great, natural tension to the story.

3. How much preparation went into the filmmaking?

We raised the entire budget ourselves, with a lot of help from the fly fishing industry, friends, private donors and foundations. We had only raised about half of the budget by the time we went to Bristol Bay; luckily the money continued to come in for the project.

Despite all the planning you do before a film, reality will always dictate the outcome. We had a great production schedule lined up, but mostly we relied on our instincts as far as finding characters to tell the story for us.

4. How long did it take to make the film, from start to finish?

It took just under two years from the initial idea to premiering at the Telluride Mountain Film Festival. Eight months of pre-production planning and research, 70 days in Bristol Bay shooting, two weeks of shooting in the lower 48 states and then about eight months of editing.

5. The film has been getting a lot of positive press and praise. Has the publicity met your expectations?

It has been an incredible ride. Red Gold and its reception by audiences has far exceeded my expectations on two levels. As a filmmaker, the project was a major evolution in telling a complex story with a high production value. The film has been doing exceptionally well on the film festival circuit and has won an award in every competitive festival it has been in. As a means of raising awareness, which was the primary goal in creating Red Gold, we have been amazed at the impacts it has already had in Alaska, the lower 48 states and internationally.

I think we were a bit surprised with how friendly folks were to us and how many people went way out of their way to help us get around, meet people we needed to meet, and look after us. It was pretty incredible to be in Bristol Bay for 70 days and only stay in a hotel for two nights. We slept in fishermen’s storage containers, a mini van, a Ford 250 with a leaky cab, cabins, tents and the Peter Pan cannery. Everyday was a unique experience for us.

7. The film seems to respectfully present the opinions of both sides–those associated with Pebble Mine, and the salmon fishing community of Bristol Bay. Was it always the aim of this film to be somewhat impartial, or at least not overtly one-sided?

We wanted to be as neutral as possible in portraying the issue to our audience. Our hope was that people could walk out of the theater and make up their mind about how they would like to see Bristol Bay’s future. The goal with the film was to put a human face on the staggering numbers associated with both the fishery and the mine.

8. Some of the scenes–particularly with the salmon fishing, and the guides–make Alaska look precisely like the rugged place that most people consider it to be. Did you ever have difficulty filming in such rough terrain, or have any general filmmaking frustrations?

We were pretty lucky for the most part while shooting in Bristol Bay. We were shooting to card with a fully digital workflow. This means that we had to back up all the footage we shot redundantly on a daily basis. It made for a lot of late nights because the light would be amazing from 10pm-12am, so when were done shooting we had to copy all the footage to two hard drives, format the cards and make sure we had everything where it needed to be. We had one hard drive failure and had to have two drives flown in via floatplane to the village of Igiugig [population: 34].

9. What can you tell us about the current state of the Pebble Mine and Bristol Bay? Have there been any developments since the time of the film?

There is still a one to two year window to protect Bristol Bay permanently before the Pebble Partnership enters the permitting phase. In the history of Alaska mine permitting, a major mine has never not gotten its permits. Permitting in Alaska is a mitigation process and not a yes/no scenario. Commodity prices have also tanked which has hurt the stock price of the Pebble Partnership and made the 6 billion or so needed to develop the mine a but harder to come up with.

10. Any further thoughts on the film or the Pebble Mine/Bristol Bay situation that you would like to share:

The Bush administration–through the Bureau of Land management–just opened over a million acres of Bristol Bay, adjacent to the Pebble claim, for hard rock mining. The Obama transition team can rescind this–let them know you value salmon over mining in Bristol Bay!