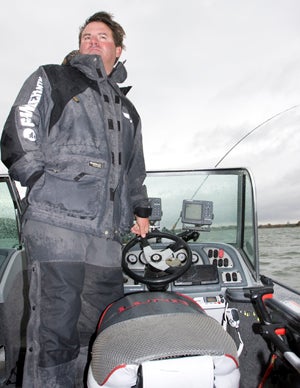 It’s seven a.m., and sleet driven by a 30-knot wind pelts the windshield as Doug Iverson idles his Lund out of the harbor at Pierre, South Dakota’s Spring Creek Resort & Deepwater Marina. Bill Sutter, owner/operator of the Marina sits in the chair behind me and laughs while I shiver, visions of palm trees dancing in my head.

“He’s obsessed,” Bill says. It’s the third morning of fishing in weather as bad or worse, and of catching fat limits of walleyes before pheasant season opens at noon.

“Obviously,” I said, clipping a line into a planer board with numb fingers, per Doug’s instructions. I am silently wondering about, and slightly envious of, Doug’s ability to balance family, work and so much fishing and hunting. He is a husband and father of three young sports, the Midwest sales rep for the western apparel company, Roper, and a tireless emissary and advocate for the sporting paradise that is South Dakota.

In the extreme low pressure and with fishable waters limited by the wind, the fishing is challenging to say the least. We pick up a fish here and there, usually right after this successful businessman (Iverson is the Midwest sales rep for Roper), husband and father of three, makes some minor adjustment. The adjustments are partly intuitive, but also a result of years of refinement and a reflection of thousands of hours on the water.

OL: When’s your favorite time to fish for walleyes?

Iverson: When most guys are putting their boats up for the winter, I’m backing down the ramp. Walleyes feed year-round.

OL: For a part-timer, you’ve done well in major walleye tournaments, haven’t you?

Iverson: I won the South Dakota Governor’s Cup, which is a really prestigious, 30-year-old event. I’ve had seven or eight top-ten finishes on the FLW and Professional Walleye Trail, plus we were the Gander Mountain Circuit team of the year in South Dakota, and the Cabela’s national team championship.

OL: What are the two most important things in tournament walleye fishing?

Iverson: Luck, ever since they banned culling. And in the tournaments where you draw an amateur partner, it’s important to assess that angler’s strengths and weaknesses quickly, to decide on tactics and individual responsibilities on the boat.

OL: You don’t seem like the type of guy to let a few feet of ice get in the way of your walleye fishing.

Iverson: I love it when it gets thick enough to get out ice fishing at Fort Thompson or in stilling basin. The fish are loaded up. We use an underwater camera to watch the fish bite, and a jig-and-minnow or jig-and-Gulp! combo. You see those twin glowing eyes and you’re heart gets going then all of a sudden your cork goes down. It’s a rush. It’s just awesome.

OL: Where do you look for walleyes in the early spring?

Iverson: As with walleye fishing in the late fall, the fish are close to the dams during March/April. That’s a region-wide pattern of migration. But now they’re in pre-spawn mode, feeding like mad before moving into the shallows in late April and May. When the water is colder, walleyes move into the holes. They’re in the wing dams, below powerhouses, in current breaks and backwaters near the dams, even up in the tailraces because of the bait washing through.

OL: What are your pre-spawn tactics?

Iverson: Pre-spawn walleye fishing is mostly jig fishing, but I occasionally pull crankbaits if the fish are elusive and if there wasn’t a big winter kill-off of gizzard shad. I use 4- or 6-pound Trilene mono in the river, when pitching on the bank and letting the jig roll in the current. Braid is just to stiff for that application–you pull the jig out of a fish’s mouth with it. But I use 6-pound Fireline for all my vertical jigging in the lakes. I’ve also almost stopped fishing with bait. Berkley Gulp! and soft-plastic baits have really revolutionized walleye jigging. They knock the snot out of Gulp! when they’re softly slurping minnows. I use it on jigheads, with a splitshot-and-hook rig and on bottom bouncers.

OL: You spent hours showing me photos of your three kids with their first walleyes and biggest walleyes. Is the fishery safe for the future generations?

Iverson: No, we have a major issue with the Omaha District of the Army Corps of Engineers. A few years back, they opened the Oahe spillway and we lost like a million smelt a day out of the reservoir. Smelt spawn early in the spring and if the Corps doesn’t leave the water up, a year-class of bait ends up high and dry. Low water also affects the walleye and northern [pike] spawn. They spawn in April and May right when the Corps starts cranking up flows for barge traffic down in Sioux City, Iowa. We lost a couple year-classes thanks to the Corps. They spawn way back in the rivers, in really shallow water, over rocky, sandy, and gravelly bottoms. When they let the water down, that habitat dries up. It makes no sense. The barge industry generates about $7 million barge traffic industry, when the recreational use is like $70 million for the Missouri watershed. Fishing is about ten times the economic engine. We’ve got to get the Corps to reassess the strength of the relative economic engines, and modify water management fairly.