It's time for the best striper fishing of the year. 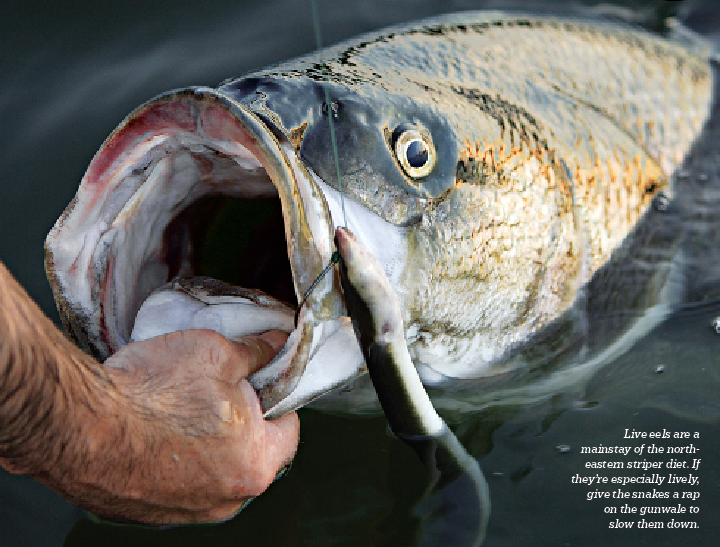 It was mid-October, the peak of the fall migration, and we were drifting among bunker schools herded into frightened, amoebic-like masses by cow stripers. Almost within casting range of rush-hour traffic on I-95 and a tanker offloading in Connecticut’s New Haven Harbor, this was as easy as trophy fishing gets in southern New England. But the bite was on in the region, and ours was only one of many popular live-bait techniques for targeting fall cows.

From Massachusetts to New York City, October is when the big girls stage in southern New England’s rips and estuaries en route to their destination — famous wintering grounds of the Hudson River, Delaware River and Chesapeake Bay.

Cows in the 30-, 40- and even 50-pound range are targets of pros such as Connecticut’s Capt. Chris Elser (CT-Fishing.com), who has fished the western Long Island Sound for more than 30 years.

Unlike in waters to the north and east, much of the bottom in the western sound is muddy and devoid of significant structure. Because of that, one of Capt. Elser’s most successful techniques involves searching for and then angling near adult bunker schools using live baitfish.

“If you intend to keep your baits alive for long periods,” says Elser, “It’s important to have a circular livewell. I usually take the time to fill both livewells with bunker before I start fishing. But regardless of what type of baitfish you get, keep your bait-gathering time realistic, because your goal is to catch big stripers, not just bait.”

Elser looks for areas of current flow abutting an obstruction, contour or even another current. He suggests studying your local charts to reveal spots where conflicting currents meet or where a current strikes a structure, which congregates bait and attracts large bass. “Estuary outflows and river channels are key target zones, as are nearshore reefs,” Elser says.
Elser adds that it’s critically important to anchor your boat well before your target peak tide. “If you plow your boat into position when the fish have already set up in their feeding stations, you’re too late and will spook them in any water less than twenty feet deep.”

He prefers to anchor when fishing live bait in skinny water because big bass are much shier than smaller fish. This technique requires patience and quiet well in advance of when the fish arrive in their feeding lanes. “In ten- to fifteen-foot-deep target zones,” says Elser, “I anchor an hour before I anticipate large bass will arrive.”

Success comes three ways
Another of the most productive ways to fish Northeast rips is by drifting eels off three-way rigs. A master of this technique is Capt. Kerry Douton of the charterboat Dot-E-Dee and owner of J&B Tackle in Niantic, Connecticut (jbtackle.com). Douton specializes in fishing the treacherous Race at the mouth of the Long Island Sound.

“In the Race, like in other deep rips, positioning the boat is pretty simple” says Capt. Douton. “You run uptide from the shoal, start in deeper water than what the shoal is, and drift up the slope and over the high spot.

“The basic fishing procedure is to drop the rig to the bottom, take three turns, and hold it still. Every time you feel a bump, which most of the time is bottom, swing the rod up and take three turns down. That either clears the rocks or sets the hook on a fish. What you are doing, in effect, is trolling with baitfish using only the tide. The three-way rig keeps the eel down.”

Another top striper skipper who favors live bait for autumn cows is Capt. Ned Kittredge. ‚ÄuLive-bait fishing for stripers is one of the most productive methods available‚ “provided you can obtain good bait,” says Capt. Kittredge, who runs his 33-foot Hydra-Sports Watch Out from Westport, Massachusetts. “In recent years, since the conservation ban on‚ river herring‚ [alewives and blueback herring], I’ve caught large stripers on mackerel, eels, menhaden, porgies and Atlantic herring. The biggest secret is maintaining the bait‚ quality.”

The Top Three Fall Striper Baits
Porgies With bunker sometimes absent due to commercial harvesting in the mid-Atlantic region, porgies have become favored striper bait for daytime fishing. Remember, porgies must be of legal size even when harvested just for bait.

Eels Day or night, eels are the go-to cow bait. One advantage of eels is that they are always available for purchase, which eliminates the worry and work of finding bait. Even when fishing other live baits during daylight hours, most pros switch to eels at night.

Hickory shad Like porgies, are a great choice when bunker are either in short supply or completely unavailable. The recent ban on blueback and river herring has also caused many pros to switch to shad when they are available.