The wildest fall fish run is about to hit. The bluefish bite is on 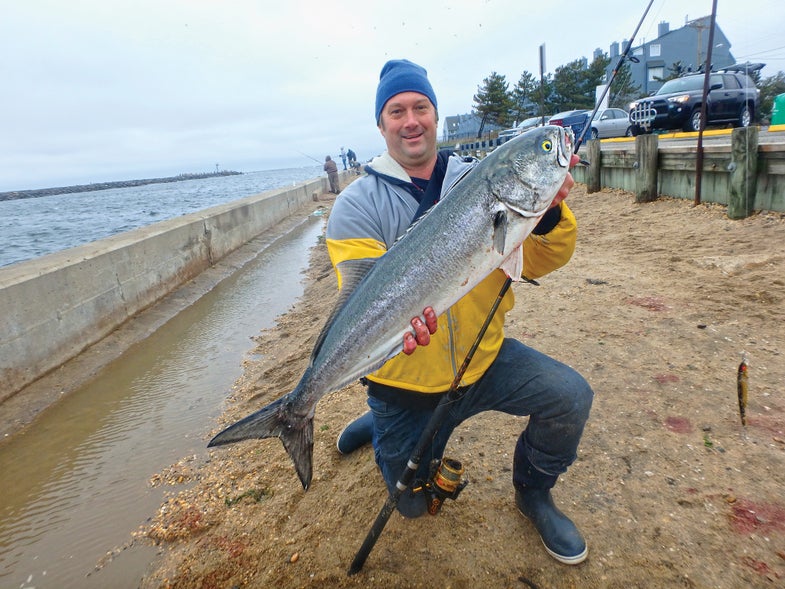 Dateline October 13, 2007: East Coast surfcasters remember it well. It was a bluefish blitz for the ages. John Bushell Jr., proprietor of Betty and Nick’s Bait and Tackle in Seaside Park, New Jersey, still gushes when he speaks of the event.

“It was the biggest fall bluefish blitz I have ever seen,” says Bushell, who has owned the renowned bait shop for 47 years. “It lasted three days straight. All I saw were thousands of beached blues, dozens of broken rods and reels, and an untold number of snapped lines.” “I was visiting from California that week,” says Sportfishing magazine photographer Tom Lynch. “That blitz made me move back to New Jersey. It was a 24-hour sustained show.”

Precisely why it happened remains something of a mystery. What is sure, though, are the conditions: bluebird skies, gin-clear water, and one-foot swells. The crisp fall air and light, westerly winds pushed baitfish schools of round herring, peanut bunker, spearing, and sandeels into the undertow by the millions.

At 1 p.m. on the 13th, a fellow surfcaster, Guy Jackson, called. All I heard was some sort of insane screaming and muffled words that sounded vaguely like: “Holy s*%!, dude! Get up to your beach now!” As I crossed the dunes, surf stick in hand, an amazing scene unfolded. For 15 miles, from Point Pleasant to Island Beach State Park, lay a mass of frenzied blackness—hundreds of diving birds, and boiling water that looked for all the world like multiple depth charges going off at once. It was an invasion.

After losing most of my gear landing and breaking off 15- to 18-pound gators, I cast my last Ava 17 metal and came tight with a bluefish of knee-buckling proportions. It later taped out at 46 inches, with a basketball-sized mouth lined with teeth that would give a mako shark pause. Legendary tales were born that day. This fall, the gators will be on the prowl once again along the Eastern Seaboard. It may not be as historic as 2007, but the fall blitz always features the biggest blues of the year. Want to target gorilla-sized blues? Here are five tricks to use by boat or surf.

You won’t find 3-pound cocktail blues hanging with 15-pound gators. It’s not good for their survival, as there is no love lost among these cannibals. Once you encounter a few big blues in the 15- to 20-pound bracket, there will be more of the same class in the area. If you’re into small fish, leave and hunt down the bigger ones.

You’ve got to stir up action in the surf. Gorilla blues act on ambush instincts, and large 3-ounce topwater poppers incite a severe strike reaction. Work composite pencil or chugging poppers hard in an effort to create serious splash and commotion. Leave the wooden lures at home—they’ll just be destroyed.

Gators are looking for a hearty meal. Start a well-defined bunker chum slick on any inshore ridge. Use a short length of steel leader with a size 6/0 to 8/0 baitholder hook, and rig up a large 3- to 4-inch chunk of back-cut bunker chunk. Apply the appropriate egg sinkers from ½ to 6 ounces to get the bait in the zone. Dish out the line so the chunk sinks naturally with the chum slick.

Sandeels, herring, and menhaden are the predominant fall bait species, so do your best to imitate them with large metal lures. Drop Ava jigs with green, red, or yellow tails to mimic sandeels, or go with wide-­profile, Crippled Herring jigs in 4- to 6-ounce sizes if herring and bunker are around. Let the lure hit the bottom, then reel it up as fast as you can. Note the depth and count the cranks to assess the fish-holding depth until you get hit. Then repeat the process. Bigger blues usually lie below the smaller ones.

Water temperature (58 to 65 degrees) triggers baitfish school movement, which entices the bluefish down the Eastern Seaboard. In October and November, look for big blues to be off the New York and New Jersey coasts. From December into January, blues make their move off Maryland and the Outer Banks of North Carolina.