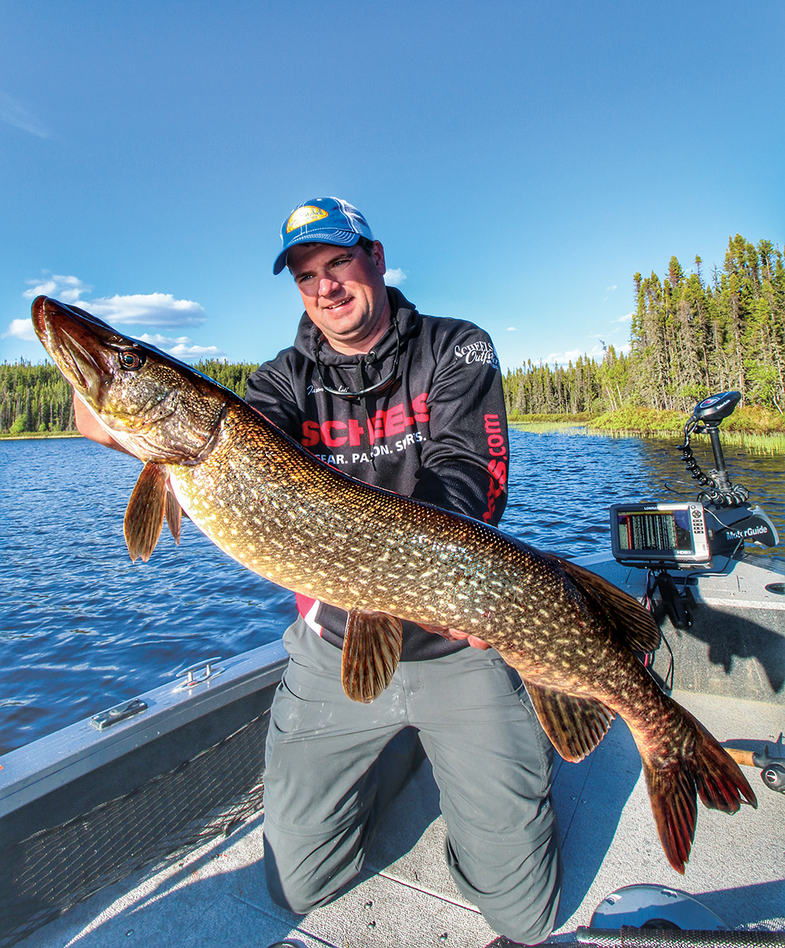 This great northern fell to a straight-wire spinnerbait in late summer. David A. Brown
SHARE

Watching a 45-inch rocket with teeth burst from beneath a copse of water lettuce leads the highlight reel from my recent trip to Saskatchewan. The big northern pike absolutely crushed my spinnerbait. At the right time and with the right bait, northerns can be that way. They are particularly bold in such lightly trafficked regions, but the toothy beasts would probably hammer an artificial in a swimming pool full of kids if enticed correctly. That is, if they didn’t make a run at the kids first.

“It’s pretty simple: There’s nothing more exciting in freshwater angling,” says Anderson. “A big fish looks like a log floating up in the water column, then snakes back and forth looking for the best angle of attack—then it’ll chow down 10 feet from where you’re standing. It’s fantastic.”

Top times for Anderson are the beginning of summer, when water temperatures reach 65 to 70, and during the first late-summer cold fronts that begin to push fish toward the shallows. Big Tooth Tackle straight-wire spinnerbaits are a particular favorite. He prefers the single-hook model for thicker cover and the double-­hook version for maximum profile and fish-snatching power. For better action, he replaces the top swivel that connects the blade to the bait with a quality ball-­bearing swivel. Willowleaf blades emit lots of thump, and are semi-weedless.

“I remember one time when pike were doing just that on Lake of the Woods,” says Anderson. “A spinnerbait was the only lure that could reach the fish without snagging. The final count was four pike over 40 inches.”

GET A MOVE ON

When summertime heat sends pike on forage runs over deep-water structure, covering as much water as possible becomes important for guides hoping to get clients on big fish.

In New Hampshire, Tim Moore’s go-to lures are either a Salmo Perch or a 6-inch Storm Wildeye Swim Shad—both in white. He triggers more strikes by painting the backs of the lures red to simulate blood.

Moore often varies his trolling angles to give the fish different looks. Big fish, he says, become picky and only hit baits that track correctly.

“I’ve noticed that big pike will follow lures longer than smaller fish will,” says Moore. “It’s almost as if they study it before they hit it. When they’re following, I’ll move the rod forward and backward to cause a slight pause. Sometimes they’ll hit it when it speeds up, thinking that it’s getting away. Other times they’ll hit it on the pause.”

When surface temps push past the mid-60s, North Dakota guide Jason Mitchell looks for pike suspending off the sides of points, reefs, and other structure where they hunt cold-water baitfish like smelt, lake herring, ciscoes, whitefish, or tullibees. Unlike Anderson and Granrud, however, Mitchell gets the drop on big fish by breaking out the jigging gear.

“You can troll crankbaits to reach these fish, but vertical jigging is more precise when you’re working an exact area,” he says. “I first got my eyes opened while vertical jigging for lake trout—and catching pike. Now, I target these big fish over deep water on purpose.”

When his fishfinder shows bait forming a column, he knows pike are just below them. To reach his quarry, Mitchell relies on rattlebaits like the Number 7 Salmo Zipper, tube jigs, flukes, or paddletail swimbaits on a Kalins jighead or heavy spoon.

“You can often see the fish tracking the lure on the fishfinder,” says Mitchell. “When it comes in, keep the lure moving up—don’t drop it down below the fish.”

If you get bit, remember precisely how many cranks you were off the bottom when it happened and repeat.