Ice Fishing for Panfish: The Best Tips and Tactics

Save the wintertime barbecue for the amateurs. The new breed of icefisherman is all about catching a bunch of fish. 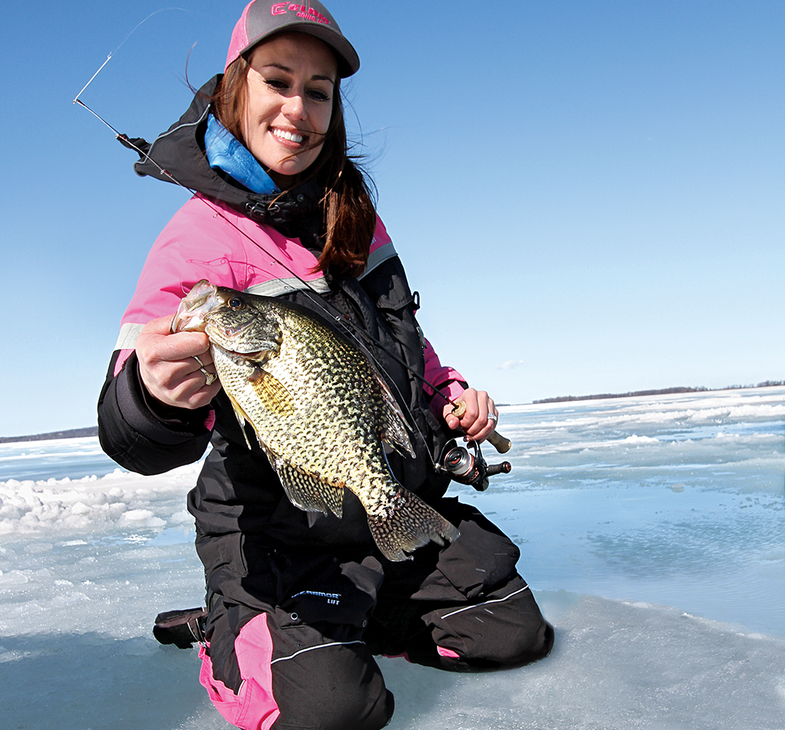 Peacock bass in the Ama­zon, giant largemouths from Mexico’s bass factories, massive pike wrested from the icy waters of Canada’s northernmost reaches—I’ve enjoyed plenty of angling adventures. None, though, have intrigued me more than ice fishing for panfish. Go figure. I’m amazed myself.

Recent winter forays to Minnesota’s Leech Lake and other Ice Belt “hot” spots have captivated my analytical mind like little else. The ultra-detailed strategies and technological advancements that drive today’s icefishing scene have turned what was once an excuse to have a wintertime beer-and-brat cookout with a bunch of fishing buddies into a serious cold-weather pursuit.

To frame this, Grumpy Old Men was to icefishing what Jaws was to pretty much every shark swimming—loose with the facts and rough on the PR. Camping over one or two ice holes—maybe inside a tricked-out permanent shelter—leans more toward the sport’s fraternal side, but it’s a far cry from how modern, mission-­directed ice anglers go about the business of catching fish.

We can break down the winter pursuit of bluegills, crappies, pumpkinseed, and yellow perch to just a few key components. Remember, to catch fish consistently, you need to adjust to conditions and fish behavior. Local specifics vary from lake to lake, but Iowa’s Kevan Paul says you can’t go wrong by targeting weed beds—especially those crisp-green patches that pump out oxygen and fuel the food chain of aquatic insects and microorganisms. But how do you go about finding weed beds under a foot of ice?

“From the macro view, shallow bays will always be the most likely weed areas,” says Paul. “But it’s also a good idea to network with locals (including bait-shop owners and fisheries biologists) to get dialed in.”

On the ice, Paul starts in about 7 feet of water and drills a line of test holes all the way to the bank (noting ice thickness for safety). Then, using a flasher or underwater camera, he’ll slide over about 30 feet and drill another line of holes in order to develop a grid that will eventually tell him where the weeds are located. Then he’ll either rotate through the playing field and jig on one and use tip-ups to signal strikes on others.

“The first thing I do is find out where the weed line is in the lake,” says icefishing legend Dave Genz. “If it’s 8 feet or less, I usually look for fish in deeper water, because those weeds usually fall down in the summertime. If it’s 10 feet or more, then I’ll look for standing green weeds when first ice comes.”

At mid-season, most lakes see a mass migration of fish from weed beds to deeper water where bluegills, sunfish, and perch feast on emerging blood worms, which are the larvae of a non-biting midge, while crappies suspend around schools of minnows, shad, and shiners.

Late ice finds the pattern reversing, as many of those deep fish return to the warming shallows. Here, the first stage of melting ice and snow sends freshly oxygenated water and any forage it gathers through all those early-season holes and naturally occurring cracks. This, along with new bug hatches spurred by increasing light levels, fosters a major late-ice feed.

Lake maps can point you to contour breaks, humps, and holes. Genz points out that wherever you fish, early morning and evening have high potential, as panfish capitalize on the low-light spike in zooplankton activity. At any hour, keep your shadow off the hole and minimize the noise you make, as it can reverberate through ice and water.

Whereas blind drops may catch fish, knowing your depth, habitat, and fish positioning will make you more efficient. Some like the video-game look of a high-def portable fishfinder, but Paul says flashers offer a superior perspective.

“You have quicker response on a flasher, and your target ID and fish separation is going to be much better,” he says. You’re able to separate your jig from the fish down to about ½ inch, so when that fish is coming up, you know when it’s ½ inch away. On a fish finder, when the fish comes to within a couple of inches of your jig, you’re going to see a blob.”
Another benefit to using a flasher, adds Paul, is that you can adjust cadence. He’ll use varying levels of active jigging to attract fish, but when his flasher shows one sniffing, he’ll slow the bait to a nervous quiver.

“The flasher’s definition will also show you the biggest fish in the school,” he says. “That allows you to fly past the little fish and target the bigger ones.”

For this Floridian, standing on a frozen lake took some getting used to, but my last late-ice trip saw a comforting 3 feet of rigid frigid. Throughout the season, the Minnesota DNR defines ice safety with this scale:

Back up these guidelines with safety equipment:

Ice fishing for panfish can be as laid back or as serious as you want to make it. But to catch big bluegills and crappies consistently you’ve got to be dialed in. The right gear combined with these tactics will put more fish on the ice.