Late in the winter, big pike begin their migration from deepwater wintertime haunts to shallow spawning bays, providing anglers with their best opportunity to catch them 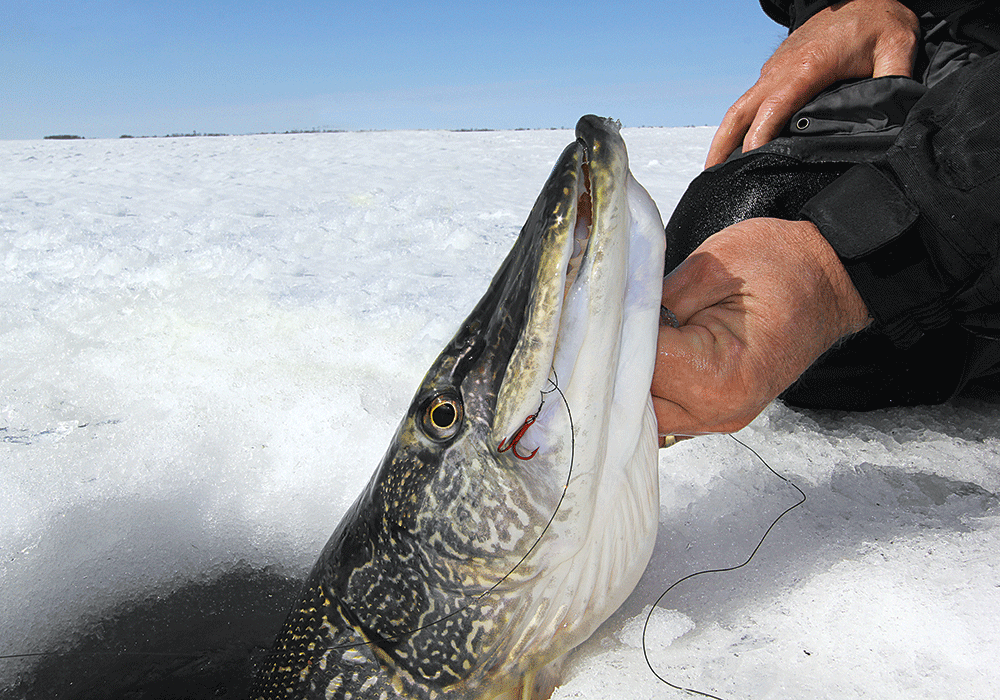 When you are standing on an ice sheet that’s 36 inches thick, it seems absurd to think that spring is in the air. But it was. And I could feel it. It was the last week of March, and Pete Palony and I had planned our trip to Minnesota’s famed Lake of the Woods to be here at this precise time. This sprawling inland sea is home to massive numbers of huge pike.

The first flag went off a half hour into the day. A pike attacked a live sucker pinned 6 feet off the bottom in 14 feet of water. Within minutes, 14 pounds of thrashing fish hit the ice. We released it after a couple of quick photos.

Then one of the cisco-baited tip-ups went off. I set the hook, and it felt as if I was tethered to a moving truck. The fish exploded in an impressive run; for a few seconds I worried that my 50 yards of main line might not be stout enough.

The pike made three long runs before I could coax its massive head through the 10-inch hole. When the tip of its nose appeared out of the slush, I reached in to grab a gill plate. You have to stand up to lift 44 inches of pike from a hole in the ice.

How to Find Pike

Although one look at a pike’s toothy maw confirms that it evolved to feed on other fish, here’s what you may not know about northerns: They are scavengers that feed on dead stuff, too. And in late winter, there are plenty of dead things in the shallow back bays of lakes that see oxygen levels plummet over the long winter.

Embracing this part of pike behavior was difficult for me. As I learned to target big pike, however, I started to understand the significant differences between hammer-handle fish and studs.

The use of underwater cameras like the Aqua-Vu Micro AV has accelerated my learning. For example, I’ve discovered that big pike are attracted to vertically jigged rattle baits and will travel hundreds of feet to investigate them. Flutter spoons are similarly enticing. These thin spoons are very popular with the Great Lakes trollers that target trout and salmon. Unlike traditional spoons, these light baits sink slowly on the drop, attracting pike as they flutter down. Rig these lures in tandem with live or dead baits.

Both dead and live baits produce below tip-ups. A quick-strike rig will not only allow you to safely release fish, but it will also greatly improve your strike-to-hookup rate. I use 40-pound fluorocarbon for my leader, with about 30 inches between my main line and the bait. Smaller trebles—I use No. 4 almost exclusively—offer better landing rates than larger ones. Thin, uncoated seven-strand wire is also a popular leader material for preventing bite-offs by toothy pike. Most anglers I know use 18- to 27-pound-test to build their rigs.

I like a thick, strong main line for giant pike. You don’t need 50-pound-test to land them, but heavier lines are easiest to handle with cold, wet hands. Berkley’s Gorilla Braid is made with both Dyneema and Dacron, and it offers the best characteristics of both. It not only sinks, but it’s also easy to control and can withstand the sharp edges that form around ice holes.

You can catch the random pike by throwing out a tip-up almost anywhere you catch panfish. But if you want to consistently catch bit pike, follow these tips.

READ NEXT: Pike Spearing: How to Spear the Biggest Pike of Your Life

Let the Big Ones Go

Pike, especially winter pike, are excellent eating fish. But plan on letting giant pike go. Have a jaw spreaders and fishing pliers ready to go for a quick release. Large female pike are top breeders and it pays to have large predators in a fishery. Plus, the mid-sized pike, in the 24- to 28-inch range, are better for eating anyway. If you’re stuck catching small pike, consider pickling them with this pickled pike recipe.