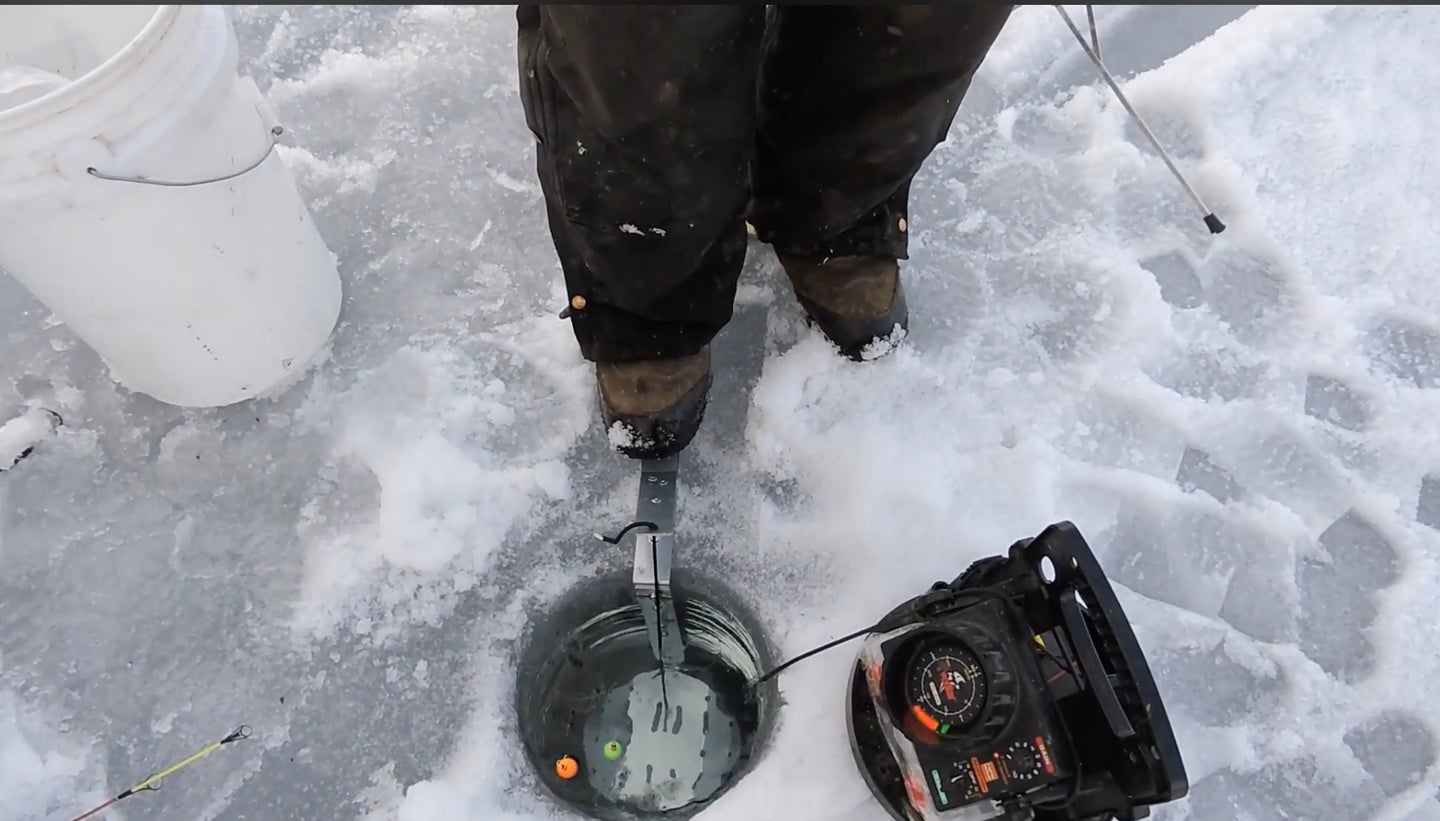 Minnesota angler Jim Dresch’s dream of hitting it big in the fishing tackle industry has taken a significant step in becoming a reality. Dresch, according to the Echo Press, was recently issued a patent for an invention designed to make sure you bring home your limit every time you hit the ice. But this isn’t a lure or electronic equipment. Dresch essentially created a trap door that you spring as soon as your catch enters the hole.

This is, no doubt, a make-or-break moment in many hardwater scenarios. Whether there’s four inches of ice or two feet, fish just have a nasty habit of coming unglued in those final few seconds. Nets are not much help, but Dresch’s invention, which he’s dubbed Grandpa Jimmy’s Ice Hole Trap, blocks the escape route, giving you a change to recoup the catch if that hook pops out. It’s hard to deny that on the surface, the Ice Hole Trap has merit and function, but it also leaves me wondering if gadgets like this will ever become standard in ice fishing, because Dresch’s creation certainly isn’t the only ice gizmo.

Read Next: The Best Ice Fishing Shelters, Tested and Reviewed

Gadgets and doohickies have flooded the fishing market for decades. The most recent that comes to mind is the Chill-N-Reel, a beer koozie with an attached spool that allows you to fish in the most primitive sense while knocking back a Bud Light Straw-Ber-Rita. It’s cute and it made a nice stocking stuffer, but I swear if someone sends me one more video of it on Instagram, I’m going to lose it. I mention this product because it backs up something I’ve noticed over the years: open-water inventions tend to lean more towards the novelty and gimmickry side of things.

Take, for example, the TactiBite Fish Call, an electronic device you toss out where you’re fishing. It emits sounds that emulate a feeding frenzy, thus calling in loads of hungry fish. I’m sure the Fish Call was meant to be taken seriously by serious anglers, but I know a bunch of serious anglers … and none of them use it.

Ice fishing, on the other hand, is a sport already riddled with gadgets, many of which have been around so long they’ve become standard kit. Tip-ups, at some point, were a new idea. The evolution of the tip-up is the more recent line of auto-setting rod holders such as the JawJacker. Unlike many of the new inventions that pop up for open-water fishing, it seems that those created for ice fishing are generally created by folks who are serious ice anglers themselves just aiming to solve a genuine problem.

Dresch’s Ice Hole Trap solves a legitimate issue, and I can’t say it isn’t smartly designed. Its height can be adjusted depending on ice thickness so the trap door closes just below the hole. Once you mount it to the ice, all you have to do is get the fish in the hole, depress the foot pedal, and voila! The exit is sealed.

As smart as Dresch’s design is, it does leave me with a couple questions. To my eye, the door in the open position could potentially present an obstacle when it’s not blocking off a fish’s escape route. I’ve spent enough time on the ice to know how simply not clearing your transducer cable fast enough can lead to headaches. But using the Ice Hole Trap means a lot of snaggy metal in the hole at all times. Dresch appears to market the product specifically to anglers chasing crappies and yellow perch. Whether it would function the same or be as useful with, say, big lake trout or walleyes, I’m not entirely sure. But I do believe Dresch has identified enough of a market that Grandpa Jimmy’s Ice Hole Trap could become critical to every panfisherman on a frozen lake.

The same cannot quite be said of Ed’s Bait Transporter.

In a nutshell, Ed’s Bait Transporter is a wooden board powered by an aquarium pump. There is a downrigger release clip positioned at the rear of the board, and the idea is you slip the contraption through the hole, and it moves in a wide circle just under the ice. Theoretically, it allows you to place baits in a wider area around a single hole, thus covering more water. It also appears in this video (below) as though you might also be able to use it to troll under the ice.

My gut reaction to the Bait Transporter is that it’s attempting to make ice fishing feel more like open-water fishing. While I give the inventor some innovation points, it seems to me it would just be easier to drill a bunch of holes than deploy the current version of the Transporter, which requires power and a very long, thick cord … which I could see causing huge tangles if you did, in fact, troll up a massive pike under the ice while the device was ranging 50 feet from you.

But Ed’s Bait Transporter also provides food for thought. While the present model may seem a bit silly, is this where ice fishing is headed? There is already argument over modern cameras and electronics making the sport too easy. A decade from now, will we be running baits under the ice with sonar equipped drones? And when we connect, will every ice fisherman be sealing the deal with an automatic, laser-tripped Grandpa Jimmy’s Ice Hole Trap Version 5.0?