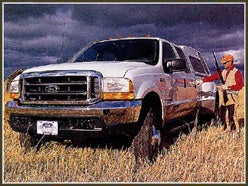 When I first got a look at the 2002 Chevy Avalanche at a trade show, I immediately thought, “gimmick.” And when a test model pulled up to my house nine months later, my opinion hadn’t changed. But I set my objective-journalist jaw firmly in place and took the vehicle out on highways and trails rough enough to expose any weakness. And at the end of the day, when I stopped long enough to think about it, I realized that not only was I enjoying myself, but I really liked this new SUV/pickup.

The concept behind the Avalanche is similar to what Ford wasthinking when it brought the Explorer Sportrac to market: make a vehicle that delivers the passenger comfort of an SUV and the cargo room of a pickup. But the Avalanche isn’t a compromise; it can change from an SUV to a pickup in minutes. The Avalanche, which is built off the Suburban’s platform, has what Chevy calls a “Convert-a-Cab System.” The passenger compartment/cargo box divider has a removable rear window, a crossbar and a folding “Midgate,” all of which are located behind the rear seat.

With the Midgate up, the Avalanche cargo box is 50 inches wide and 63 inches long. Fold down the rear seats and Midgate, and the rear passenger area becomes a cargo box with a length of 97.6 inches. After a couple of practice rounds, I could put the Avalanche through this SUV-to-pickup metamorphosis in about 45 seconds.

The Avalanche comes with a three-piece cargo cover that latches in place over the cargo box. With the cover installed, the Midgate down and the rear window in place, the entire cargo box and rear passenger compartment is tightly sealed. (We tested this feature with a hose and, indeed, everything inside stayed dry.) Chevy also offers accessories such as roof racks.

An outdoor life editor who took the Avalanche on a weeklong trip says, “Two adults and two kids fit easily along with our big wall-tent, sleeping bags, cooler and all of the kids’ stuff. The optional hitch-mounted bike rack was beefy enough for all of our bikes and we liked that it folds down to allow the tailgate to drop.”

Powering the 1500 series Avalanche is the Vortec 5300 V-8 engine and the electronically controlled 4L60-E four-speed automatic transmission. It’s a strong engine/transmission combination for this vehicle class. (A trailering package featuring a hitch platform, seven-pin connector and trailer brake harness is standard.) The downside is that the Vortec 5300 V-8 drinks a gallon of gas per 13 miles in the city and 17 miles on the highway.

Four-wheel-drive models come with the Autotrac active transfer case, which allows the driver to switch between 2HI, Auto 4WD, 4HI, 4LO and neutral with the push of a button. The Auto 4WD feature kicks the 4WD into action when the rear wheels slip.

So the “ultimate utility vehicle” (as Chevy is calling it) is no gimmick after all. Yes, the stylists went overboard with all of that gray plastic body molding, but when it comes to function and versatility, the Avalanche sets new standards in the growing SUV/pickup hybrid category.