Mounting a Scope on Your .22 Rifle 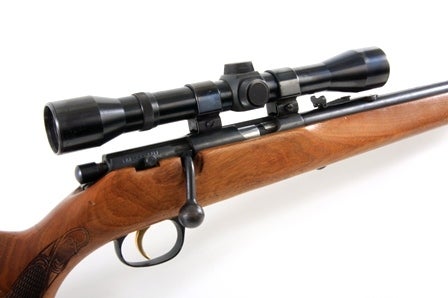 On a shelf above my cluttered desk is a book that was favored reading when I was an innocent lad. It’s a Shooters Bible, published in 1956, and on the cover is a crouching tiger. The pages are worn and yellowed by time, but still there are days when I turn to those pages again, dreaming the dreams of a half century ago. A Model 21 Winchester cost less than $400 back then, and a sleek Mannlicher carbine could be had for about $200.

Considering my finances at the time, my chances of owning such a rifle or shotgun were about the same as owning a yacht, but something I actually could buy was a telescopic sight for my single-shot .22 rifle. (It was actually “family” property, used mainly for killing hogs and blasting possums out of trees, but since I was the only one who cleaned the bore and oiled the bolt I considered myself the primary owner.)

Like most boys, I regarded telescopes and binoculars with wonder. The optical arm that reached across space and brought distant objects close was little short of magical to me. Combining this magic with the deadly reach of a speeding bullet was a concept that rocked my imagination.

Right there on page 299 of the Shooters Bible was a Weaver scope costing, complete with mount, only $9.75–almost exactly the amount of hard cash I’d saved for such a purchase. But on that same page a quandary presented itself: The $9.75 scope was of only 4X magnification, but a similar scope of 6X power could be purchased for $12.50! For less than three bucks more, I could have a scope with half again as much power, which presumably would make any target I shot at appear bigger and easier to hit and extend the effective range of my rifle. Wow!

So I bought the 6X scope, and in doing so innocently committed what I’ve come to call the “Three Sins of Rimfire Scopes.”

The most grievous of these sins is thinking that lowly rimfires don’t deserve much in the way of scopes, because we’re not going to shoot anything important with our little “twennytews” anyhow. Which, when you think about it, follows the same line of reasoning that says a crippled chap doesn’t need good crutches because he can’t run very fast anyhow.

The simple fact is that we deserve to hit what we aim at with a .22 the same as with any other caliber. And the better the scope, the better our chances. A wise and common piece of advice about buying a scope for a big-game rifle is to pay about as much for the scope as you do for the rifle. Why shouldn’t this hold true when buying a scope for a rimfire? Even more so, in fact, because the optical demands of rimfire shooting are actually greater than those of shooting at long range with big-caliber rifles.

This leads us to the second sin of rimfire scopes. You can quickly demonstrate the optical challenge of scoping a rimfire with your binoculars: Focus on an object at, say, 100 yards. You’ll see that the binos remain in reasonably sharp focus as you look at optics at greater distances, much the same way the scope on your big-game rifle works. But when you look at closer objects, the focus becomes fuzzy. And the closer you look, the worse it gets. Now refocus your binoculars at about 10 yards. What you discover is that the short-range focus is so critical that you are out of focus when viewing something only a few feet nearer or farther away.

Of course, I’m not telling you anything you don’t already know, but it’s a clear demonstration of the optical problems encountered when scoping the rimfire because we usually shoot a smallbore at close ranges, where focus is critical. This dilemma is made all the more vexing because we tend to shoot our rimfires at constantly changing distances—when squirrel hunting, for example. So what can we do?

One solution is simply to use low-magnification scopes. This is because lower-power models have greater depth of focus–meaning they are more forgiving–than optics of higher magnification. We can see this at work with a variable-power scope simply by setting it at low magnification and seeing how the close-distance focus is sharper than at the high end of the magnification range. This, of course, is why scopes made specifically for rimfire use are almost always of modest magnification, usually 4X or even less. It also explains my “sin” of opting for the little 6X rather than the 4X so many years ago.

Does this mean that we’re to be forever handicapped by low-power scopes on our rimfires even though higher magnification would be both desirable and beneficial in many shooting circumstances? Not at all. Scopes have come a long way since I bought that little Weaver and there now exists a selection I never could have imagined.

The catalogs of just about every maker or importer of telescopic sights list dedicated “rimfire” scopes. While many of these are excellent, they also tend to reflect an outdated mindset that only a certain, limited type of scope is fit for use on rimfires. Shooters who are serious about their rimfires, however, are increasingly ignoring this paradigm and thinking in terms of centerfire scopes. This has long been true of rimfire benchrest and target shooters who use the same scopes as their centerfire counterparts, but shooters whose ambitions range more toward punching holes in beer cans are discovering that some scopes made for centerfire rifles not only look and work beautifully on their rimfires but also eliminate optical problems such as close-range focus and magnification limitations.

Scopes with an adjustable objective (AO) lens can be sharply focused at close, rimfire distances, and when this feature is combined with a variable-X scope you have the best of all worlds. Set the magnification at the power you want, focus the AO at the range you’re shooting and you have a crisp, parallax-free sight picture. Peruse some catalogs and you’ll find that these features can be had in some petite scopes that are perfect for rimfires.

The third sin we often commit when scoping rimfires is the dismal way we attach them to our rifles. The rifle of my boyhood had no provision for mounting a scope, and the contraption of a mount that came with the scope would have challenged the skills and patience of an experienced gunsmith.

Happily, virtually every rimfire rifle made today, and even some pistols, comes pre-drilled or dovetailed for scope mounting. In fact, if I were buying a rimfire rifle, one of the criteria guiding my choice would be the rifle’s scope-mounting options.

When you buy a mounting system for your rimfire, it’s a good idea to think in centerfire terms. Most makers offer base-and-ring sets for drilled receivers, or rings that clamp on a dovetailed receiver, that are fully as sturdy and good looking as those made for big-game rifles. Talley (803-854-5700; talleyrings.com), for example, not only makes stylish clamp-on rings, but also offers them in different heights. It even offers different configurations to match the curvature of different receivers. The other top-end systems cost more, of course (about the same as you’d pay for good mounts for your deer rifle), but it’s money well spent in terms of strength, accuracy and appearance.

For the record, and you can quote me on this, I predict that we are about to see a revolution in rimfire scopes. Hot new rimfire cartridges such as the .17 HMR and .17 Mach II, with more like them to come, stand in need of improved focusing and magnification flexibility in scopes in order to take fuller advantage of their range and varied applications. Scope makers will have to go back to their drawing boards to meet these demands, so don’t be surprised by a new generation of “rimfire” scopes having such handy features as fast-and-convenient focusing knobs on the side of the tube and a greater range of magnification.

1. BURRIS 3-9XPA This handy compact from Burris is lightweight and features click adjustments and an adjustable objective lens that allows parallax-free focusing as close as 7 yards-ideal for .22 rifles and air rifles.

2. LEUPOLD VX-I 2-7X Leupold’s compact VX-I is prefocused and parallax-free at 60 yards, making it a fine choice for rimfire rifles. Like all Leupold hunting scopes, it is waterproof and comes with a lifetime guarantee.

3. KAHLES 2-7X36 RF One of the trim American Hunter series of scopes made by the famed Austrian optical firm, this scope is designed for short-range rimfire shooting and is parallax-free at 50 yards.

4. BUSHNELL BANNER 4-9X AO This high-power variable offers a lot of features for your dollar, including an adjustable objective. It comes with rings, and the target-style adjustment knobs will appeal to long-range plinkers.

5. LEUPOLD VX-II 3-9X This 33mm variable offers great versatility in a compact package. The adjustable objective allows it to be fine-focused and parallax-free for close-range shots at squirrels and other small game, or for longer pokes at prairie dogs and other varmints.

Three Ways to Mount Up

1. Talley rings on this Anschutz rifle are extra high to mount large-objective varmint scopes. They’re also machined to fit the curved receiver for a custom look.

2. The Leupold rings on this Marlin .22 clamp directly to a dovetail base or grooved receiver and have the “grown up” look of their high-power rings.

3. Tip-off mounts, like the sturdy lever-release rings from Warne on this Ruger 10/22, allow a quick switch from open sights to scope without losing your zero.

Everyone Needs AO An adjustable objective (AO) allows you to set the magnification at the power you prefer, then set the range for the distance you want to shoot for a crisp, parallax-free sight picture.