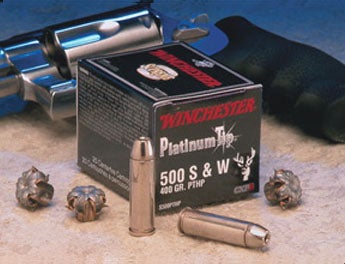 Trends in the ammo business continue on the fast and hard-hitting track. This year should bring some intense shotshell loads in the waterfowl category, with more price-sensitive options in the nontoxics. Centerfire ammo continues to get fatter and faster, with even more offerings for home safety and law enforcement. This translates to a greater selection and more reasons for your customers to buy some new ammo in ’05. Here’s a look.

Winchester Ammunition
When you decide to offer the most powerful production handgun cartridge in the world, you better have a bullet up to the task. Winchester has it-the new 400-grain Platinum Tip Hollow Point. This heavyweight for the 500 S&W; delivers massive knockdown power on big, dangerous game. SRP: $43.82.

Sierra Bullets
Sierra will add two new bullets to the popular BlitzKing line for 2005, ideally suited for the .204 Ruger and other .20-caliber cartridges and the .20 Tactical.

Remington
Late-season pheasant hunting can test the skill, patience and especially the ammunition of the serious upland hunter. New for 2005, Remington has tilted the odds in the hunter’s favor with the new Nitro Pheasant shotshell loads.

Nosler
Like most companies in the bullet business, Nosler’s Ballistic Lab has provided custom ammunition for some of the biggest names in the shooting industry for years.

Now, how would you like to tell your best customers that they can get the same loads used by their favorite shooting and hunting writers? Imagine them walking into elk camp and telling their buddies, “I’m shooting the same loads as Jim Zumbo!”

[pagebreak] Hornady
There was a time when hunting deer with a shotgun slug meant close shots only. Those days are over. Hornady’s SSTTM Shotgun Slug transforms your favorite rifled-barrel slug gun into a weapon that will outperform some centerfire rifles. The Hornady Shotgun Slug allows you to bring unheard of accuracy and terminal performance to slug-only areas.

The accurate SSTTM bullet delivers sub-two-inch groups at 100 yards with the flattest trajectory on the market. The polymer tip of Hornady’s field-proven SSTTM helps it slice through the air, minimizing drop and wind drift. And when the bullet strikes its target, the tip initiates violent expansion, transferring its energy payloaad to ensure a swift kill. Booth #627. (800-338-3220; www.hornady.com)

Last fall on a duck hunt in the Dakotas, I had the pleasure of shooting several boxes of Ultra-Shok High Density Tungsten waterfowl loads from Federal. It would not be an exaggeration to call them devastating.

In fact, they were hardest-hitting waterfowl loads I’ve shot to date, and they have the ability to consistently fold ducks at a distance past 60 yards. Statistically, the HD shells deliver twice the energy of steel loads at 50 yards.

The new loads are 3.5 times softer than tungsten-iron yet have the equivalent density. They also manage 20 percent more payload than the previous 11/8- to 13/8-ounce loads, have guaranteed uniform pellet size and perform with 15 percent less wind drift than steel shot.