Knowing your rifle's point-blank range is the key to better shooting. 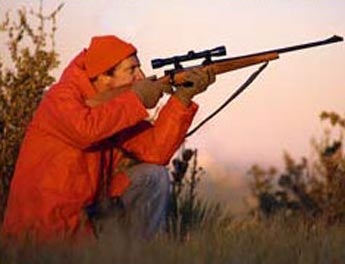 When we line up our sights on a big-game animal, we’re confronted with three distinct problems that we must solve in mere moments. First, there’s the ever present challenge of accurately aiming at what we want to hit. Next, if the range is much beyond 100 yards, there’s the matter of estimating (guessing) the distance. And third-perhaps the toughest challenge yet-we must translate the estimated distance into where the bullet will hit in relation to where we’re aiming: “Let’s see now, I’m sighted-in, so the bullet hits two inches high at a hundred yards and that buck looks to be about two hundred to two hundred and fifty yards. Should I hold over or under or where…?”

Add to this the complications of a moving quarry, or the urgency of one about to move, your pounding pulse, wheezing lungs, being partially blinded by blowing snow or rain-or a combination of all these distractions-and it’s pretty clear that we suddenly have a lot on our minds all at once and only the briefest of moments to make critical, hit-or-miss decisions. Wouldn’t life be a lot simpler if we could remove both range estimating and trajectory calculations from the hunting equation and focus almost all our concentration on accurate aiming and trigger control? Actually, we can just about do that by using a little-known ballistics trick called point-blank zero (PBZ).

The Physics of PBZ In some shooting circles, “point blank” means up close and very personal, in other words too close to miss. But in the lingua franca of ballistics, the point-blank range of a cartridge is the maximum distance out to which the bullet will hit a target of a specific size. This might sound a bit complicated, but it’s not. It also might sound rather imprecise, which to some degree it is. Imprecise, that is, compared with the precision we’re accustomed to in the ballistics charts supplied by ammo makers and the accuracy claims of gunmakers.

If ammo makers were to advertise a load guaranteed to group within a 10-inch circle at 100 yards, we’d all have a good laugh. However, if the manufacturer guaranteed that the same load would hit the vital zone of a whitetail buck all the way out to 260 yards, without any need to aim high or low or compensate for trajectory in any way, we’d certainly sit up and take notice.

As it so happens, the 260-yard figure used above isn’t for a razzle-dazzle new magnum caliber, but-get this-it’s the PBZ of none other than the old-timer .30-30 with Winchester’s 150-grain Silvertip bullet! But how can that be when we’ve been brought up to believe that the .30-30 is good for about 150 yards max? Check any ballistics chart and you’ll see that when sighted-in at 100 yards, the bullet will land nearly 8 inches low at 200 yards and twice as low at 250. So what’s the catch?

Shooting Down the Pipe
There’s no catch once we free ourselves from the delusional mind-set that bullets are going to hit where we think we’ve aimed them. When practicing at a club range with a rifle firmly propped on a solid bench and sandbags, and with the precise distance known, it’s no difficult task to drill the center out of the ace of spades. Likewise, with our feet propped up before a cozy fire, ballistics charts read like gentle poetry. But out in the real world where wild animals dwell, our fantasy of “surgical” bullet placement, as one writer used to put it, vanishes like a wisp of gun smoke in a chill New England breeze.

My longtime hunting buddy Jack Atcheson Sr., a big-game guide of legendary accomplishment and the most knowledgeable hunter you’re liable to shake hands with, is often asked the best places to hit various big-game animals. His reply is almost always “anywhere in the eye,” which he then repeats with a big grin. It’s a clever response that usually earns him a laugh, and one I’ve often borrowed. But behind the Atcheson wit there’s a more serious undertone baseed on his broad experience guiding hunters that reads, “Why ask me where to hit it when you’re not likely to hit it there anyway?”

Professional hunters I’ve known in Africa are of the same mind. Spending half the year watching clients’ bullets whiz off in directions wholly unknown to trajectory charts, they tend to be of a pragmatic philosophy concerning bullet placement. “Get your bullet somewhere in the vital zone,” they’ll advise you, “and the animal is yours.” Their catchphrase for this is “shoot for the brown,” meaning aim for the center of the animal’s front half.

This maxim, though not as refined, captures the essence of PBZ, which is also known as optimum-trajectory zero and even pipe zero, or pipe shooting. The pipe referred to is an imaginary one of a specific diameter, and perhaps provides the best way to describe PBZ: Imagine that you’re shooting your .30-30 inside a long 10-inch diameter pipe. You adjust the sight so that the bullet just touches the top of the pipe at the apex of its trajectory (the point where the bullet’s trajectory is highest with respect to the line of sight) and thereafter curves downward until it hits the bottom of the imaginary pipe.

But why a 10-inch pipe? Because that’s about the size of the vital zone (heart and lung area) of a pronghorn or smallish whitetail. As you’ve no doubt surmised by now, the .30-30’s 260-yard PBZ mentioned earlier is based on a 10-inch vital area or “pipe.” In hunting terms, this means that throughout the .30-30’s entire 260-yard PBZ range, the bullet will hit within 5 inches of where you aim (mostly much closer), and by simply aiming at the center of the vital area you’ll have a well-placed shot in the lungs, heart or both. Of course, for bigger game with larger-diameter vital areas, the point-blank ranges become considerably longer (see chart). If, for example, you use a conservative 12-inch vital area for elk and you’re hunting with a 7mm Remington Magnum rifle loaded with Remington’s 150-grain Swift Scirocco bullet, the PBZ is a whopping 409 yards! Also keep in mind that a PBZ allows some “no-think” leeway for wind drift. Don’t let me give you the idea that PBZ is without certain problems of its own, however.

One Aim Hits All
Hunters who have long been in the habit of aiming at a specific region, such as the heart area, or those who always zero their rifles a certain way-2 inches high at 100 yards, for example-might be put off by the comparative extremes necessary in sight settings. But for hunters who simply want to cleanly kill game with the least possible fuss and bother, point-blank zero might seem a gift from Nimrod himself. It might also make us wonder why PBZ is almost never discussed or written about. Calculating PBZ before the age of computers required a bit of arithmetic and test firing, which is certainly one reason it is little known. Professional ballisticians have long used it, yet PBZ never appears on published ballistics tables. (Perhaps ballisticians have wanted to keep such a good thing to themselves.) But now that the cat is out of the bag, wouldn’t it be great if ammo makers printed the PBZ on their ammo boxes along with other performance data? We at Outdoor Life take credit only for introducing it to our readers, plus the time and arithmetic necessary to produce the accompanying chart. Anyway, it’s much too good a shooting concept not to be tried, especially these days, with the growing emphasis on long-range shooting. PBZ might at last be an idea whose time has arrived.