If you’re looking for a side-by-side that will climb, operate in inhospitable terrain, and do it with a high-carrying capacity... 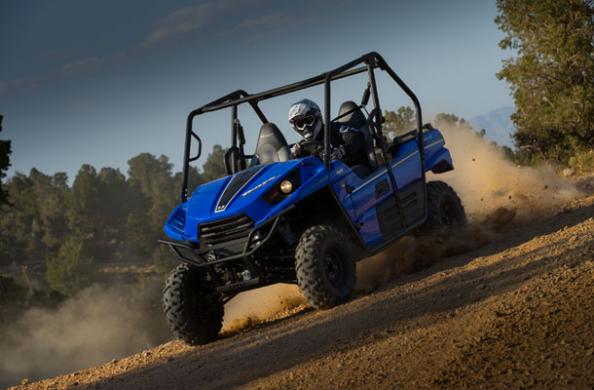 If you’re looking for a side-by-side that will climb, operate in inhospitable terrain, and do it with a high-carrying capacity and serious suspension comfort, then Kawasaki’s new 2014 Teryx 2-seater has the “right stuff.”

I traveled to the steep and rocky roads of the Hatfield and McCoy Trail System in West Virginia in mid October to test the 2014 model. It’s clear that Kawasaki is committed to the performance side-by-side market. If you go back to my review of the 2014 Teryx4 LE, you’ll find I was overwhelmed by the total conduct of the unit. Its fine-tuned trail ride arguably puts it as the overall performance leader in the “more-than-two” capacity side-by-side market.

Before we even talk about the suspension and drive train, you should know that as of a few weeks ago, the Teryx and Mule lines now come with a comprehensive three-year warranty. In my mind, the warranty is a testament to the heavy-duty frame, an intuitive performance suspension, and a v-twin high output motor that has really stood the test of time.

Yes, it’s fast, comfortable and a pile of fun to drive, with plenty of smart performance engineering attributes. One of the things I was most impressed with was the smart downhill braking. Dialed into low with the diff on and you’ll crawl down the steepest hill you can drive on. The higher speed engine braking doesn’t slow you down too much; just enough to get you to the bottom of the hill safely. Speaking of brakes, I could not get them to fade even when standing on them and coming to a hard stop at high speed. The steel shield lines do not expand and feel better than the brakes on my 6,000-pound Chevy.

The digital fuel injection is going to give you fuel-sipping economy at more than 20 mpg. The 783cc v-twin pushes out 12 percent more torque over the entire power curve, with an impressive 26 percent more power at low and mid range speeds. As for climbing, the locker is beast-like — it can do anything you have the guts to try.

The cargo considerations are well thought out. There is a large space behind the seat for bags and small coolers. Underneath are two dry-sealed compartments that will hold up to 48 gallons of gear. The gas-assisted bed tilts with one hand. As for your passenger, legroom abounds for the go-large 6-foot plus buddy that used to play college ball.

The steering is impressive at low speed and tightens up smartly as you move quickly. I purposely hit a lot of wrenchingly bigger rocks than you would ever attempt in normal driving and received no feedback. Like the 4-seater, the Fox racing shocks and trailer arms are industry, state-of-the-art outside of the racing community.

I felt little compromise in the machine’s handling at medium to lower speeds even after adding 400 pounds of cargo to the bed. It is rated up to 600 pounds.

While highly impressive, the 2-seater is not as smooth-driving on fast, large rock trails as the 4-seater. However, I attribute that to the Teryx4’s longer frame length and wheel base. The new unit is also quieter, but I wouldn’t say quiet.

With all this crazy racing performance and high-carrying capacity, the base model price is relatively reasonable. You’ll get all the high performance (EFI and EPS) with a plastic roof for $12,999. Now, you could get some cool paint, and or camo with a roof and aluminum wheels with the LE or Camo, models for between 14-15 grand. However, there’s killer value in the base Teryx 800 FI 4×4 EPS and that’s where I would spend my scratch.