A Gear Test of the 6 Best Hunting ATVs 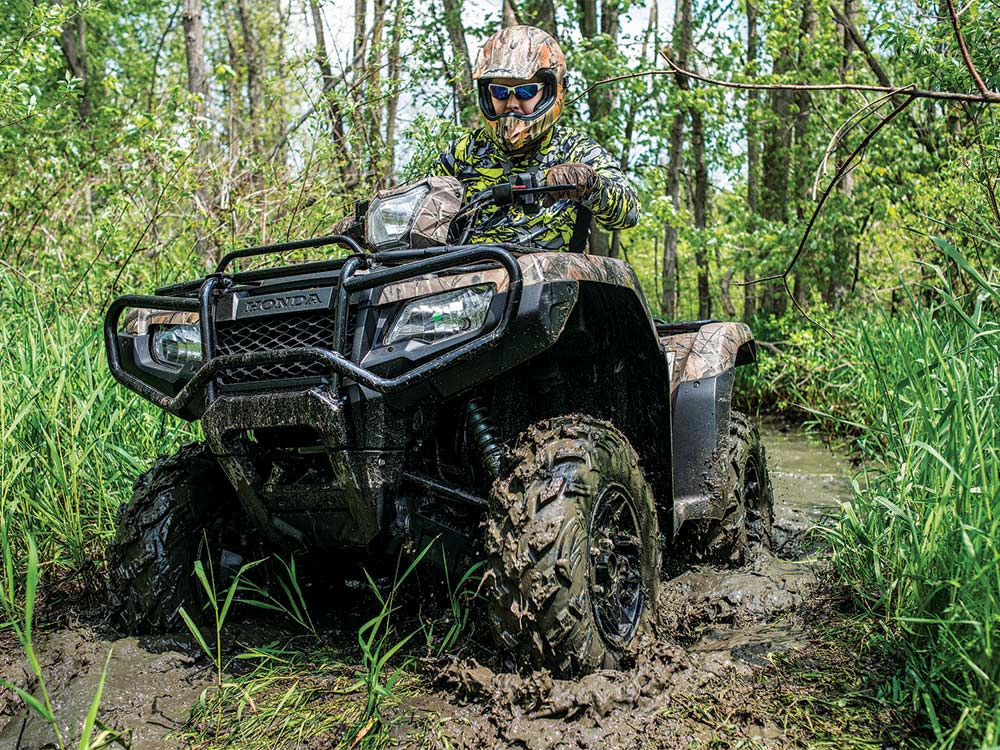 There are few pieces of outdoor gear that cost as much—or are intended to be kept in service for as long—as ATVs and UTVs.

The world of utility vehicles is far larger than it once was, and this year’s ATV and UTV test was a testament to the breadth and depth of the field.

Our mission was simple: Find the units that are the best fit for those who work and play in the outdoors.

We evaluated tech-laden units that boasted features and gadgets not dissimilar to those found in high-end cars and trucks (with price tags to match), and we checked out basic work-focused utility vehicles that made up in value and function what they lacked in bells and whistles.

All told, we put a field of 18 new ATVs and UTVs to work in southern Michigan’s farm belt and discovered a crop of machines more capable, more refined, easier to use, and, yes, more fun than what was available just a few years ago.

After ripping through the test course’s mud hole, we needed a pit stop to hose the muck off this ATV. And not just because we wanted to clean the unit up for photos. We wanted to make sure we’d read the engine size correctly. In a field of the highest-powered machines, the Brute Force 750 EPS blew the others away and ran off with the Editor’s Choice honors while doing so.

The amount of torque throughout the power band of this unit stunned the test panel. Hit the throttle from a standstill and you’d best hold on, because you could find yourself up on two wheels in a hurry. The four-wheel-drive system with rear differential lock engaged crisply. The independent suspension front and back earned high scores in the ride category as well as handling.

With a snappy response and excellent build quality, Can-Am’s Outlander DPS 570 gobbled up every challenge we could throw at it, and did it without excessive noise or vibration.

The Outlander includes Can-Am’s Dynamic Power Steering system, an outstanding feature that provided crisp, accurate response on the course. Our test unit came with the Mossy Oak package, adding $3,000 to the price, which hurt its value scores a bit and put it just behind the Brute Force 750. Take off the add-ons and you have a base unit with an MSRP of $6,799 that’s a heck of a value.

The Grizzly garnered plenty of praise for its solid, work-focused performance. With a 708cc fuel-injected engine, the unit trailed only the Brute Force in power and torque considerations.

It earned respectable marks for its overall build quality as well as its handling and ease of use. We found little fault with this machine, which contended for Editor’s Choice but couldn’t quite match the Brute Force in raw power.

As with other ATVs in the category, on-board storage was lacking, but front and rear cargo racks were included.

If you’re looking for a big, burly ATV, this is your machine. It stands nearly 50 inches tall, and is 46 inches wide and 86 inches long. Powered by a beefy V-twin engine capable of producing up to 78 hp, the Outlander XT 850 has plenty of power and an eye-catching design.

On the course, its quality of build and layout stood out. But all was not perfect. We encountered a couple of instances of belt slip when the machine had to work hard in high range, like climbing over downed logs. The ride received mixed reviews—some loved the softer feel, others not so much.

When we rolled this six-wheeled beast off the trailer at the test location, there were a few snickers. Then we drove it, and the scoffing stopped. The machine’s additional axle makes it significantly longer (and louder, which cost it some key points) than the others in this category, and testers initially worried that the length would make the machine too unwieldy in the woods. But by the end of the first run around the course, those fears were allayed.

The Big Boss proved surprisingly nimble, thanks to its power steering system. Yes, the additional length does make for a larger turning radius than that of a standard two-axle machine, but the difference was less noticeable in the field than expected. And that extra axle creates room for a second rider.

This is a true six-wheel-drive vehicle—­­we could not find any terrain or obstacle to stop it.

The Big Boss 6×6 fills the void between ATVs and UTVs. With an MSRP of $10,999, it’s not inexpensive. But its vastly superior storage capacity, all-terrain capability, and potential utility over other ATVs tested made it the unanimous choice for Great Buy honors. 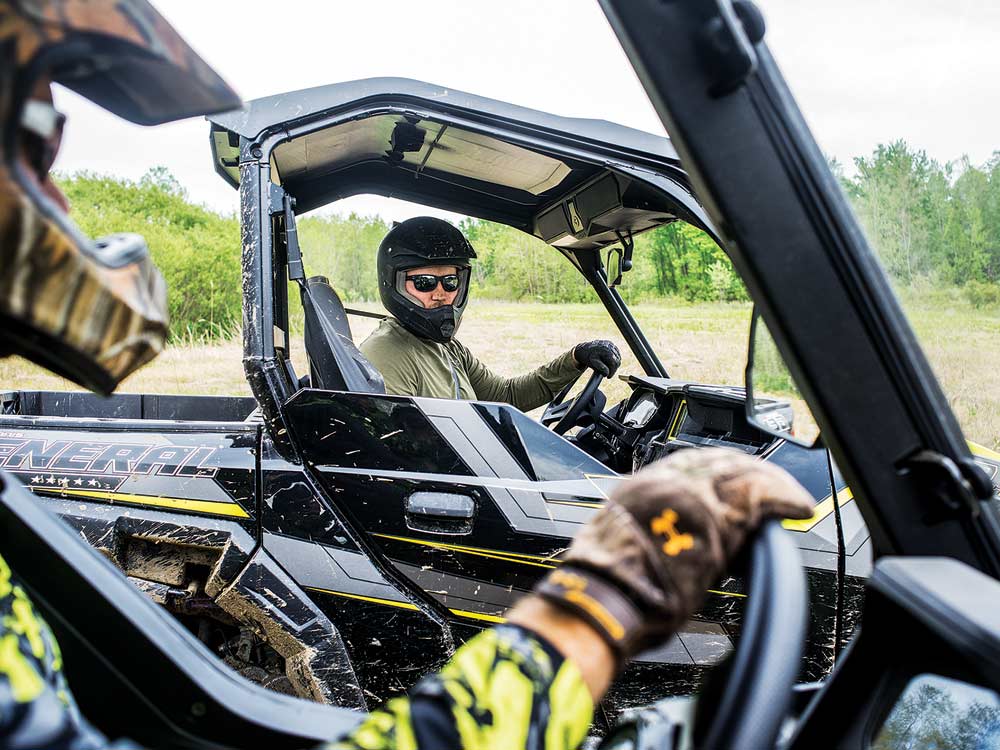 The 12 Best UTVs for Hunters

Honda’s Rubicon DCT EPS Deluxe proved to be a solid, work-­focused unit with a few hits and a few misses. The machine—which features electric power steering, independent rear suspension, and a 475cc single-cylinder engine—was a pleasure to ride and handled our course’s rutted mud tracks as well as the rock pile with similar ease, so long as the manual shift paddles were employed.

When relying on the unit’s automatic transmission, riders felt the engine shifted into higher gears too quickly, thus robbing the machine of power. Its lever-activated reverse also cost it points.

How We Test: The 18 Best ATVs and UTVs for Hunters

There’s no shortage of technical information and data available for the units featured in our ATV and UTV test. But those specs, details, and schematics simply don’t tell us what we really want to know: Which machines best serve our needs in the field?

With that in mind, we evaluated units on working farms where we hunt whitetails, turkeys, small game, and waterfowl. Our primary course was a 1.3-mile loop covering open ag fields, rolling hardwood timber, and thick, nasty swamplands. A second route included a pair of tight hairpin turns. Record rainfalls leading up to the test dates ensured plenty of mud and muck. Storage was evaluated by loading each unit up with treestands, sprayers, trail cameras, and other hunting gear.

Noise levels were recorded by placing an electronic decibel meter 6 inches from the vent of each vehicle’s tailpipe. Readings were taken at idle, 10 mph, and 20 mph during operation on the 1.3-mile loop course, in order to minimize variations in tire and environmental noise. In-cab sound levels were recorded while a passenger held the decibel meter at shoulder height.

Ground clearance was measured with a driver (who weighs 192 pounds) in place and the vehicle parked on a concrete slab. A flexible tape measure was employed to measure the distance between the concrete and the lowest portion of the vehicle.

Top speeds were verified with a pair of handheld GPS units.