Welcome to The Super Shoot, where the world's best riflemen gather to chase the Holy Grail of rifledom: The Clean Hole 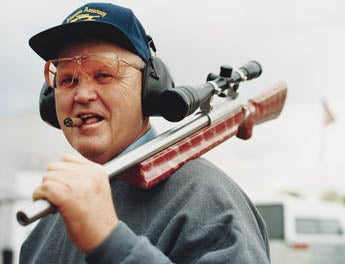 Oh, sure, Tony’s been known to sit at the range from daylight to dark, peering through his scope, waiting for the wind to die down. And some days, that doesn’t happen often. Not more than once or twice. Which means Tony won’t get off more than a round or two that entire day. But sure enough, he’ll be back the next day, doing the same thing. Waiting, watching.

“Isn’t there something, well, meditative about that?” I ask.

Tony rolls his eyes and shakes his head. He doesn’t suffer fools gladly.

Some people think the wind talks to Tony. That’s not exactly true. Still, from all those years spent at a rifle bench, gazing out at the wind flags as they dance and flutter, he does know the intimate whispers of the breeze. He’s learned that gusts are not single notes. They’re refrains that play over and over. So he sits on his stool, trigger finger poised, body still. Waiting until he picks out a pattern. Until he can predict-know-when that perfect lull will be upon him.

It’s the eve of the Firearms Industry Super Shoot, the biggest competition in benchrest shooting, and Tony still has some mechanical issues to work out with his gun. He’s got to talk strategy with the boys. Then it will be time for that most sacred of pre-shoot rituals: the planting of the wind flags. Once the sun goes down, the four-time champion will retreat to his camper to read targets. To study sheet after sheet of flimsy white cardboard stock, divining a logic in the frayed edges of 6-millimeter pockmarks. Figuring out why that fifth shot landed a tenth of an inch to the right of the first four.

Buddha said, “Your work is to discover your world and then with all your heart give yourself to it.” But don’t ask Tony about that. He’s got things to do tonight.

Let the Games Begin
the first competitor shows up at george Kelbly’s place on May 8, a full 17 days before Super Shoot XXXIII begins. By the eve of the competition, the central Ohio farm and rifle range is packed with shooters and their pick-ups, pop-top campers…and guns. Lots of tricked-out guns.

Their owners are mostly rumpled retirees clad in orange glasses and drab clothing. Ball caps and earmuffs. All toting $2,500 guns with $1,000 scopes. They make their way along the gravel road that runs behind the firing benches, like a bunch of hot-rodders cruising Main Street on a Saturday night. Guys trying to look casual, like they don’t give a damn. Rifles slung over their shoulders, every gun decorated in a way that screams, “Look at me!” Intricate geometric patterns, iridescent finishes, stripes and flames. Rich wood grains and faux wood grains, American flags and Confederate flags. Metallic pinks and purples that would put Malibu Barbie to shame. Even a coiled snake that apparently goes by the name of Bad JuJu.

“Take a look at a guy’s gun, and that’s the dream car he never had,” says Kelbly, a barrel-chested bricklayer turned rifle maker. He says this from his office, where a glistening candy-apple-red number sits on display.

Kelbly and his family have played host to this event for 30 years running, and he’s shot in each of the 32 prior Super Shoots. He’s won national and international benchrest shooting championships, but never the Super Shoot. “I’ve always thought the nationals were more important,” he explains, trying very hard to sound like someone who can’t taste the sour grapes.

But his son Jim, who will preside over the next four days of competition as shootmaster, sees things differently. “The Super Shoot is the World Series of benchrest,” he says. “It attracts the biggest numbers by far.” Indeed, nationals-the next largest participation event-usually counts somewhere from 170 to 220 shooters. The 2005 Super Shoot has registered some 330 entrants. And that’s down 10 percent from the previous year.

Whthe popularity? Benchrest shooting is not exactly professional golf, so the minor conveniences offered by the Kelblys-a campground, free electricity hook-ups, egg salad sandwiches on Wonder bread for $2-are as close as many competitors will ever come to the manicured greens and plush accommodations Tiger Woods enjoys when he plays at Augusta National. Plus, the Super Shoot is the social registry of benchrest, a fraternity (and sorority) that counts maybe 500 regular competitors. “All the top shooters are here,” says Jim Kelbly. Indeed, the five highest-scoring members of the sport’s hall of fame will take part in the 2005 contest.

The event attracts not only competitors from across the country but also international shooters, who come from Europe, Asia and even Africa to test their mettle in the rolling hills and swirling winds of North Lawrence, Ohio. Frizza Gien, who’s made the trip from Milan, sums it up. “The Super Shoot is”-how you say in English?-“the Super Shoot. It’s the biggest match in the world.”

One Clean Hole
it’s hard to say where, exactly, benchrest shooting got its start. Certainly, the discipline owes a debt of gratitude to medieval archery contests, where the most skilled bowmen-ala Robin Hood-were reputed to split their opponents’ arrow shafts. With the advent of the rifle came the idea of shooting from a rest (a stationary object) to improve accuracy, and accounts from frontier America tell of marksmen using rests to better their chances of hitting fixed targets at a distance. But it wasn’t until 1944 that the first benchrest rifle association was born. The organization’s ominous-sounding name-the Puget Sound Snipers Congress-belied a more mundane identity: a bunch of guys sitting at benches, shooting at paper targets. Like so many other things, benchrest shooting is best explained not by what it is but by what it strives for: the clean hole. That’s five (or sometimes 10) rifle shots buried in exactly the same spot on the target. It makes no difference where on the target the shots fall. The only thing that matters is how close the shots are to one another.

As the sport’s name suggests, competitors take aim from concrete benches, their rifles perched atop vice-like rests and sandbags for stability. Shooters sit on stools and fire at targets usually 100 or 200 yards away. In competition, they have a set amount of time-typically 7 to 15 minutes-to shoot a group of 5 or 10 shots. Judges measure the distance between the centers of the two shots that land farthest apart.

Benchrest rifles can be divided into two major categories: so-called light and heavy varmint. The guns, most of which shoot 6mm bullets, are essentially the steroid-pumped cousins of highly accurate rifles farmers and ranchers favored for shooting vermin, which benchresters loosely define as animals that are both a nuisance and inedible. (If you want to avoid a lengthy discussion at a benchrest competition, do not engage certain shooters in a discussion of whether skunks are inedible or simply foul-tasting.)

If golf is a game of inches, then benchrest is a game of millimeters. Using micrometers, judges score groups to the thousandth of an inch. Veteran shooters consistently register groups separated by less than a quarter-inch, and most competitions see their fair share of “zero groups,” where all the shots fall within a tenth of an inch.

Still, in its 54 years of existence, the National Bench Rest Shooters Association has yet to certify the fabled “clean hole.” But riflemen have come (almost literally) within a hairbreadth of shooting one: In 1973, Mac MacMillan took five shots from 100 yards that landed less than one one-hundredth (0.01) of an inch apart.

Just about any benchrest shooter will tell you that the quest for the clean hole is exactly that-a quest. But perhaps it’s best that way. After all, when perfection becomes easy, it becomes cheap. Boring, even. Just look at the 300 game in bowling. Golf’s hole-in-one. The “perfect” 10 in gymnastics. No, the clean hole is no more attainable than the Holy Grail or a snapshot of Sasquatch. And that’s exactly what makes it worth chasing.

Action in the Pits
the final day of practice bruises my eardrums, in spite of the tarmac-caliber hearing protection I’ve purchased. Hundreds of shooters take their turns at the range’s 60 concrete benches, filling the air with an irregular drumbeat of blasts. I can-no kidding-feel my heart thrump when I wander too close to the firing line.

At speeds of more than 3,000 feet per second, the shots whistle over rows of colorful “flags”-contraptions made up mostly of pinwheels, flat plates and tails, their parts whirling and flapping in the service of ever-shifting gusts. These devices serve as benchrest’s Rosetta stones, translating invisible breezes into messages that tell competitors how to keep their bullets from straying.

At 5 o’clock in the evening, the range goes still. Looking like refugees from an Easter egg hunt, throngs of shooters venture forth onto the green field for the final planting of flags for the next day’s competition. There’s a lot of hand gesturing, hollering, uprooting and repositioning of bright plastic lawn-duck-wannabes.

Once he’s finished stationing his flags, Tony Boyer looks out over the hurly-burly, his hands pushed down in the pockets of his plaid wool jacket. A retired electrical lineman from Keezletown, Va., Boyer cuts an unassuming figure in a camouflage cap, dark slacks and black orthopedic shoes. His weather-lined face looks older than its 65 years. “It’s not the age, it’s the miles,” he says, unsmiling, in a twang that stretches out all the long vowels. “They’ll tell you, ‘Work outside, you’ll live longer.’ Don’t believe that.”

Boyer walks off, and someone says, “There goes the Arnold Palmer and Sammy Snead of benchrest, all wrapped up in one.” Indeed, Boyer has won all the sport’s major competitions-Super Shoot, nationals, worlds-multiple times, and has scored twice as many hall of fame points (the coin of the benchrest realm) as any other shooter in history. His discipline is legendary, his mystique Yoda-like.

“Tony is the first one to fire a shot in the morning, the last to leave in the evening,” says Manny Garcia, a Florida surgeon who’s competed against Boyer for a quarter century. “There’s a silent wall that separates him from you, me and everybody else.”

No move of Boyer’s goes unnoticed, no technique uncopied. “If Tony put a beer can on the end of his barrel,” Jim Kelbly says, “there’d be 20 guys at the next match with beer cans at the end of theirs.” As the sky dims, most folks head to their trailers for dinner and drinks. Down on “Alabama Alley,” they swig moasy, it becomes cheap. Boring, even. Just look at the 300 game in bowling. Golf’s hole-in-one. The “perfect” 10 in gymnastics. No, the clean hole is no more attainable than the Holy Grail or a snapshot of Sasquatch. And that’s exactly what makes it worth chasing.