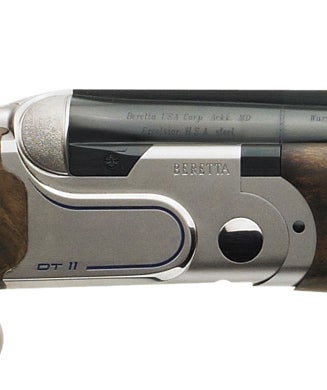 Picking the 9 best shotguns being made today is no easy task. There are some obvious choices like the Remington 870 and the Ithaca Model 37, but this sort of list is bound to ruffle some feathers. So if you’re favorite gun didn’t make the cut, let us know in the comments section.

Tony Galazan makes perhaps the world’s finest over/under and side-by-side shotguns, with prices that can reach six figures, though in recent years he has sought to make shotguns that are more affordable to the average sportsman.

His A-10 American has a full sidelock action that carries all the features of a shotgun 10 times its price. Furthermore, the customer can choose stock length, grade of wood, and engraving — many features usually available only in the rarefied bespoke-shotgun arena.

Even more important: Every bit of the A-10 and Galazan’s other shotguns is made here in America. From $7,995.

Using the 1903 inertia operating design of Danish gunsmith Christer Sjorgren, the Benelli relies on the recoil forces of the fired shell to operate its action. With very few moving parts, these are rugged and reliable shotguns that can shoot shells from light target to 3 ½-inch magnums without adjustment.

When the gun is fired, a carefully calibrated spring holds the bolt head tightly in the battery until the gun stops recoiling, then it unlatches the action and the stored inertia cycles the gun while leaving little firing residue in the action, making for easy maintenance. $1,799.

Designed for clay targets, this gun, preceded by the DT 10, has won many world titles. The action is even heavier and more rugged than that of the DT 10, and the barrels are constructed of Beretta’s proprietary Steelium alloy. With its constantly tapering bore, shooters are using less choke with equal results.

In 2009, Beretta introduced a new gas-operated semi-automatic design that appears to be its semi-automatic platform of the future. Using a new operating system Beretta calls the Blink, it starts with a smaller piston that uses less gas to operate the action.

The A400 will shoot any shell, from light 24-gram Olympic loads through heavy 3 ½-inch magnums, interchangeably without adjustment. The exterior has laser checkering and engraving. The high-strength aluminum action is anodized in colors–green, blue, bronze, or black–or camo-clad for its various specialized applications. $1,755.

All but dead and buried by multiple bankruptcies and transplanted from New York to Ohio, Ithaca is again producing the legendary Model 37. A John Browning design, the 37 loads and ejects through the bottom and has a wonderfully slick pumping action.

The sleek 28-gauge is available in three grades. Built on a light 28-gauge-specific action, it moves on birds as swift as a falcon. Savvy hunters realize how versatile and ballistically potent the 28-gauge is. This lovely little shotgun, complete with screw-in chokes, is an unmatched pleasure in the field. From $999.

Multiple Olympic medalist Kim Rhode shoots one, and so do lots of other competitive skeet and trap shooters. Daniel Perazzi established Armi Perazzi with partner Ivo Fabbri in 1957. Since then Perazzi has sought to make rugged competition guns.

Early on he solicited 1964 trap gold medalist Ennio Mattarelli’s advice. One of the first features incorporated was a detachable trigger group for easy replacement in the heat of a match. The MX8 is available in multiple configurations and gauges for various sporting clays, trap, and skeet disciplines. From $9,861.

A newcomer to American shooters is the German-made Blaser over/under. Machined to very tight specifications, all parts of the F3–stocks, actions, barrels, and forends–are interchangeable without gunsmith fitting.

Made in 12, 20, 28, and .410, the gun’s barrel can easily be changed for clays or game. F3s have a rifle-style trigger whose inline striker provides lightning-fast lock time. Concealed in the stock is a balancing system to compensate for longer or shorter barrels. My F3 has been to Argentina twice and been shot extensively–­possibly 15,000 to 20,000 rounds–over three years without a hitch. $7,250.

Remington got something right when it made the 870, and now the company has sold more than 10 million of them. The original Wingmaster introduced dual-action bars to prevent binding during the pumping cycle.

Early guns were pretty much plain, but as the years went by, high-grade competition models were added. Today the Wingmaster, with its highly polished blued metal and nicely figured walnut, is the top dog. On the other end, the 870 Express is a no-frills bargain—same shotgun, same parts, but with a hardy matte finish—that continues to be a hard worker in the field. From $411.

John Browning’s ingenious mind designed numerous shotguns, and one became the BPS. Loaded and ejecting through the bottom, the action is enclosed and protected from rain, dirt, snow, and such. Using dual-action bars and an ambidextrous top-mounted safety, the BPS equally suits right- and left-handed shooters. It comes in a 10-gauge for goose hunters.

At the other end is the .410 and all the gauges in between, including the 16. Offered in highly polished blued steel, or camo-clad to fit the situation, the BPS has a slick action, and it handles and feels very much like the venerable Winchester Model 12. From $569.