Big Green looks to the future with an ingenious and versatile 3 1/2-inch autoloader. 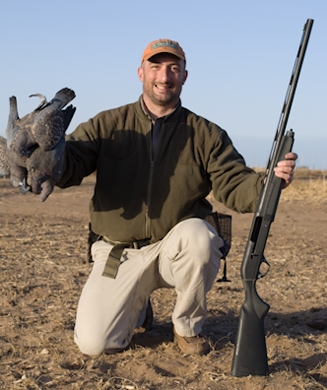 The idea behind gas-operated guns is itself quite sound, even elegant. By drilling a hole or holes in the barrel of the firearm, we vent some of the gases created by the burning powder into a mechanism that will cycle the action with the energy we’ve harnessed. With one pull of the trigger, we eject the spent shell, re-cock the action and load a new round from the magazine without the need to manipulate the gun manually.

But how much of that gas should we harness? How big a vent does a gun require to operate in this semi-automatic fashion? This is one of the key questions for any gas-operated design, particularly with modern shotguns, which might be firing 3 1⁄2-inch magnum loads in a duck blind one day and 1-ounce target loads at the gun club the next.

The pressures and gases produced by the range of shotshells we use varies so widely that our elegant–in theory–system requires some pretty serious workarounds in order to run reliably. The problem is that, on the one hand, an action tuned for magnum loads might not cycle with the comparatively small amount of gas pressure produced by pip-squeak target shells; on the other, a gun optimized for light loads runs the risk of being shaken to pieces by the bolt speeds generated by heavier shells–to say nothing of the effect on the poor shooter.

Gas-recoil woes
Some guns come with settings that vent different amounts of gas and require the shooter to toggle between light and heavy loads. This works but is hardly convenient, given the need to partially disassemble the gun to make the change.

Other designs rely on complicated mechanisms made up of springs, clutches and rings that use friction to self-adjust–the harder the load pushes, the more the system resists, and this way the gun automatically regulates for the strength of the load. These are prone to be finicky and have parts that wear out–and they’re built with more pieces than a jigsaw puzzle. And there are some systems that combine elements of both. Common to all these solutions is that none qualify as elegant.

A New Twist
Remington, which is no stranger to producing gas-operated shotguns, took a fresh look at the problem. The ingenious observation the company’s engineers made was that, when we shoot shorter shotgun shells–the light 2 3⁄4-inch loads–we want to use more gas to cycle our gun, while with longer, more potent shotgun shells, we want to use less. This might seem so obvious that it hardly deserves mention, but the folks at Remington took this premise one step further. What if we use the length of the shell itself to control the amount of gas we vent, they asked? And that’s exactly what they’ve done with the new Versa Max.

Traditionally, the vents in gas-operated shotguns are located somewhere toward the middle of the shotgun barrel, with the piston mechanism–the springs and clutches and so forth–nestled around the magazine tube in the front half of the forend. With the Versa Max, the vents–there are seven total–are located in the chamber of the shotgun. The vents are staggered in three rows in a 3-1-3 configuration.

When a 2 3⁄4-inch shell is fired, all seven ports vent gas to the two pistons located underneath the chamber. With a 3-inch shell in the chamber, the first row of three ports gets blocked as the hull opens up, meaning that only four vents are employed to propel the pistons. And with a 3 1⁄2-inch shell, only the final row of three vents is used.

Because the plastic hulls do the work to regulate the amount of gas, the system has only two moving parts–the two pistons that slide freely back and forth in their cylinders. It doesn’t get any more elegant than that.

Torture Test
But does it work? I went to Argentina with Remington executives and a small group of outdoor writers for the unveiling of the Versa Max in a public forum last summer. The guys from Remington were understandably anxious. High-volume bird shooting is the most rigorous proving ground for any field gun.

The Remington officials got a dose of bad news when we arrived in country: The shipping container with all our Remington shotgun shells was held up in customs. Except for the handful of boxes we toted in our luggage of Remington’s new Hypersonic steel waterfowl load (another innovative product I’ll write about in an upcoming issue), our guns were going to have to run on the locally made–and notoriously unreliable–shotgun shells.
With swarms of noble-looking wood pigeons circling overhead some days and endless waves of doves flying past on others, we proceeded to put thousands of rounds through our guns. (We also snuck in a couple of sessions of waterfowling with the steel shot.)

One afternoon, while shooting by a roosting area, my shotgun digested 93 boxes of shells. This stuff was about the dirtiest ammo I had ever seen. At one point my shotgun caught fire due to the build-up of unburned powder caking on the inside of the chamber. The gun was so hot that when I opened the action to load more shells, the combination of oxygen, heat and volatile gunky residue ignited, and flames spurted out of the action like a signal flare. Once the conflagration died down, I gave the gun a quick once-over, deemed it fit for action and kept shooting. It’s worth noting that the tiny gas ports in the chamber never fouled during the trip.

Given the abusive circumstances, the guns performed amazingly well. The small number of misfeeds experienced seemed dependent on the given lot of ammo we shot. We also had some light primer strikes, which was probably due to both the ammo and the prototype bolt heads in our guns. I doubt either will be an issue going forward.

Comfortable, Yet Tough
So, yes, the Versa Max worked, and worked well, but for reasons that extended beyond reliably firing and cycling. Brian Lasley, who led the team that created the Versa Max and was on the trip, described it as a “shooter’s shotgun.” It would be easy to dismiss that as marketing hype–and in most cases that would be warranted–but in this instance his words rang true.

The Versa Max is hardly flashy. It has a utilitarian and functional exterior, as befits a shotgun destined for the rigors of a duck marsh. The barrel is coated with a TriNyte finish, the aluminum receiver is anodized, and many of the interior components are plated with nickel Teflon, all of which bestow excellent corrosion resistance. Even the buffer tube located within the stock, which is made of aluminum, and the stainless magazine tube are designed to withstand a dunking.

The forend and grip have gray overmolded insert panels that are made of a soft and tacky material to improve the shooter’s grip when it is cold and wet.

But beneath those plain looks is a shotgun that is remarkably comfortable to shoot. The recoil pad is made of Remington’s “Supercell” material, and is a plush 1 1⁄2 inches thick; it did an excellent job of taming the jolt of even the heavy duck loads we shot.

Remington smartly used the same cushy material to make a cheekpiece insert that fits into the stock, so that even after thousands of rounds, my face wasn’t sore. Even smarter, Remington is offering these inserts in three sizes, so the shooter can easily adjust the gun’s comb height and point of impact.

The length of pull can be altered by adding spacers between the butt pad and stock, and the shotgun has an innovative and easy-to-use system for adjusting cast and drop as well. Instead of the complicated system of shims that fit between the stock and receiver on many guns–the majority of which I’ll wager are never used, or if they are they’re adjusted once and left alone–the Versa Max has a single bolt that attaches the stock to the buffer tube that extends out of the rear of the receiver. The metal plate in the stock that the screw goes through has a number of holes to choose from each of which will alter the cast and drop a touch. Between the two plates that come with the gun, the shooter has nine available adjustments.

Natural Pointer
The Versa Max earns high marks for its handling characteristics as well. I found it pointed instinctively and fluidly on birds, and even though it weighs 8 pounds, it had no problem taking on the most acrobatic and erratic fliers.

Putting thousands of shells through a gun every day for the better part of a week can chew up your hands, face and shoulders, but the fact that none of the shooters in our group experienced much discomfort is indicative of the gun’s excellent ergonomics and design.

Will the Versa Max achieve the same enduring fame that the 1100 and 11-87 have earned? It’s too early to tell, but I don’t think it is a stretch to say that this new action will be a successful platform for a variety of configurations and gauges for many years to come.

How the Versa Max Gas System Works
The Versa Max uses the length of the shotgun shell to regulate the amount of gas used to cycle the action. The seven ports located in the chamber are staggered in a 3-1-3 configuration. With 2 3⁄4-inch shells, all seven ports are employed to cycle the short-stroke pistons located beneath the chamber. When a 3-inch shell is chambered, the first row of ports is blocked as the shell opens up, meaning only four ports are used to cycle the action from the more-powerful shell. With a 3 1⁄2-inch magnum, only the last row of three ports vents gas, and in this way the action self-regulates in order to cycle shells of varying powers reliably without generating excessive bolt speeds with more potent loads. The gas is vented via two ports located on either side of the piston chambers and into the forend grip. Two cutouts in the forend expel the gas up and out.

**
What It Comes With:** The price of the Versa Max includes a total of five screw-in choke tubes and the single flush-mounted cheekpiece insert. You can purchase additional inserts to adjust the comb height of the shotgun, and I suggest giving at least the mid-height one a try. During a recent shoot in Argentina with the Versa Max, every shotgunner who swapped inserts to a higher version was glad he did.

Features of Note
Perfect Fit
Length of pull can be adjusted by adding plastic spacers, while the comb height can be altered with cushy cheekpiece inserts that quickly snap in and out of the stock.

Flexible Joint
The stock and receiver are designed to fit together tightly yet allow for a bit of movement in order to adjust the drop and cast of the shotgun (see below). A flexible gasket seals the stock against the rear of the receiver.
**
Drop and Cast**
These two metal templates fit inside the stock and have guide holes for the bolt that screws into the buffer tube pictured above. Depending on the hole selected, the shooter can adjust the drop and cast (or both) of the shotgun for a precise fit. A total of
nine adjustments is possible.

Simple Operation
The gas-operated system on the Versa Max has only two moving parts–the two pistons that slide back and forth in their tubes. An Allen wrench is all that’s needed to service the mechanism. The rings around the piston are pretty much self-cleaning, scouring the carbon as they move back and forth; the cuts on the outside of the tubes are where the gas is vented into the forend. 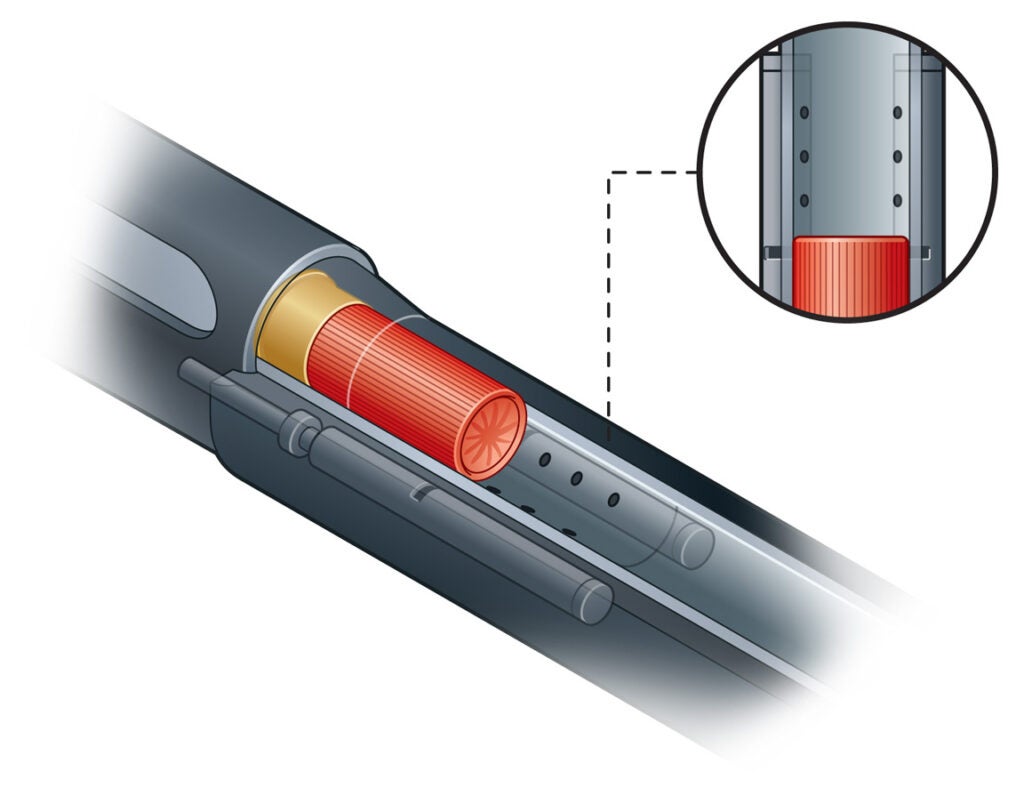