A classic pump returns in 28-gauge. 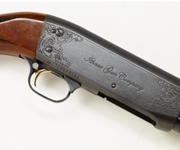 Perhaps the most charitable way to put it is to say that the Ithaca Gun Company has had a star-crossed existence since it first opened for business in 1883, along the banks of a creek in the town of Ithaca, New York. The ups and downs of Ithaca have filled the pages of many books. Despite the lousy straits the company has found itself in over the years — there have been many such low spots — Ithaca retains an army of devoted followers who hold its guns in the highest regard and consider them superior to anything made by its rivals. These shooters are the gun world’s equivalent of Cleveland Browns fans — loyal and proud to a degree that outsiders sometimes find baffling.

Beloved Design
What inspires such dedication? The bedrock of Ithaca’s success is the Model 37, a slide-action repeater that has been in production for longer than any other pump gun currently made. Like so many classic firearms, it is one of John Browning’s creations, originally the basis for the Remington Model 17 (which Browning built in collaboration with John Pedersen) and adapted by Ithaca once the patents expired. Ithaca meant to start producing the gun in 1933 and call it the M33, but found itself tripped up by a patent it didn’t know existed. This resulted in delaying the new shotgun until 1937, and thus, in keeping with Ithaca’s propensity for jinxes, the M37 was born.

Despite that bumpy start, the M37 established itself as one of the world’s most popular repeating shotguns. The bottom-feed/bottom-eject design helps keep debris out of the action and gives both sides of the receiver a clean, uncluttered look. It found an especially appreciative audience among left-handed shooters, who valued its ambidextrous operation.

Over the years, the M37 appeared in many guises and gauges — it served in combat, rode in police cruisers and accompanied countless deer and bird hunters afield. It was chambered in 12-, 16- and 20-gauge versions. But one variant missing from the M37 family was a 28-gauge — until now.

A New Gauge
Ithaca is no longer based in New York. Mike Farrell, Ithaca’s energetic president, has been overseeing the company’s revival since he and his cousin, David Dlubak, rescued it from financial crisis. They set up shop in 2007 in Upper Sandusky, Ohio, with little more than a batch of drawings, some dedicated employees and a pile of brand-new, expensive machining equipment. Starting from scratch in this manner has proved to be a good thing. Despite a couple of hiccups in getting the revamped company off the ground (this is Ithaca, after all), the guns coming out of the factory are lovely to behold — more so than the new Featherlight 28-gauge.

The 28-gauge is built on a scaled-down receiver and is extremely faithful to the M37 platform, loading and cycling in a manner that will be instantly recognizable to those who — shot M37s in the past. The look of the gun is true to the M37 as well, right down to the interlocking screws that hold the gun together on the side of the action. A close look at those screws, which on mine were cleverly indexed so that the slots were parallel to each other, also reveals the quality of the machining in their construction.

Examples of this craftsmanship abound on the gun: the well-cut checkering on the safety, the evenness of the machine-cut engraving on the receiver, the eye-pleasing jeweling on the underside of the bolt assembly and the smooth mating of the interrupted threads between the barrel and receiver.

Lovely Shooter
One of the most impressive bits of engineering on the Featherlight is the joining of the rib and barrel. Instead of soldering the rib on, which is the common practice, the rib has a precisely machined dovetail running up its length that slides over recesses on the stantions machined into the barrel. This adds cost to the construction, but the resulting rib is as strong as a tank and can be swapped out with another style via a simple set screw.

The M37 is a lovely shooter as well. My sample weighed a bit under 6 pounds with a 28-inch barrel, and came with a decent trigger that broke at 5 pounds 3 ounces. Its swing, balance and other handling qualities were all top-notch, and the gun fairly begs to be taken through corn stubble and alder thickets in the company of a good bird dog.

Despite the plainish wood on my A-Grade gun, it attracted a lot of attention at my gun club. The reason is that, unlike so many new guns made today, which look like they were made by (and perhaps for) machines, the Featherlight has soul. The gun is clearly built with a human touch, and while that labor and hand-fitting costs (my version retails at $999), it adds something to the gun that you just don’t get otherwise. The result is the finest pump-action you can buy today. I hope other gunmakers take notice and follow suit.