This semi-auto in .204 Ruger has prairie dogs quaking in their burrows. Read John B. Snow's full review here. 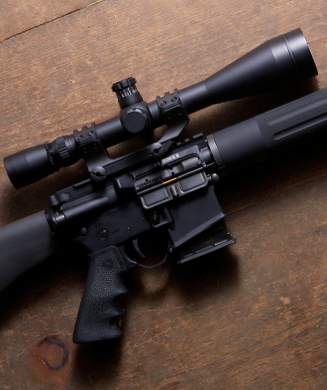 When it comes to versatility, ARs rule the roost. The rifles and pistols built on Eugene Stoner’s platform are the most diverse in the firearms world. What first took form in our popular imagination as the M-16 infantry rifle has, over the last half century, morphed into a cornucopia of guns of every size, caliber, configuration and color. Some ARs are even blessed with a great sense of humor. You would have to be a cranky stiff not to appreciate the charms of a pink Hello Kitty entry carbine.

The modular design of ARs is the key to their adaptability. They are like Lego kits for gun nuts, thanks to their mix-and-match design. A shooter can swap barrels, stocks, handguards, optics, triggers and other components as quickly as a pit crew changes tires at Daytona. When it comes to ARs, if you can dream it up, chances are you can build it.

That’s not to say that ARs are flawless. They still have a ways to go before they can replace my bolt-actions as go-to guns for big-game hunting, for instance. Compared with an elegant turn-bolt, the current crop of production ARs are heavy for their caliber, make too much noise when being loaded and are clunky and can be damned uncomfortable to carry. But dress up an AR for varmint shooting, as Rock River Arms has done with the new Varmint A4, and these drawbacks either fade in relevance or transform into assets. An AR’s weight, which can be excessive in a deer-hunting rig, helps control recoil, mitigates barrel heating and lets the shooter spot hits on target.The small cartridges the AR-15-sized action favors are ideal for varmint duty. And the high-capacity magazines and an ability to make multiple, fast follow-up shots are just what you’re looking for when facing a field full of ground squirrels on the move.

AR Accuracy
But these qualities don’t amount to much if the rifle doing the shooting isn’t accurate. Varmints are challenging targets–for every prairie dog that stands on its mound like a cigar-store Indian, there are 10 wary rodents who poke their heads out of their burrows just enough to give you the evil eye while barking warnings to their pals. If your rifle can’t hit these puny targets, then those varmints are safe.The AR platform can deliver the accuracy required. Some of the most common methods used to improve AR performance and shrink groups include free-floating the barrel so that it doesn’t contact the handguard, and going with a high-quality, heavy barrel. Both of these are features of the Varmint A4, which is now available in .204 Ruger.

The A4 is a stout beast, weighing nearly 10 pounds unscoped. Much of that heft is in the rifle’s 24-inch stainless-steel bull barrel and in the long aluminum handguard, giving the rifle an extreme weight-forward balance. If the rifle were to be shot from any position other than prone or off bags for support, this would be a problem. But this rifle is meant for use with a bipod, which can be attached to the swivel stud in the handguard, or some other type of solid support.

The Varmint A4 delivered its .204 bullets into satisfyingly small groups both at the range and while I used it to thin the ground-squirrel population near my home. The rifle showed a preference for the 32-grain loads from Hornady and Federal, which consistently grouped under an inch with five shots. The smallest group was .581 inches with Hornady’s 32-grain V-Max.

There’s no shortage of great varmint cartridges out on the market–everything from the venerable .220 Swift down to the .17 HMR. In this crowded field, which includes such stalwarts as the .223 Rem. and .22-250 Rem., the fact that the .204 has thrived is a testament to its balanced design. It drives its bullets astoundingly fast–up to 4,400 fps–and yet because the projectiles are so tiny, they generate little recoil and don’t overly heat up the barrel. And the terminal performance of the cartridge on varmints is explosive.

Another benefit of the .204 Ruger is that it feeds perfectly in AR magazines for 5.56/.223 rounds, meaning any extra AR mags you might have lying around can do double duty in this rifle. The rifle operates on a direct-impingement gas system and functioned reliably with every load I tested it with.

The Varmint A4 comes with a flat-top upper with a Picatinny rail for mounting optics. However, in order to get a proper varmint scope on the rifle, you’ll need a base that will position the scope forward enough for adequate eye relief.

The stock on my sample came with a standard A2 configuration, which works fine for shooting prone, though the integral sling loop just gets in the way and should be removed (which is simple to do) so that the stock will ride a rear bag more smoothly.

The ergonomics of the rifle are no different from those of any other AR, which is to say they are quite good. The pistol grip positions the trigger finger nicely within the A4’s oversize trigger guard, and the safety lever, bolt-release tab and charging handle all worked smoothly and were easy to operate.

The finish and metalwork on the Varmint A4 were also excellent. The textured surface on the handguard is particularly comfortable.

The base price on the rifle I tested was $1,115. Given the modular nature of ARs, Rock River Arms makes it easy to mix and match accessories, so if there is a component or feature you don’t care for, chances are you’ll be able to swap it out.

As delivered, the A4 is an accurate, reliable rifle in a caliber that is perfect for both varmints and the AR platform.